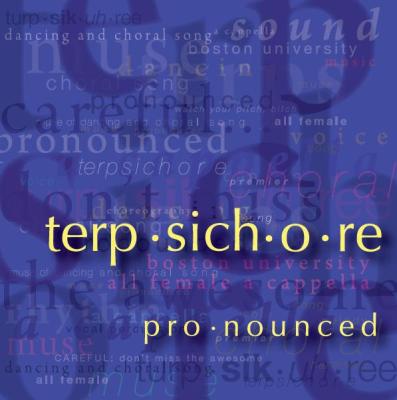 Terpsichore's release is enjoyable but also a bit frustrating. Terpsichore suffers from a common form of a cappella schizophrenia. The opportunities and obligations of the studio just don't match those of the live venue. Terpsichore struggle to find identity in the studio using skills clearly honed in live performance. With membership changing every year, if not every semester, it's an incredible challenge. Better than average leads are this group's strongest asset, but arrangements that don't work in the studio are its downfall.

The worst of the arranging problems is really one of direction: the background syllables are awkwardly over-pronounced. Over-pronounced syllables are distracting. Sometimes they're unintentionally humorous. Sometimes they're annoying. Even when a listener can overlook them, they're not helping set the mood of the song. That's a problem. For Terpsichore, it's not always. But it is pervasive.

That said, Pronounced also has a wealth of worthy moments. I particularly enjoyed the lead on If You Really Love Me (which lifted the track's score a notch). I also enjoyed the lead on Something to Talk About. Everybody's Free (to Feel Good) shows the tightly rehearsed musicality of the group, though the piece ends all too soon.

Let Go displays graceful work in both the lead and the "string" parts. The end of the track is a nice reminder of how beautiful this group sounds, unadorned. There's Hope is one of my favorite tracks for its simple, upbeat feel and great energy. End it On This gives us a lead that sounds like a genuinely appealing cross between Chrissie Hynde and Gwen Stefani. Vogue, the Madonna dance classic, boasts some cool electronic "jen-jen"s and the lead's timbre sounds pleasingly similar to Madonna's while still maintaining its individuality.

Some additional specific critiques: All I Want for Christmas is You uses a chorus effect on the voice which detunes it significantly. It's unclear whether the problem originated with the engineer or with the lead (and may have been the engineer's "solution"), but either way it's a pitchy ride. Though Take On Me has a charming lead with an original stylistic interpretation, the arrangement has an unforgivable section of what can only be described as a vicious attack of miniature prepubescent squids. (The squiddies haunt me even now.) When I Look to the Sky has still another enjoyable lead, but suffers from an ending that sounds like someone simply tripped over a plug.

With Pronounced there's a lot to like and a lot to overcome. If Terpsichore can find its studio identity, a sound that really works for them in that environment, the group's next release is sure to turn heads.

Absent is the reserve so conspicuous about so many female groups on Terpsichore's Pronounced. These girls clearly enjoy what they do, with no equivocation in their song choices or in their arranging decisions.

The best word I can use to describe this album is "endearing". The group's confidence is audible, especially in the soloists, and even though the results are mixed — clunkers like Something to Talk About and End it On This next to great covers like Let Go and Vogue — Pronounced is a very listenable album.

The album's most obvious weakness is its production, especially evident in the percussion. The samples sound pretty lame in a number of the songs, notably on Take On Me and When I Look to the Sky. Some subtle but persistent tuning artifacts draw too much attention to the backing block at times, and the grossly over-chorused lead on All I Want for Christmas is You is pretty distracting as well.

I do not quite understand the inclusion of Everybody's Free (to Feel Good), a short, strange song, and vocally indulgent, in typical contemporary Christian fashion. The key of City of Blinding Lights is much too low; the alto range just doesn't jive with the soaring U2 vibe.

Outstanding lead vocals carry the album start to finish. Loads of solo talent, well-matched to each song. The two weakest songs - Something to Talk About and End it On This — suffer from awkward syllables and clunky arrangements, but again, the soloists make them listenable. It would be nice to hear more of the attitude and style of the leads translated into the backing block, though I have to admit, the guitar solo in End it On This is probably the best female vocal guitar solo ever.

Terpsichore's Pronounced boasts a very ambitious track list that's filled to the brim with songs by world-famous pop icons. There are undeniable risks and dangers associated with covering the likes of Mariah Carey, Bonnie Raitt, and Madonna, but this group of gals from Boston University obviously wasn't too worried, and for good reason. The soloists almost invariably kick ass, not only because they sing well, but because they are eerily capable at producing believable imitations of the original artists. Now, there's definitely something to be said about adopting your own style — in fact, I usually prefer soloists that don't try to mimic another singer — but in Terpsichore's case, it would be a terrible waste not to showcase these abilities, and they knew it when they chose the songs. In particular, Lauren Pearl's homage to Gwen Stefani is so believable (or unbelievable?) in End it On This that I still sort of think the No Doubt star is secretly in the group.

And there's plenty else on this album to render it an engaging listen. Arrangements are very strong, at least from a technical standpoint, and effectively keep the music driven from start to finish. City of Blinding Lights, for example, will bowl you over with tons of layers and intricate rhythms, making it one of the strongest tracks on the record. Similarly well-executed is All I Want for Christmas is You, which, while it's a perplexing choice out of an endless selection of Mariah Carey hits, is an early Yule gift for the ears, thanks to a strong solo and an animated block sound. The folks over at JowNow also did a commendable job with the production; everything is bright, clean, and well-tuned, while still preserving the natural variables that make a cappella music exciting (such as tone and dynamics). What makes the music truly compelling, however, is that it's just plain fun, from beginning to end. The girls in Terpsichore are obviously having a blast making music together, and happily, it's the kind of raw energy that's contagious to the listener.

Terpsichore clearly knew how to bookend the album, with the aforementioned City of Blinding Lights leading off and a near flawless rendition of Madonna's Vogue as the grand finale. Sometimes, however, the "meat" of the album is a little less engaging. Take On Me has a rare average solo performance, and the arrangement doesn't flow quite as well as the others. The block is way too loud on Let Go, to the point that you can hardly hear the solo, but at least the backup is fun to listen to. I also could have used a little less ultra-produced percussion, especially because everything else sounds relatively natural.

Overall, though, these demerits are hardly an issue, because Terpsichore's Pronounced is a lively and spirited album that's more of a guilty pleasure than it is a sophisticated, refined body of music. The group's enthusiasm reminded me about what's so great about a cappella as a medium, and I believe it's safe to assume it will do the same for many others.