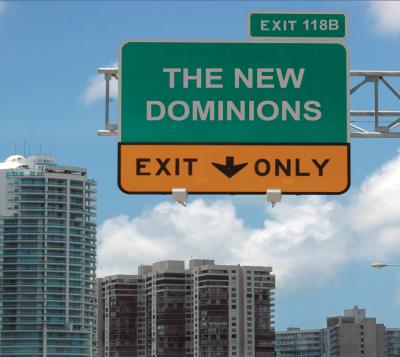 From start to finish, the UVA New Dominions's Exit Only seems determined to cram itself into the crowded realm of mediocrity. Falling victim to several familiar collegiate pitfalls, the Newdos squander several opportunities to create some great music.

Most of the fault lies with the extreme overemphasis on consonants in the arrangements. Fields of Gold provides the most glaring example, with its constant, unnecessarily hard consonants. Near the end of each listen, I'm praying for an end to the interminable default "bah", "zah", and "jin" syllables present in nearly all the songs. The repetitiveness, specifically on Title and Registration, Get Out of My Mind, and Somebody's Baby, adds to the problem.

The soloists come across well, if a little adolescent in some cases. Jessica Drennon stands out on Fields of Gold and Happy Ending, as does Colin Addis on Mr. Roboto: these also happen to be the strongest tracks on the album. The lead on Mad About You delivers a solid take as well, but the backing female vocalists are so distractingly devoid of style that the song falls flat.

James Gammon's production work is solid overall, but verges on sterility during the opening two tracks. The editing is precise, though there is some fairly egregious disagreement on the swing value in Only Living Boy in New York, and the entire lead of Call Me When You're Sober sounds rushed. I love the live placement of the intro to Don't Wake Me, but the lead in Feeling Good is so muffled that I have to strain to hear it.

Less repetitive songs and more legato elements in the arrangements would make the New Dominions's next studio effort a more enjoyable listen.

The UVA New Dominions's Exit Only features a much more cohesive and contemporary track listing than 2006's Almost Awesome. Even the older choices, such as Gold Dust Woman and Only Living Boy in New York, are interesting and unexpected. Unfortunately, arrangements are lackluster, energy is low, and production generally keeps things flat. The boost from the New Dominions's repertoire overhaul can only raise Exit Only to a solid spot among your collection of average a cappella albums.

Kids is Exit Only's strongest song, despite an arrangement that's at times too thin to support the endeavour. Still, it's impossible not to sing along. Kudos to the New Dominions for creating a cheery interpretation of the ominous, electronic original by MGMT (formerly The Management), but there are serious deficits on the arrangement's syllable front. The basses sound silly on their repeated "dah" syllables, and the effect is multiplied by an attack of "dah"s and "dee"s from the tenors and altos. (The New Dominions's love of the "d" consonant is also apparent on Title and Registration.) Kids, which is forced to rely much too heavily on its percussion, seems destined for mediocrity until it's saved by an infectiously catchy chorus and the smoky voice of Jessica Drennon. Drennon was a standout voice on Almost Awesome, and she excels here on Kids, as well as Fields of Gold and Happy Ending. It's exciting that Drennon has another year in the New Dominions; her voice alone is enough to have me looking forward to album number eight.

Exit Only's significant promise sinks under the weight of the album's flaws. Feeling Good's famous key change is the definition of anticlimactic; the energy is so absent that it's nearly tangible. The Only Living Boy in New York is weirdly inconsistent in mood and ends on an overly metallic chord. Call Me When You're Sober is sung entirely in a meek and exhausted head voice; the solo is devoid of all the required ferocity for the delivery of its message. Don't Wake Me is forgettable, save for the fact that it sounds as if it was sung in a bathroom.

The New Dominions are an endearing group. Listeners will be won over by the sweetness of Somebody's Baby, the playful Mr. Roboto, and the hopeful, if heartbroken, tone of Happy Ending. Exit Only represents a promising improvement, and the song choices, which are better than those on most collegiate a cappella albums, will keep listeners engaged. Improvements in arranging and energy will propel the New Dominions toward greatness.

The New Dominions recent release, Exit Only is a good collection of songs by artists you know and a few you may not know. There is a steady hum of quality musical mechanics purring throughout the recording, but in the end The New Dominions don't seem interested enough to utilize all the gears at their disposal.

I am in love with Jessica Drennon's voice. She completely transforms the tried and true Fields of Gold and raises the track from average to great. In fact, she makes her other two solos (Mika's Happy Ending and Kids by The Management) her own as well. She is a great talent, and The New Dominions were wise to showcase her throughout the album.

Her energy and emotion encompass exactly what is missing from The New Dominions as a whole. The backing vocals sound like a band on stage going through the motions during performance #597 out of 1,000. The notes and rhythms are right on (almost robotic), but you can tell they aren't locked in and engaged. The rest of the soloists are serviceable, but not memorable. I enjoyed the timbre of Alex Skidmore's voice on the Simon and Garfunkel song Only Living Boy in New York as well as Brianne Oltermann's voice on Gold Dust Woman. They are nice, and so are the rest of The New Dominions. This is the challenge The New Dominions face; how to go from nice and good to "Holy s**t!" and great. They are not far from reaching this goal, although this final step is often the hardest to achieve.

Production-wise, Exit Only feels like it's just entered the freeway with miles of road to explore. Time and a full tank of gas may just be what they need to reach the next level. There are hints of what is possible for their next album, and The New Dominions should be encouraged to continue on down the road. Call Me When You're Sober and Mr. Roboto are the best tracks not featuring super-soloist Drennon and showcase exactly what is possible for the future.

Arrangements are good, with Richard Staines and Colin Addis shining. They split the entire album and while they have different styles, there is some very good technique being showcased. Many times the hallmark of a great arrangement is when you don't have to think about it. These guys make me forget about the arrangements and that is a very good thing, indeed.

Exit Only is a very good album full of solid production, a great headlining soloist, and arrangements that are forgettable in a good way. It's worth picking up, if only to hear Jessica Drennon.