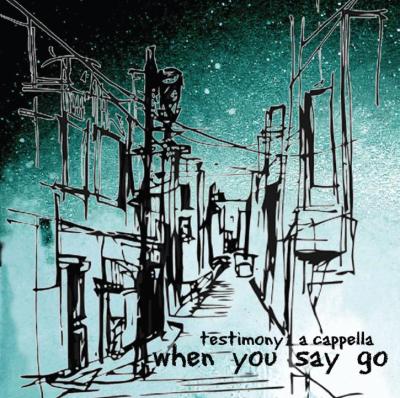 Before hearing Testimony A Cappella's When You Say Go, my only previous experiences with Christian pop/rock were Time-Life infomercials and the Faith Plus One episode of South Park. Hopes weren't high when I cracked open the cellophane. Much to my chagrin, the music on When You Say Go is pretty good. Add in great engineering and strong performances from this Stanford ensemble, and you have a winning album.

Repertoire is the fundamental building block of any album, and Testimony A Cappella chose well. The album opener, Dead Man, rocks with a nice mix of rhythmic and wall-of-sound style singing. Breathe Me is a stirring track, dripping with feeling and filled with anticipation of its excellent climax. This track works well despite a solo that was almost painful to hear. Of course, a group's song choices are nothing without compelling arrangements, and Esther Kang and Carl Erickson (who provide the lion's share) do a great job of keeping everything interesting and moving forward.

Production really sets this album apart, as Bill Hare has worked his magic yet again. Everything sounds so perfectly tuned and blended, yet still natural. Percussion is especially awesome, always appropriate for the sound. A few cool effects are nestled throughout, flair that accentuates the singing rather than overpowering it. Singing isn't always amazing — for instance, the "Alleluias" in the descant of Rest sound petulant and twangy, and throughout the album vocalists have an annoying tendency to scoop between notes — but at least everyone seems to be enjoying themselves. Fast or slow, guitars or strings, it all sounds strong.

Not to be too cheesy, but Testimony A Cappella opened my eyes to the possibility that some of America's best songwriters might be fleeing Top 40 for Christian music: this is good, fun music to listen to. Add in Testimony's top-notch treatment, and you have a great album.

Stanford is an exciting place for a cappella. In addition to talented mainstream pop/rock cover groups, there are successful specialized groups creating enjoyable albums. Testimony is a Christian a cappella group. On When You Say Go, they work popular bands like Jars of Clay and Sixpence None the Richer, while mixing in inspirational/message-based artists like Sarah McLachlan. The result is a moving array of music, with challenging arrangements and moments of sincere conviction as Testimony explores their faith.

When You Say Go presents a carnival of sounds. The energy, the volume, the intricate textures, the loud blocked chords, all stem from the troop of voices powering their lungs in cadence — a whopping 23 voices are listed! Sometimes we hear large groups who do very little for their collective abilities; Testimony makes the most of their instruments. In particular, the opening two tracks, Dead Man and Silence, give you your money's worth and more. Dead Man from Jars of Clay is the perfect "May we have your attention?" opener, with a powerful and catchy chorus that'll shake your headphones. Sarah McLachlan's Silence captivates with a rich atmosphere and sultry soloist. These two works represent a cappella at its finest.

A few things slow down Testimony after their impressive opening. The persistent and too-loud snare drum on Control by Muted Math is distracting. Breathe Me from Sia has a stunningly gorgeous background with shockingly gorgeous production, but the grating solo delivery limits an otherwise profoundly good arrangement. And Skillet's Rest is void of the earlier character Testimony demonstrated. But after these setbacks, When You Say Go more or less paves smoother ground.

The latter half of the album sparkles when the high-energy, feel-good tunes come dancing out. The More, After the Music Fades, and I'm Not Going Down all share an infectious, positive vibe that suits Testimony well. It's a joy to hear. And it's nice to see a female leading the vocal percussion train in a mixed group, with Jennifer Kim drumming on nearly every track.

Complete with beautiful album art and thoughtful liner notes, When You Say Go is a strong offering for any a cappella fan.

Stanford Testimony has the most impressive liner notes I've seen in awhile. Seven pages! Really? Most groups opt for the easy two-page insert, but not Testimony. They provide lyrics to every song. I don't think I've ever seen this on an a cappella album, with the exception of groups who pen original songs. Still yet, preceding each set of lyrics is a Bible verse linking the lyrics and meaning of the song to their faith. Wow! That said, you won't feel like you're listening to contemporary Christian while you're listening to When You Say Go. The proselytizing is kept to a bare minimum, which I believe will help Testimony spread their message much further.

All right, on to the music. The listener not up on contemporary Christian should recognize some of the artists featured here: Jars of Clay, Sarah McLachlan, and Sixpence None the Richer. The rest are equally radio-friendly. Control by Mute Math has a repetitive electronica sound that is sure to get you moving. However, Breathe Me has an interesting ending using Imogen Heap's Hide and Seek that doesn't serve the song at all. Add to that the fact the soprano doesn't quite reach the high sliding intervals which are a trademark of the piece leaves me feeling it could have been left out altogether.

The second half of the album is much better than the first half. The better half of the album begins at the doorstep to We Live. The first eight bars are a little rocky, but oh, is this track worth the wait! A contemporized Sweet Honey In The Rock sound with studio magic and a ball cap tilted to the side with attitude never sounded so good. An encore to the track receiving the most listens is After the Music Fades which is as inspiring and uplifting experience as any I've had listening to an a cappella album. Need something grittier? Check out Never Alone or I'm Not Going Down. Did I mention the second half of the album is fantastic? An EP with only these tracks might have receieved 5s across the board from this reviewer.

Production is good, but I would have liked to hear a clearer representation of the block in the background of most of the songs. Everything sounds a little hazy and out of focus for my tastes, as if the group is singing in an underground tunnel. While this effect does fit most of the song choices, I'd prefer to hear a more aggressive, crisper sound from this group.

The liner notes show a group photo featuring 23 singers (!). While it states "2006-2008" above the photo (allowing for some overlapping of members), it seems like an awfully large group for the sound represented on the album. The arranging on When You Say Go is rhythmically sophisticated, but lacks lusciousness in the block on many tracks, which could possibly take each song to a new level. When most of the backing vocals are relegated to "juh-nuh-nuh-juh-nuh-nuh-nuh" or similar rhythms in the chorus, the chords become less distinguishable and what should be the most recognizable part of the song loses some of its punch. I'd encourage Testimony to listen to the ‘Bubs Pandaemonium for how to accomplish the best of both worlds in arranging. I have a feeling this will be a quick fix for Testimony as they learn to best utilize their singers.

Stanford Testimony reminds me of a younger version of the Tufts Amalgamates. Each song has a relaxed feel to it, but with an attention to detail that makes you want to go back for repeated listenings. The ‘Mates are experts at the slow and steady climax, and Testimony rarely disappoints in this regard. The second half of this album is worth the price of admission itself, so if you can get beyond the minor annoyance of skipping past the first few songs I think you'll really enjoy this album.