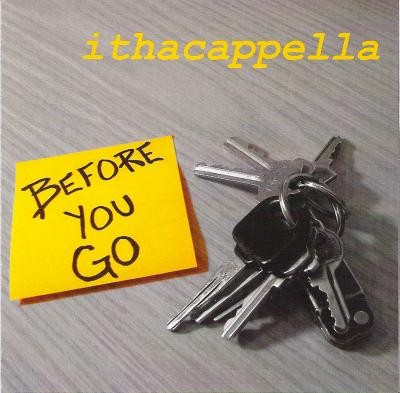 Five years ago, in what otherwise was a rather lackluster review of Left On Gravel, I suggested that if Ithacappella could sharpen up their arrangements, limit their repertoire a bit, focus on tuning and find a good studio, I would be quite interested to see what they came up with next.

Well, mission ... in progress, if not entirely accomplished.

On the arranging front, the group has progressed quite a bit but they also still have a ways to go. Christopher Rossi's take on the Temptations' classic Get Ready is probably the best work of those who graduated this past year, showing tremendous creativity with varying rhythms, nifty syncopations and even a deftly-executed interpolation of Rare Earth's I Just Wanna Celebrate (that stands in sharp contrast to the awful Sweet Child of Mine interpolation in School of Rock and a yawn-inducing pairing of The Freshman and Hey Jealousy). Much of the rest from Rossi, Tim Nowak, Garrett Deming, and Adam Strube is pretty straightforward: nice, ringing group harmonies within unison movement, word echoes, and generally unengaging background vocals. The other exception — which bodes extremely well for the group's future — is the work of who turns on the best overall arrangement on Dig and even manages to make a hackneyed classic like She's Got A Way seem at least a little interesting well into the second verse. Yes, Rob reviews for RARB but no, this is not some sort of reviewer favoritism — I've marveled at Rob's talents since his high school days with Ascending Height and long before he joined RARB.

As for the repertoire, it's not quite cohesive, but it's a big improvement over the last album. For one thing, no tone poems and art songs to completely stagnate momentum and energy. And in general, while the material does span several decades, nothing sticks out as a dreadfully odd or poor choice.

The focus on tuning and sound/production critiques goes hand-in-hand to some extent because solving the latter can sometimes help with the former. This time around, the guys did not record in a school auditorium and they enlisted the help of Rockapella VPer-turned-producer Jeff Thacher, who offers a huge upgrade over their prior effort. There are a few puzzling production choices — what sounds like a very engaging background on Hold On, I'm Coming is mixed into oblivion, the compression on School of Rock makes a so-so song even more difficult to endure — and since Autotune does sound as though it's been used (tastefully in some places, less so in others), the little tuning issues in the groups "naked-er" moments are less forgivable. But overall, the sound is a vast improvement and tuning missteps are the exception rather than the rule.

One other shout-out to Travis Knapp for his original Before You Go. It's not the sort of song that's going to turn him into the next Sara Bareilles, but showcasing a rich, Buble-esque low end and a nimble soulfulness on the high end reminiscent of John Legend, both Travis' composition and performance make up one of the better a cappella originals I've heard in some time.

Why then does this CD only merit a "3"? Well, it's okay, and has a few high points, but on the whole, especially with how far collegiate a cappella has come in recent years, it's hardly anything particularly special. Maybe a "high 3" if there was such a thing. And while I don't in any way take credit for the group's improvement over the last 5 years, since it worked the last time, I'll try it again: give Rob Dietz the reins for the next year or two and I'll be even more interested to see what comes next.

Ithacappella and I go way back. I reviewed their debut album, ...The Band Never Showed in 2001, and their second album Left On Gravel in 2003. Both of these albums were solidly average, in my opinion, so I was curious to see how Ithacapella evolved in the five years since they last submitted to RARB.

As far as live performances go, they tout a first place win in the ICCAs, and I remember reading something about them performing with Incubus, which is pretty awesome. But how would all this translate to recording?

Well, Before You Go is a significant improvement over their previous releases, and the guys should be proud of this. The quality of a cappella recordings, however, has also improved, leaving the group, once again, at average.

Ithacappella has the basics under control. Pitch is fine, blend is pretty good, the arrangements are a bit too simple but get the job done. But there is nothing that makes these tracks extraordinary. The label "inoffensive", which I applied to Left On Gravel, also applies to Before You Go — it just doesn't leave much of an impression.

With 19 voices, I wanted a bigger, more full sound. All of the tracks sound a little thin, a little empty. The vocal percussion contributes to this problem. The production choices for the VP make it sound quite hollow and overly sibilant throughout (this was a problem I heard in a another album I reviewed recently — is hissy VP a trend?) The soloists are pleasant enough, but none of them make my knees weak or send chills down my spine.

The one song that lets me glimpse what this album could have been like is the title track Before You Go. It is beautifully rendered, emotionally sincere, and lovely.

In sum, if Ithacappella can translate what they do live to a studio setting, I am certain they would blow everyone away. Unfortunately, they did not achieve it with this album.

PS: Gentlemen, if you want to make an outtakes track and send it to the group, feel free. But please don't make the general public listen to it.

Ithacappella's Before You Go is a prime example of a trend that has become all too common: a group with the talent for a bitchin' album, but a homogenized sound that sounds much like everyone else. Before You Go features excellent arrangements and good singing, but remains lifeless and uncompelling.

Since this is Ithaca College, I expected solid arrangements, and I was not disappointed. Five different group members contribute, and they all have talent. The bookends are especially tight. Hold On, I'm Coming nearly manages to capture the energy of the original with nice layers, and Get Ready adds interesting flair (and come cool solo trading) onto what the Temptations did so many years ago. I did have one quarrel, however, with arrangements. While it is fun and perhaps even witty to throw eight or sixteen measures of a different song into your arrangement, it gets old by the third or fourth time. Find a few songs where this device will really stand out, and stick with it.

Singing is pretty good, with nice vowel unity and blend. I especially liked the backing parts on The Freshmen, which are soft, sweet and never boring. Soloists lean toward mediocre, pleasant but without much oomph. No one really blew me away.

These men could use some better judgment with their song choices. Pairing She's Got A Way with When She Loved Me is a bit too much schmaltz. School of Rock is a poor choice that never quite comes together, and when it switches over into Sweet Child of Mine it sounds just plain bad. I applaud the effort of including an original, but the title track of Before You Go just goes on and on, never going anywhere. Finally, the album ends with some taped studio antics, which is annoying to listen to.

The weakest thing about Before You Go is the production. Almost every part sounds washed out and thin. There isn't a single ounce of raw energy, even in soloists. Some of the mixing choices make the block sound muddy. Finally, I found the percussion a bit off-putting, sometimes not matching the style of the song, sometimes too busy, and sometimes too sparse. I have a feeling the men of Ithacappella have some pipes, but it doesn't come through the dulling production.

What's true in business is also true in a cappella: little risk and little reward. Ithacappella seems like it has the talent and chops to break out of the average mold, but made conventional choices that don't stand out. Getting great arrangements is half the battle. I would like to see Ithacappella capitalize on this strength more in the future.