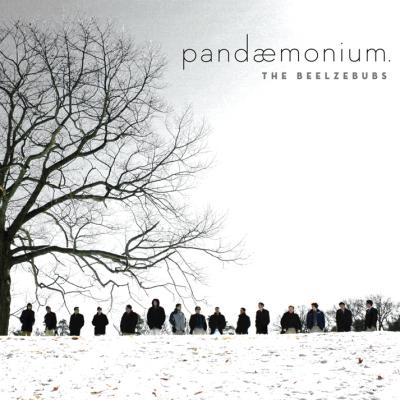 Pandæmonium raises quite a ruckus, mostly in a good way. Bubs fans and general-purpose listeners will appreciate the strong solos, upbeat top 40 repertoire and generally flaw-free performance and production. But for the a cappella connoisseur, the real action on this album is in the instrumental bits.

I know, I know. You're thinking, I already own too many a cappella records, and the vocal guitar solos are always the liability, not the strength. And now I should buy one because they do "neer neer neer" better than anyone?

Well, yes. If you already own too many a cappella albums, you're looking for something new, something you haven't heard yet. For me, that's this disc's straight up, irony-free approach to mouth-made instruments. The Bubs apparently aren't afraid they'll get caught going "neer neer neer" and look like goofballs. Instead, they leave plenty of real voice in the mix. Now, you may admire the fancy production or you may not. You may marvel at the uncut, audacious glory of the full-length synth solo in Come Sail Away, or you may think it's dated and self-indulgent, just like it would be in any modern day cover band. You will certainly not think "oh what a natural album, I bet they sound just like that live." But — and this is big — at no point in Pandæmonium will you say "hey, is that a real guitar? Is that a real keyboard?"

That takes guts. I guess it makes sense in the continuum of the Beelzebubs — their production was just getting colder and colder for a decade or so, and they've taken more than their share of crap for it from the a cappella overdose set. If you measure the world in terms of Styx songs (and admit it or not, there are a lot of you out there), the comparison point is Mr. Roboto on 2003's Code Red, where the "vocal" in vocal synthesizer was just a labor intensive formality. Fast-forward to Come Sail Away, and those long hours in the studio have let a lot more singing texture shine through. So maybe Pandæmonium is the Beelzebubs's way of saying, you want voices? Here are some voices. Neer, neer, neeeeer. Doo, ahh, GOW!

Ok, so that's a lot of baggage to lay on a rotating bunch of college kids. A group like this has enough resources to give its current incarnation a wide range of choices, and this bunch was savvy enough to follow through. It's quite possible they just made the album they felt like at the time.

There's a fair amount of range on this disc. The songs here cover quite a range of moods and tempos. Still, they're generally upbeat, well-handled and eager to please. I liked the song I expected to like — Digging In The Dirt, I'm a sucker for Peter Gabriel — and the album opener Magical Mystery Tour was appropriately psychedelic and engaging. But my favorite cut was New Age Girl, which on general principle I find dumb and overdone. The Beelzebubs make it just so bouncy! So much fun! Goofy guitar solo and all.

Find a good set of speakers and play Pandæmonium loud. Turn down the volume and listen again and again. Like most 'Bubs albums, Pandæmonium evolves with repeated listens. Code Red and Shedding were masterpieces of voicing, with dead ringers of challenging instrumentals and songs expressed in new ways through weird, special little sounds like trumpety quacking or aggro vocal cord clenching. Pandæmonium blasts off with soaring soloists and huge, open chords. The album innovates the giant block by defining "ah", but soon reveals itself to be more, unveiling subtle nuance underneath.

You will most remember the album's arena rock and rock ballad songs because they feature giant, ringing, glorious chords of shimmering thirds, fifths, and dissonances sung on one spectacularly blended and iconic "ah". These heroic musical moments are dreams fulfilled for big guy groups. You can almost see all 128 digital Beelzebubs planting their feet, squaring their shoulders, arms jammed at their sides, lungs reaching endlessly down to their guts and swelling, shuddering in anticipation, then unleashing the biggest, most room-filling chord you've ever heard. You wish it would stretch to infinity and, for a moment, it does — until it's over and you're left deflated and gasping for air, since you were singing along at the top of your voice and in octaves you haven't been able to reach since childhood.

Surely the group planned this assault on a cappella's greatest known "ah" chords, choosing its track list to showcase their newfound weaponry. Magical Mystery Tour is jampacked start-to-finish with shimmering "run uhhhp"s, "take you awayyy"s, and "ahhh"s, under the Beatles's soli melody. Sliding "ah"s in each chorus of City Of Blinding Lights foreshadow the arena rock bridge. The soloist's line "time, Time, Time!, TIME!" cues wailing tenors to raise a blended "ah" and "oh" chord. The tenors backing the soloist in the chorus of When I Get You Alone are just laying out a sliding "oh", delivering the payload from a few miles away.

Ruby Falls is a rock ballad, cathartic in its contrast of wide, minor chords and a contemplative, dreamlike ending. The song's big "ah"s swell and sink, serving the mood of the melody and lyrics, until the bridge when the "ah"s bulge upward to take over the song, building power until they command the soloist to wrench out a heartfelt "Love, don't look me in the eye!".

The album closer is another charismatic, charming Styx performance. Come Sail Away is the album's parting shot, building slowly for two and a half minutes before unleashing its first "ah". The last thirty seconds are the hugest "ah" chord on record, gratuitously yet infectiously slathering on two more layers before closing.

But Pandæmonium is no one-trick pony. Lurking beneath, shaded from blinding chordal armageddon, are delightful moments and tickling surprises. The ‘Bubs don't clobber listeners over the head with their cleverness, instead planting treasures for future discovery should listeners choose to put one ear to the ground.

And the album has non-"ah" songs. Linger rises and falls beautifully. The soloist's tone is dreamy and his voice smooth, with exceptionally pure vowel sounds. His phrasing is gorgeous and engaging, passing between a languid delivery and a lively nimbleness. The ‘Bubs liven the song's repetitive sections with a panning "nur" and "gang guh dang/ding guh ding"s that break up the "oh"s and "ah"s.

Digging In The Dirt is a world class mix of an inspired arrangement, the most dynamic on the album. The intro is funky, with a great backbeat "boo boo boo buh boop" tenor line set against a syncopated "bomb bomb bomb" bass groove. The soloist begins dry and breathy, suitably sinister in the verses, predatory in the choruses. The bass "hoom" feels elemental, sung from the gut and the dank depths of Peter Gabriel's id. Subtle background noise floats throughout the song.

Compared to Code Red, Pandæmonium may feel a little soft and downplayed to some listeners. Pandæmonium is less aggressive, filled more with love than angst. Pandæmonium takes more commitment to appreciate its greatness, but the album is full of reward.

Pandæmonium is an incredible a cappella album. The Beelzebubs's vocal talent, studio execution, and their attention to detail add up to a radio-ready, consumer-friendly product.

Much of the credit goes to Ed Boyer, whose arrangements and direction have clearly defined the Bubs's sound in recent years, and to Bill Hare, whose production is brilliant from start to finish. Boyer is a master of his craft. Always thoroughly tasteful and moving, with dense textures and clever transitions, his arrangements stand out from the rest.

I appreciated the thought that went into the construction of the album, beginning with the ensemble number, Magical Mystery Tour, and ending with a tasteful musical allusion to the same, nestled into the coda of Come Sail Away. The body of the album flows nicely, a nice mix of semi-familiar-but-rarely-covered songs as well as some more obscure songs. Upon first listen, it took me a few songs before I could really get into the music, but the Bubs pick up steam as they go along. The dynamics, the execution — everything improves.

I'm hard to impress with ballads, but I think that Linger is the album's strongest arrangement. I sometimes fail to recognize the amount of effort and innovation that goes into making a cover of a mediocre song enjoyable. City Of Blinding Lights captures the U2 vibe admirably, an achievement in a cappella that only the Bubs can claim. Digging In The Dirt is the strongest song on the album, and I often catch myself unconsciously geeking out and singing different voice parts from the arrangement.

Great moments erupt, arrive, and emerge throughout the album. The chorus of Livin' On The Edge, the prechorus of Digging, the bridge of Linger. The basses also get their turn with great choruses in Livin' and Diggin' and some freaky sub-human notes in Smiley Faces. Andrew Savini's voice induces virulent jealous rage twelve or thirteen times throughout the album.

Some of the falsetto execution in the high tenors is weak, and tuning/editing artifacts abound, especially in Mama, I'm Coming Home, Ruby Falls, and in Come Sail Away, the intro of which comes across too comical for my taste. The vocal percussion verges on average, an adjective from which the Bubs must surely recoil. The sound palate is too limited and inhuman for my taste. Lacking are the innovative, organic, rhythmic devices being employed these days by some other top-tier groups like the Cornell Chordials. It's all very tasteful, but not very impressive.

New Age Girl doesn't quite cut it as the cheeky, fun number, but the Bubs make it obvious that they still have what it takes with their hyperbolic ending of Love It When You Call, which is perfect.

The Bubs must resent the fact that every assessment of their work must be measured against their predecessors, who have always set the bar high. I will keep it simple. Buy it. Pandæmonium stacks up admirably against their recent albums, falling short of Shedding sonically, and of Next creatively, but thoroughly eclipsing Code Red. Nothing on the current album tops The Trial (from Next) in terms of a cappella moxie or execution. Pandæmonium lacks a jaw-dropper like Paranoid Android, a sonic masterpiece like Everybody Wants to Rule the World (both from Shedding), and a transcendent soloist like Greg Binstock, but still represents some of the best scholastic vocal music being made.

Unfair comparisons aside, the Beelzebubs have much to offer their listeners with this latest release, and with talent like Bill Hare and Ed Boyer in their camp, I'm sure we can expect more great recordings in the future. Some originals perhaps, next time around?