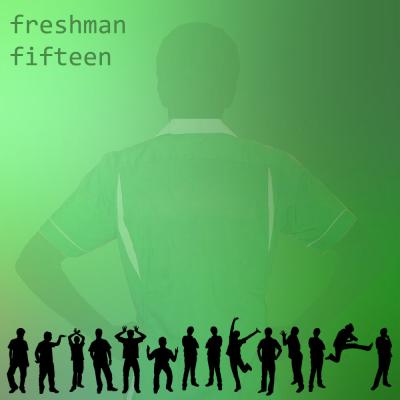 I mention that at the top only because if you're unfamiliar with them or their previous work, it's unlikely you'd be able to determine this fact from the liner notes which, coincidentally, also omit any credit to original artists covered therein.

Of course, this is not a review of the liner notes, cryptic and incomplete as they may be. But there is something similarly missing from the music offered up by Freshman Fifteen on The Green Album. Indeed, there are quite a few pieces of the puzzle missing such that The Green Album left me feeling a bit blue.

Back in 2006, when they released Game Time, the FF touted themselves as having "completely turned their backs on effects" and some of the RARB reviewers lauded them for presenting what was very nearly a "live-sounding" album, albeit a mediocre one. Well, the boys have clearly done an about-face on the effects front, enlisting the talents of Dave Sperandio to mix and produce The Green Album. And while the result is a bright, rich, full sound, the production choices — whether they be the group's or dio's — are one of the album's two major undoings, with the second being the arrangements.

I've said it before and I'll say it again: thumping, sampled VP and thundering bass do not an arrangement make — see: I'll Make a Man Out of You from Disney's Mulan (yes, Mulan). What's more, if you're going the sampled, octavized, processed route, please oh please use it tastefully — see the hyper-active bass drum in Feelin' Good which also features downright awful cymbals. And at the very least, please understand that not every song is suitable for that sort of artistic choice. What works in Makes Me Wonder and Me and My Gang draws way too much attention to itself on The Way it is or retro tracks like Who Loves You and That Thing You Do.

Speaking of drawing attention to oneself, these gents' arrangements often fall victim to two annoying habits. The first is a preference for syllable patterns that stick out like a sore thub — see the "zee-dop-da-diggy-dum" of Chariot or the opening syllable choices in Change the World. Instrument imitation is all nice and good but when overcomplicated syllable choices bring the background to the foreground, the arrangement is undermined. Secondly, the FF arrangements don't really go anywhere. One verse-chorus and you've pretty much heard the song, so to compensate, after two iterations, the guys seem to enjoy an interpolation or extended riff of some kind. It's there in Who Loves You, and again in Get Ready, and then again (via Marc Cohn's Ghost Train) at the end of Change the World, and yet again (via In The House of Stone and Light) at the end of The Way it is. I found myself wishing the guys had found more interesting ways to arrange the material than finding other songs they could switch to when the material ceased being interesting to them.

Solo work is nothing spectacular which perhaps explains why many are mixed squarely in the middle of the mix and not placed further forward. Truth be told, "nothing spectacular" describes most of this album. Their parents, classmates, and friends can be proud, and the peppy and mainstream material might even please the casual fan. But for the aficionados, there's nothing here you haven't heard in better executions elsewhere.

I love these guys! Freshman Fifteen have a certain raucous energy that is infectious. I have a feeling F15 just blows the doors off the auditorium when they perform live. Everything has pop; every rhythm is perfectly in the pocket. You get the idea these young men can wake up after a long night, blow the pitch, and have the same energy every time. This energy and vitality helps bring the entirely group-arranged album to life. They've even got nicknames. All of them. Sure, lots of a cappella groups (especially male groups) have silly nicknames, but these guys refer to themselves almost exclusively by nicknames in the liner notes. Chariot's arranger? Snapz. Soloist on Me and My Gang? Gameboy. VP on the same track? Daddy and Crazy Legz. I have a notion one or two of the boys may be familiar with Neil Strauss' book, The Game. They think they're more important than they probably are, and that confidence is sure to win them fans.

Maroon 5's Makes Me Wonder just leaps off the album, and while the soloist isn't quite there (Maroon 5 solos are extremely hard to pull off), all the other components of the track are excellent. Feelin' Good is soulful and the block really shows their chops by supporting the soloist almost to the point of showing him up. Fifteen is all over the map with style and is found rocking out Rascal Flatts' Me and My Gang on the second to last track. These guys don't look away from a challenge as they've picked some weighty tenor solos to duplicate, and for the most part they pull them off.

Annoyance: Nowhere in the liner notes or CD case is there a listing of original artists. Thankfully, I was already familiar with 95% of the repertoire showcased. The main problem here is that the guys should have had enough class to list the artists who are giving them music to perform. I think they'll fix this on the next album, and I want to believe it was just overlooked in the flurry to get everything together to press the CDs.

I hate these guys! Despite all their energy, some of the arrangements are too punchy and are lacking the connective tissue of the chord to pull it all together. Take Chariot for example, a moderate tempo song that relies too heavily on the rhythmic portion of the recording and ignores the soaring lines which would really provide the ying to Fifteen's yang. With fifteen voices, this issue is easily fixed. Syllable choice is also clunky in places. In the same song the opening goes something like "za got digga zigga dem", which just sounds forced and unnatural for the guys to spit out. "Deh deh sche dem dem" in Get Ready brings light to the same problem. I'm all for weird, zany syllable choice when it reflects the song's style and sounds natural coming out of the singers' mouths. Fifteen is not far off, but it still comes out awkward throughout. The best advice I can pass along comes from Anna Callahan's Collegiate A Cappella Arranging Manual, which encourages the arranger to sing along with the recording and utilize a free association method of letting whatever comes to mind come out of your mouth. Usually, it doesn't take more than a couple passes to discover a progression of syllables which suits the song, your singers, and the arrangement in general. If it ends up being "doo doo dah", don't try and reinvent the wheel. Of course there's always a place for "zoo diggity bey wah". You'll know when it's time to get crazy if you employ this method.

In the end, I love Freshman Fifteen much more than I hate them. Mainly due to the fact that they are taking chances on this recording and in their arranging structure in general. Taking chances is scarce in the world of collegiate a cappella and maybe this group of guys doesn't know they are supposed to rehash what every other group is doing. Finally, I hear some good, solid choral training (maybe a glee club?) in the voices of Fifteen and I'd like to see them exploit this background a bit more in their next release. Freshman Fifteen is on the right track, and if they keep letting their joy come through their recordings they'll create fans far and wide. If you like men's groups, you will probably find Freshman Fifteen a worthy purchase.

You only need to listen to the first six seconds of The Green Album to get an understanding of Freshman Fifteen. To most people, a cheesy introductory tag is a throw away gimmick, but I believe the first track makes a powerful statement about the group's identity: they're fun, they understand and appreciate the innate goofiness of collegiate a cappella, and they certainly don't take the medium too seriously (which is a good thing, in my opinion).

This is a great framework upon which to build the rest of the album, and happily, the energy and enthusiasm foreshadowed in the first track is present the whole way through. For the most part, there's also decent tuning, interesting arrangements, and fun song selections. Zoot Suit Riot? Great choice, especially for a charismatic group like Freshman Fifteen. It really allows the singers to have fun and be rowdy, and that excitement transfers over to the listener. And I'll be honest — choosing a moderately obscure Disney song like I'll Make a Man Out of You is the easiest way to win me over. I probably gave this a higher rating than most people would, but come on! It's Mulan!

The guys have a pretty amusing sense of humor. Consider the grand finale, Mmmbop, which is a head-scratcher of a song choice. They really seem to sing it with sincerity and gusto for most of the track, but then it breaks down towards the end and transitions to a full, four-part "I love Hanson!" that verifies that they understand the ridiculousness that ensued during the past three minutes. The group also does a great all-around job of establishing their "brand" through the music and on the CD artwork, from the consistent color scheme to the quirky code names of the singers. This is what Freshman Fifteen is all about, and you'll probably have a good time listening to them.

My biggest gripe with the album is that production that is supposed to enhance the sound actually takes away from it. Like many a cappella albums before it, The Green Album takes advantage of many post-production features. That's great, and if used correctly, these effects will really add to the end result. But in this case, the compression is a bit too aggressive, which results in a generally loud dynamic that tires my ears after a few tracks. This group probably employs great dynamic work on these tracks, but the listener loses this when the range of the audio signal is limited. So songs like Feelin' Good, where the dynamics are critical to the execution, are much less engaging than they could (and should) have been.

The percussion sampling is also problematic on The Green Album. Singing to a percussion grid sometimes eliminates the natural ebb and flow of live singing and can make it sound frustratingly mechanical. This is then complicated by the fact that Freshman Fifteen is so excited and energetic about the music that they often stray from the tempo, and the result is an awkward struggle to stay in line with the percussion. This issue is most apparent in Mmmbop, but it's present throughout the entirety of the album.

There's nothing stellar or groundbreaking about The Green Album, but I like Freshman Fifteen all the same. Their charm and enthusiasm make the album good for a casual listen. My guess is that they're a blast to see live, so if you're in the Chicago area, I'd suggest looking them up and supporting one of their shows.

This album is available through iTunes and the group's website.