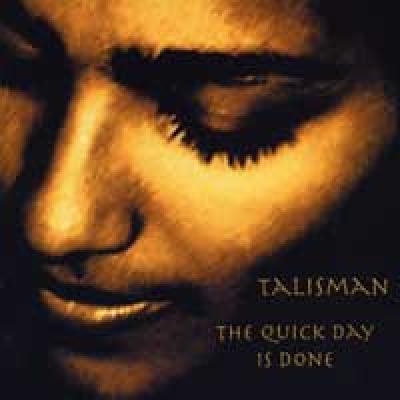 It's been eight years since I've had the pleasure of reviewing Talisman's 10th anniversary album Shine, and I'm so delighted to find that very little has changed. Their repertoire continues to be the most unique and meaningful I've encountered on the collegiate scene — indeed, even in the professional ranks, their material would put them in a very small group that might also include Sweet Honey In The Rock, Zap Mama, and Ladysmith Black Mambazo. Furthermore, the passion with which they perform the music is palpable, the ensemble singing is inspiring, and the mastery of a multitude of foreign (and in some cases nearly extinct) languages is impressive to say the least.

If that still sounds like qualified praise, it is.

As a study in ethnomusicology, Talisman as a group, and The Quick Day is Done as an album, may just be about the best you will find on the collegiate level. Groups like Penn Masala tackle unique repertoire as well but you'd be hard-pressed to find another group whose set list is as diverse as Talisman's is here. Similarly, as a demonstration of what might be called "a cappella activism", you're not likely to find many better examples than Talisman, if any at all.

But as an a cappella album, I can't say that this album is the most compelling of listens. It's fascinating to listen to once, especially while perusing the detailed liner notes which provide context and history for each track. And when they sing together chorally, in rich, lush harmonies, they surely make an incredibly joyful noise. And yet, I can't say I'll be listening to any of these tracks again any time soon.

Why then would I re-visit my Neri Per Caso or Basix or Fork albums before revisiting Talisman, even though I have no better understanding of Finnish or Italian than I do of Swahili or Zulu? It's not so much the more "modern" material that the aforementioned pro groups offer. What this album lacks for me is a sophistication of execution that would make the music itself even more interesting. The creative points they get for picking this material are innumerable, but the effect is mitigated a bit when it's interesting music uninterestingly realized.

Now, perhaps it's not an entirely fair criticism as Talisman clearly tries to present much of the music in a style and context that is at least reminiscent of its source material if not downright identical to the way the music may have been originally performed. OK, I hear that. But once they added basslines, and layered in other songs, and employed vocal processing, the door was open to interpretation and adaptation and here is where the album is lacking. Simply put, there is only so much bass line + native drum + homophonic and/or call-and-response background my ear can take. At least on the "newer" material like Soweto Blues (made all the more poignant by Miriam Makeba's recent passing) or Hugh Masekela's Stimela, I was hoping for some inventiveness and was left rather disappointed.

All of that said, this a noble effort from Talisman and though it may just collect dust on your shelf, you will still probably feel good for having listened to it — even if only once.

I can think of little but words of praise for Talisman on their latest release The Quick Day is Done. This is collegiate a cappella like you've never heard, unless of course you've heard this group already. A quick look through past reviews shows Talisman to be consistently excellent and, perhaps more importantly, constantly working to expand their craft. Multicultural music may not be your cup of tea, but if you like a cappella you would be hard pressed to deny that Talisman sings with excellence and artistry miles ahead of most of their peers.

At the core of why I enjoyed this album so much is a simple fact: it has a message. Moreover, it's a powerful one. The liner notes say that with this album "Talisman meditates on the passing of the day into night, of life into death, seeking that rich calm which can only be found in twilight." While many college groups struggle to put out an album that is musically sound, Talisman gives us a collection of music that is all that as well as a thought-provoking look at the human condition. To be able to do so is the gift of a great storyteller, and the privilege of a top-notch ensemble.

The mechanics on this album are pretty awesome, to the point where I could imagine Talisman being mistaken for a professional group. In fact, only the tone color of the group reveals that they are collegiate. They sound a little young at times, but young like the professional vocalists of tomorrow I have no doubt they will become. Give some of these voices three to five years and they will fit right in with any renowned international vocal ensemble. There are a few moments of less than stellar blend, but they are almost always appropriate in the style being sung. Tuning is practically faultless. Soloists are exceptional, with the women being just a bit more exceptional than the men. They're given more face time so it works out well. With respect to the backgrounds I will say that the women, especially the low altos, occasionally threaten to overwhelm the tenor voices. That may be something to keep an ear out for next time around.

It's extremely rare for me to be moved by an a cappella album, especially one from a college-level group. While I recognize that Talisman's world music aesthetic may not be for everyone, I would encourage fans of all things vocal to give them a try. This group has a story to tell, and I think you will find yourself rewarded for listening.

Not every collegiate group can boast the fact that one of its songs is featured in a video game. Then again, not every group is Talisman of Stanford University, which becomes quite clear after a listen through their latest release, The Quick Day is Done.

Talisman differentiates itself from other collegiate a cappella groups in many ways. The most obvious is that its repertoire is "rooted in the musical traditions of the African Diaspora", which means no Fix You or Hide and Seek to look forward to. But it also breaks free from the rest with a foundation of stellar musicality that few college-level groups can match. Talisman is quite clearly made up of very talented musicians, because the final product's success is truly a group effort.

What makes the music on this album so strong is the fact that it leaves very little, if anything, to be desired. Every fundamental musical discipline is addressed and effectively executed. Dynamics are passionate and appropriate. Phrases are well shaped and drive even the simplest rhythmic patterns. Enunciation is immaculate (particularly on Belgo Zairoise). And soloists — well, they'll leave you wondering how so much talent can exist on one college campus.

But this album's winning element is the group's mind-blowing enthusiasm. There is such tangible passion within every note of every song, to the point that even in the absence of English lyrics, the music tells a story, and the listener understands. The solo on Sombawo and the narrative on Stimela, in particular, command attention with truly heartfelt deliveries. And the group sound is just as enthusiastic as the solo voices, both about the text and the music itself. Sometimes, the emotion gets the best of the singers, and sections start to get a little shouty (especially among the sopranos), but honestly, I'm really reaching to find "opportunities for improvement".

Talisman has set the bar high. The group's performance demonstrates immense maturity and musical discipline. It doesn't matter whether or not you listen to African spirituals/folksongs — this album will bowl you over and leave you wanting more.

To order this album, visit the group's website, Primarily A Cappella, CD Baby, or Amazon; email the group; or write to: