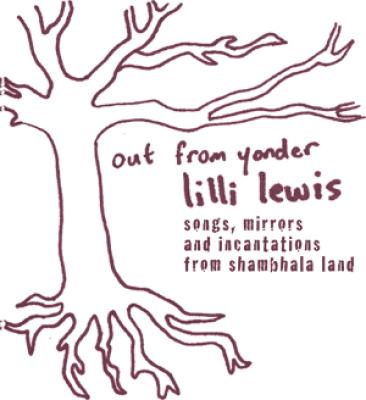 It is not often that an a cappella reviewer gets to bear witness to the burgeoning talent of a neophyte to the genre. Such has been my experience and privilege listening to the latest recording by soul/folk/classical artist Lilli Lewis. We have to add her name to the growing coterie of musicians who are making an impact on our community as solo artists. Like Imogen Heap, Petra Haden, Scott Leonard, and Kid Beyond, Lewis has brought a refreshing voice to the scene with her debut a cappella recording, and fourth recording overall, Out from Yonder: Songs, Mirrors and Incantations from Shambhala Land.

Lewis is a classical pianist who has been releasing albums since 2003. Out from Yonder is a cycle of music using aspects of sacred song traditions from around the globe. So not all of the tracks seem like fully considered songs in the Western tradition. She's created melodies, motifs and soundscapes using American spirituals, Hindu mantras and Tuvan throat singing as foundations on which her creative expression blossoms. One song incantation: libation does use drums and other percussive instruments (if such matters to you, be forewarned).

My favorite songs are warm like the waters, a new name and sanguine song, with each representing a different musical style with the utmost aplomb. warm like the waters has an infectious groove that grows into a bubbly pop tune that washes over the listener. Lewis' arranging skills are very elemental — especially for someone just now steeping herself into the field. The sonic waves crash into you like you are lounging at the beach. And the crest breaks on the line "it's only a matter of time". Just fantastic. a new name is a gospel shout-out reminiscent of the earlier work of Sweet Honey In The Rock. It is steeped in the spiritual tradition and is reflective of the easy to deliver and moving chord structures of a Sunday afternoon service. sanguine song is a sassy R&B-laced diva blues number. It is the song that Sascha Fierce wishes she could have created. The first line is, "You're plain ugly." Hello. That is a woman in control and about to let you know it.

Listeners probably won't like the incantations as much. As mentioned before, they are more snippets of songs or melodic ideas than full songs, setting the mood thematically for the tracks that follow. And the good afternoon (interlude) number is a bit self-indulgent.

Lewis has an earthy sexiness to her voice like a subdued Meshell Ndegeocello with a bit of Sade Adu's velvetness for extra spice. And it floats effortlessly through the octaves and vocal placements she's created in her arrangements. There is expressiveness in phrasing in her singing that propels the movement of both the spirit and the body, especially during mountain lady woman, a song that I didn't warm up to quickly because of slight tuning issues that lead into the third verse. But now, it reminds me of singing at my grandmother's knee.

I'm all for bringing Lilli out from yonder into the forefront of contemporary a cappella music. Hers is a voice to be heard and exalted.

Lilli Lewis possesses a voice that simply obeys. Dynamic range, style, emotion. Basically, she has such an engaging vocal quality that I could sit and listen to her sing Pink songs all day and be totally enthralled.

Lewis builds her songs from stylish vocal textures, layering complex rhythms and countermelodies over a bass or rhythm line. She sings at her best on sanguine song, mountain lady woman, and warm like the waters, three original pieces with captivating lyrics and melodies. The textures she conjures up for the incantations are interesting, but repetitive and somewhat static, thus less accessible to me. a new name shows off Lewis' range and dynamic control.

The production is exactly as it should be. Very few effects other than tasteful EQ and reverb and delay appear on the album. The emphasis rests solely on Lewis' vocals and lyrics. The tuning is refreshingly natural.

The lyrical content is definitely not instantly digestible, and though I end up skipping some of the incantations on subsequent listens, I find myself listening to a few tracks over and over, peeling back the layers of meaning. Lilli Lewis does what very few singers do, or are even capable of doing: she imparts meaning with vocal quality. Most contemporary singers think about as deeply as, "insert angst here."

Buy this album to remind yourself that singing is awesome.

Lilli Lewis is a unique talent. Her web site includes a wealth of background knowledge on her as an artist, and those interested in discovering more about her should visit the site.

The style of Out from Yonder most closely aligns with the spontaneity of Bobby McFerrin's Circlesongs, the soul of Sweet Honey In The Rock, and the harmonic structure of Zulal.

"Organic" is definitely the word to describe this album. It doesn't say so directly in the liner notes, but one can deduce that all the solos, harmonies, and vocal percussion is performed by Lilli herself. The songs featured on Out from Yonder seem to reflect a spiritual relationship with nature. There are several incantations: wind, creation, earth, flame, and libation, which seems to support the nature notion and connect the album somewhat.

As a soloist, Lilli Lewis is phenomenal. Lush, full-bodied, and free. However, the harmonic and overall structure of the songs leaves a bit to be desired from my perspective. They are extremely repetitive without really adding anything interesting to hold the listener's attention from start to finish. I can see where Out from Yonder would be good to listen to while meditating, and it certainly gives off positive vibes and a relaxed sense of well-being. There are moments where the music lifts up from the repetitive drone (e.g., the five minute plus journey through mountain lady woman: more songs like this would be great, always progressing and going somewhere musically).

Out from Yonder feels long on the shorter tracks and short on the longer tracks. I believe if Lilli Lewis wants to attract more casual fans, she'll want to rethink how each song progresses from beginning to end without losing its musical integrity in order to prevent her listeners from heading to bed early. And yet, just like two people of different backgrounds looking at the same painting: art is in the eyes of the beholder.

To order this CD visit CDBaby; songs may be purchased on iTunes.