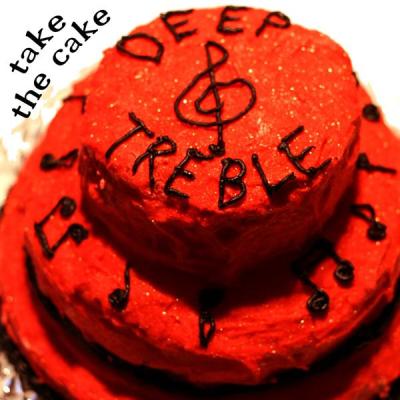 Take The Cake by Rutgers Deep Treble is a thoroughly average a cappella album. In a sense, this is a compliment. The standard for average has risen over the years. It was once a feat for a college group to put out an album in the first place, let alone a good one. Now that basic recording software and equipment are relatively cheap, groups can spend the time to make sure their album is as good as it can be.

What this means is that the average album is all covers, has few if any pitch or rhythm issues, decent arrangements and soloists, and enough production to gloss over weaknesses. Fans would not feel cheated by plunking down $12 for it.

Take The Cake fits within this canon. The arrangements are straightforward and simplistic; they are little more than transcriptions of the originals. The song choices are unsurprising and the soloists sound like alums of a run-of-the-mill high school show choir.

There is nothing on Take The Cake to turn mimicry into artistry.

Deep Treble recently advanced to the finals of the ICCAs, so I am guessing that their live show far exceeds what was captured on Take The Cake. One surprising choice was to leave Yaa Acheampong (who won an award for Outstanding Soloist) without her own track. I would have liked to hear that.

Before receiving Deep Treble's Take the Cake, my only experience with the group was seeing them perform at Lincoln Center in 2007 for the ICCA finals in New York City. I left thinking that this coed group did a lot of things pretty well. Well thought-out choreography and movement, decent soloists, pretty good arranging, and a general hum of enough energy to get them from song to song without drawing attention to any lack of intensity. Here in 2008 with Take the Cake, Deep Treble has maintained that level of "Hey, that's pretty good, looking forward to the next performance."

The group does many things at an above-average level, but it needs to develop its own sound. I feel like they're a cut-and-paste semblance of every other talented, full-of-potential collegiate group out there.

A few observations that may allow them to rise to the top:

1. Roll To Me- Bring the soloist to the fore-front of this track, letting him do his best impersonation of Del Amitri. There are a lot of bahs, dms, and jms here on homophonic chords, but there are some moments where it changes. Bring those changes to the listener's ears in these moments. This is mostly a production fix but group dynamics will help.

2. Ain't No Sunshine- the soloist doesn't have enough bite to keep me interested. It's a tough balance between smooth R&B and a sound that grabs the listener by the shirt collar, but it needs more of the latter.

3. This Is How It Goes- The arrangement is fairly status quo. It's a good thing Jessica Totaro knows how to deliver a solo. The block could do a better job of building intensity in the pre-chorus by utilizing some of the natural dynamics the song calls for (mp-mf-f) through the 4-8 bar change from verse to chorus.

4. Love You Madly- Emma Waldron's arrangement here is the best on the album, allowing the singers to naturally emulate the mood of the song with little effort. Taller vowels in sections that should be louder and closed vowels in the verses provide a framework for the soloist and the group to feel the song from beginning to end.

5.Killing Me Softly- I really enjoyed the simplicity of the arrangement at the opening, but feel the song could have really opened up a lot more towards the end. The group seems too reserved; they should have held zero reservations about covering Totaro up on lead.

6. Come On Eileen- While I nod in agreement to the nod to have the female lead, this track lacks the jubilant quality of the 80s cheese it represents. The arrangement needs to be re-thought on this one.

7. How To Save A Life- *yawn* Okay, we're still listening to The Fray? Hmmm. Tempo: don't take an already boring song slower than the original tempo. Arrangement: Find a way (any way you can) to build the song to a climax that will engage the listener. Think bigger. Think different than what the song might call for! Take a chance!

8. Mad World- Eggshells. The soloist and block are all responsible for the feeling on this track. Again, I was waiting for the arranger to change something to keep my attention but it never happened.

9. Slide- While I very much enjoyed Totaro's VP throughout the album, the kick drum is way too much to the side of R&B with a loose, buzzing kick instead of a tighter rock sound the Goo Goo Dolls call for. It's a minor nit-pick on one of the better tracks on the album.

10. Rhythm Nation- The arrangement really gets moving on this track, but the style seems to be out of the reach of Deep Treble's block singers, coming off a bit too square. Close, but not quite there.

11. When I Get You Alone- Ditto on this track in regards to style. Russell Kohlmann does all he can to carry the song home, but the ambivalence of the block makes me think "when's intermission?"

The only performance that really stands out throughout the disc is Jessica Totaro's vocal percussion, who spits with a "hey, girls can do this too!" attitude on nine of the eleven tracks. She gets such a deeply resonant kick drum sound that most guys should just give up and head for the tenor section. To top it off, when she's not percussing she's delivering some of the better solos on the album (This Is How It Goes and Killing Me Softly).

Deep Treble is good, but not yet great. The little things in musicality and style, more consistent and imaginative arranging that surprises the listener, and a music director that will take no prisoners is what they need to rise above.

So, I'll leave this review with "hey, that's pretty good, looking forward to the next album."

Deep Treble's Take The Cake features some enjoyable tunes, but left me with a marked feeling of "What if"? More specifically: "What if the album had had better sound production"? I have the sense that it could have been something special. Instead it becomes another tick mark in the "missed opportunity" column.

Let me jump right into the production issue. I've heard other groups' a cappella covers of five of the eleven tracks on this album. Without exception, I feel that the versions offered by Deep Treble are inferior to earlier concepts. In one case (Ain't No Sunshine), Deep Treble's version made me immediately downgrade a tentative "5" to a "4" when it became obvious that it has substantially inferior sound quality to earlier recordings. In general, the production choices throughout the album make the songs sound raspy, harsh, and thin. There are no tracks at all that feature a rich, full-bodied sound.

Aside from that, Take The Cake has some good qualities. As already mentioned, the songs are enjoyable to listen to, even if many of the song choices are not terribly original. Many of the arrangements are fairly ordinary, but one that stood out was the arrangement of Slide. The fast background vocals and non-sampled vocal percussion helped capture the sense of the Goo Goo Dolls' original while providing a genuine a cappella feel. With a fuller sound, I suspect that nearly all of the track I rated 3s would have been 4s, and nearly all of the 4s would have been 5s — making this a very good album, indeed.

There were no major intonation issues, but some of the soloists could have performed slightly better. Specifically, the soloists in Killing Me Softly, Come On Eileen, and When I Get You Alone all went flat in a few places. None of the solos really "popped", but all of the soloists were adequate. (Queue Phil Hartman's Newsradio "adequacity" monologue.)

Profanity advisory: When I Get You Alone, a song from Robin Thicke based in part on a disco version of Beethoven's 5th symphony, contains the "s-word".

In summary, I sure hope the group looks into what went wrong with their sound production, because it was clear to me that this could have been a terrific album. Instead, I'm afraid it's only average.