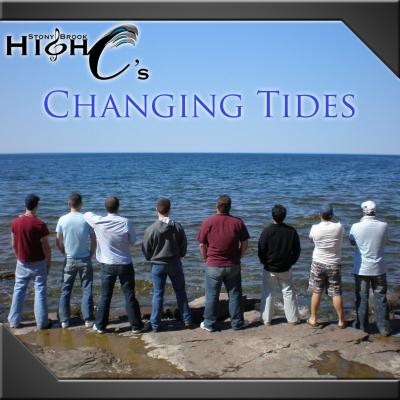 The Stony Brook High C's are kicking it old school. With Changing Tides, they eschew heavy production for naked voices. The percussion isn't looped, and with the exception of a few guitar effects, the sound is mostly unprocessed.

Unfortunately, the results are simply average. The voices often sound young and untrained. Soloists at times struggle to maintain control and can waver on pitch. In contrast, the backgrounds are fairly strong, suggesting synergism when these guys have one another as support on each part.

The High C's rely heavily on a cappella cover favorites like In the Still of the Night, Livin' on a Prayer, and Steal My Kisses, but add nothing new or interesting to their arrangements.

In fact, it seems to me that they recognize that they are putting out a yearbook album. Their use of "Arranged/Transcribed" in the track listing may just be semantics, but I appreciate their apparent recognition of the fact that their arrangements are little more than straightforward transcriptions.

The High C's' choice of songs that have been done/overdone by college groups for over a decade shows either a total lack of knowledge of what is going on in the collegiate a cappella world, or a total lack of desire to truly change any tides.

In any case, these are songs these guys like to sing, songs their audiences like to watch, and songs any RARB reviewer has heard dozens of times — some with iconic versions that have yet to be touched (i.e., The Virginia Gentlemen's BOCA-featured Insomniac).

Changing Tides won't win any CARAs or appear on BOCA or SING or Voices Only or whatever other compilation albums are out there these days, but it will be a satisfying purchase to anyone with a more personal connection to the High C's.

The Stony Brook High C's have made what could be considered a fairly decent album. Changing Tides is nothing outstanding, but nothing altogether horrible, either. A sort of non-descript guy's group singing a hodgepodge of male collegiate a cappella standards. It is an album of a little bit of fun, average soloist ability, and a lot of forehead slapping.

Truthfully, the album sounds like a demo for a karaoke service that unfortunately left the lead vocal click tracks turned up too high on the recording. You know what I'm talking about — lead vocals that are just a hint of what the solo is supposed to sound like.

The tracklist echoes that karaoke sentiment: Livin' on a Prayer, Steal My Kisses, Wherever You Will Go, If I Ever Fall in Love Again, and Insomniac are stalwarts of the buck-a-track set.

Oh wait, not really Insomniac, that's just a Virginia Gentlemen's song that I wish wasn't being recorded anymore. At least they didn't try to pass their version off as an original arrangement as several groups have done in the past.

The backing vocals are solid, sometimes interesting and engaging, just like you'd hear in your favorite bar. Anyone can sing over the top of a background and have a pretty awesome night of fun. And the guys of the High C's are having a lot of fun; they just aren't all that great as soloists. You definitely know what I'm talking about here.

Most of the fundamentals of singing and recording are acknowledged. There is a warm and soothing sound on most of the tracks — a sound that could be described as "pleasing". The production techniques veer towards the "natural is better" mantra, leaving the pure voice in the forefront. Such a choice works for these guys. There are no egregious tuning or intonation problems. The percussion palette is unobtrusive, but pretty in the pocket. There are even moments of strong, dynamic musicality with excellent use of unison breathing and phrase making.

The album falters to the mediocre in the second half. There is no risk-taking on the first ten songs as evidenced by the word "transcribed" by each of the arrangers' names. The song that is the most challenging, Irish Blessing, loses the essence of the melody. Congratulations to the SUNY Potsdam Pointercounts for coming up with an interesting take on a very lovely song.

What confuses me is the assignment of "transcribed arrangements" to two songs that the members of the group themselves didn't transcribe. There is a Duke University connection in general and to The Pitchforks in particular as two of the tracks (Steal My Kisses and Bright Lights) are by alumni Seth Weitberg and RARB reviewer Joseph Bates respectively. Weitberg '03 arranged and recorded Steal My Kisses for the '02 album Bad For the Piano. Bates arranged Bright Lights for their '04 album Honestly. Neither is credited in the same way that the ubiquitous Insomniac is, which is a shame since Steal My Kisses is one of the strongest tracks on Changing Tides, and other people may want to track down Seth and get some of his other arrangements.

I know that there is an aquatic theme to the group's name and the name of the album, but the artwork leads me to think about water being recycled into the sea. Unlike the sirens of old, most casual a cappellaheads aren't going to be drawn to sail on this voyage.

The Stony Brook High C's are an average men's group I wouldn't mind running into on campus while they're performing a short set for the hometown faithful. They don't seem to take themselves too seriously, which makes listening to their album both enjoyable and painful. This album is only a purchase for friends and family.

I can see myself being charmed into pulling a ten spot out of my wallet for this album back in high school or my early college days when my sound quality bar was set much lower. I would have been disappointed though after the ghosts of the High C's live performance had disappeared and left me with only an audio representation of the group, which is far less impressive than the whole package.

The High C's have a very young, unpolished sound that is certainly endearing. This helps them to have an engaged block sound throughout the tracks. The problems arrive in the form of not-quite-there tuning, vowels that aren't all matched across the group, ending consonants that are inconsistent, and a general lack of breath support. And yet, the listener can still gain a good amount of enjoyment from tracks like Steal My Kisses, which ratchets up the intensity in production effects, and the High C's make the most of their "doo dah day, dayum day" groove in the block.

The arrangements are about as simple as they come with a steady influx of "bah bah bah" and "doot doot doot doot", but I hesitate at panning this group for their syllable choices as it seems to give them a decent enough product in the end. It helps that there are moments of occasional brilliance. Sure, they have become one of hundreds of groups to claim Insomniac as their own, but their take on Shai's If I Ever Fall in Love Again is much more than a walk down the same path. Incorporating vocal percussion and some interesting upper and lower harmonies, they put their own stamp on one of the rare a cappella mainstream songs of the last fifteen years. Bass harmony? Weird but works here. They have a pretty good mix of standards and current contemporary hits to keep their friends and their parents interested and that's not something most groups can say nowadays.

And there's the production conversation. Not much to speak of. I don't sense much more than some natural reverb on most of the tracks, and auto-tune didn't seem to make it onto the mixing board. I think production, more than anything, separates the Stony Brook High C's and Changing Tides from other groups and albums. They have obvious talent, but are still rough around the edges. A few tracks here would have approached 5's from me if the production cleaned up some tuning issues and helped to heighten the intensity and excitement this group clearly already has within.

In the end, I'm rooting for the Stony Brook High C's to continue on and make a better album the next time around. You'll want to take a pass on Changing Tides, but next time will be a different story if they put their sound in the hands of an experienced producer.