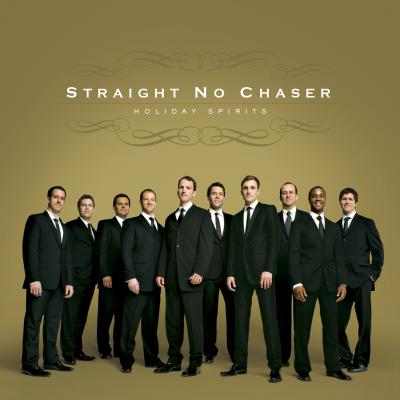 I have been a fan of Straight No Chaser since the beginning.

About their next 1998 release Live at Alumni Hall — what they then labeled their final performance — , I wrote (review published in 2000), "… you read the part that says "final performance". Then you cry "Why, Lord Why!" … Deep bass. Soulful leads. Funny comedy. Killer timing. Enough variety to entertain, but enough consistency so that you always get the group you came for… If I were a record company, I'd sign ‘em."

In 1998 the members graduated and went their separate ways. They started families and got jobs. They grew up.

But ten years later, their comic performance of The 12 Days of Christmas, would receive 7 million hits on YouTube. And SNC would, in turn, receive a record contract from ATCO/Atlantic Records' chairman, Craig Kallman.

Yes, one member wasn't invited; one member had to say no. But younger SNC alum filled their spots and soon enough, the ten-person, all male, reconstituted collegiate group, Straight No Chaser was reborn as a major label act and Holiday Spirits was on its way.

SNC of old was irreverent, ironic, funny, edgy, talented, heartwarming, rehearsed and yet overflowing with raw, infectious energy. Now that they're in the Big Leagues, things have changed.

The new SNC is an excellent men's glee club. Their sound is pure. The crooning leads are sweet storytellers and they spice things up from time to time with a little R&B lick (usually when Jerome Collins takes lead). The backgrounds are sung impeccably, with dynamics and precision. But old fans may have trouble recognizing this new SNC.

True, the original live recording of 12 Days made the album, so you also have that great bit of comedy from the old days, but that's not what the new SNC is about. That track is an anomaly. Today's SNC sounds more like top-notch session singers for a corporate industrial than the collegiate vocal band they once were.

Producer Steve Lunt (Britney Spears, ‘N Sync) gets the credit for the new sound. And he may know just what he's doing. Kenny G is probably one of the best-selling sax players of all time. Josh Groban's Noel was reportedly the top selling album of 2007. Perhaps the audience that buys CDs (instead of, say, ripping them) likes their music as soft and easy as possible. Under Lunt, the new SNC is soft indeed.

In all honesty, it seems hard to believe that the fun-loving, testosterone-filled SNC of 1998 would have liked their 2008 release very much.

It's as if all the advances in a cappella of the last 30 years were ignored. No VP. No enhanced bass. No creative syllables. No noticeable effects. Nothing even vaguely instrumental. Nothing new is rockin' or aggressive or funny or unexpected. Now it's all about smooth singing.

Did SNC spend ten years going back in time 30 years?

This material would be wholesome and family-friendly even in the most rigid, small-town, bible-belt corner of the most perfectly conservative "Leave It To Beaver" 1950s Americana moment that never really even existed. This cd is what the non-dancing parents in "Footloose" might have listened to.

Despite it being unflaggingly mellow, there is still much to praise here. Kudos to Dan Ponce for penning the sweet and tuneful Christmas Wish and Indiana Christmas. These originals make nice additions to the standard Christmas repertoire. Kudos also to Walter Chase for the simple but catchy arrangement of Auld Lang Syne which sounds pleasantly inspired by Billy Joel's In the Middle of the Night.

Of course, 12 Days continues to be a masterpiece of arranging (thanks largely to septuagenarian Richard Gregory's 1950's arrangement) and perfect comic delivery (thanks to the 1998 SNC). But it stands out as not really belonging with the rest of the material.

These guys sound like angels from start to finish. I hope Holiday Spirits goes multi-platinum. I hope to hear these tracks in every elevator and in every dentist's office the world over. SNC always came across as just the type of guys who deserved that kind of good fortune.

But, selfishly, I hope one day to see more of the SNC I really fell in love with, the SNC playing drinking games, horsing around, making goofy videos, up to no-good in the very best way. Something about their recordings made you feel you were there with them.

On Holiday Spirits every note is right, and for that, the new SNC should be proud.

But with the old SNC, it was never really about the notes. It was always something else, some energy, some kind of bottled road-trip-sorority-house-panty-raid-last-minute-A+-term-paper-miracle-something. And that essence, that ineffable joie de vivre, is buried now. And I can't help but feel that fans will miss it.

Finely tuned they are, but this is as straight as Straight No Chaser has ever sounded.

And a very popular Christmas to you, good sir!

Atlantic Records' — excuse me — Straight No Chaser's Holiday Spirits features a selection of songs that reminds me of the playlists of those 24-hour, Thanksgiving-til-Christmas Day radio stations (This Christmas, Sweet Little Jesus Boy, Baby Please Come Home). These songs are straightforward, a cappella versions of some of Christmas's least-interesting and least-known songs. It's disappointing that Straight No Chaser's legendary charisma didn't survive the production process because the group's trademark energy could have resuscitated even this sorry tracklist. Each song is crystal clear in both its production and intent. Miked up close for clarity yet awash in reverb, Holiday Spirits is just right for America's grocery stores and those who love low-budget Christmas radio.

Technically, Holiday Spirits does what it needs to do; deliver crystal-clear vocals and creamy blend that no rural radio signal could degrade. Straight No Chaser sings admirably. Their soloists are gifted with wonderfully clear and forward voices; no throaty singing here. Many listeners will hang on each soloist's every word since they are framed front and center over backgrounds that offer little of interest.

It's fortunate that Christmas songs have a short annual lifespan because these "oo" and "ah" blocks must get tiresome to sing. The background vocalists match tone and timing nicely, leaving no chord unlocked and no texture unhomogenized. The singers add some texture to This Christmas with a "hov uh" syllable derived from "have a" (merry Christmas). The Christmas Song is a standard muzak arrangement, but the group deviates oh so slightly from "oo" and "doo" with an "oo voo" in the first verse.

After the unison first verse of Hark! The Herald Angels Sing / Angels We Have Heard On High, the song held my attention. The gentle arpeggio transition between the two songs is lovely. The Angels soloist has a smokey, velvety voice and his "gloria" descents are soothing and dreamy. This track treats these songs with the tenderness of a love song and I was pleased to feel a chill settle on my Grinchy shoulders as the two soloists traded melodies over a calm, "doo" arpeggio nearing the end of the song.

The 12 Days of Christmas is a bulky, masculine live recording of the "confused" arrangement of this song. You know, the one where they can't seem to sing the 12 days in order and where other Christmas songs seem so spontaneously injected. It's funny if you haven't heard it before, but even so, when Straight No Chaser launches into Toto and Christmas Down in Africa, it recalls the energy, confidence, and charisma we're used to hearing from SNC.

I suppose it should be unsurprising that this Atlantic Records production has been crafted for mass consumption. Broad appeal is how big media companies make money. For more than a decade, a cappella has been synonymous with quirky, creative interpretations of mainstream songs, so this album's "by the book", pop radio approach left me out in the cold. For those in the know, there isn't much to sink ears into, but with the marketing might of Atlantic Records behind it and Straight No Chaser's sweet-voiced singing, Holiday Spirits will undoubtedly please the masses.

Holiday Spirits is probably exactly what most people look for in a vocal Christmas album. Mixing traditional holiday songs with modern Christmas pop songs, Straight No Chaser delivers a charming product, enjoyable for listeners of all ages.

The emphasis is placed squarely on the singing, as the highly professional yet discreet production allows us to focus on the excellent leads and tasteful arrangements. The bass is warm and strong but not overpowering. The tuning is solid and natural throughout, with only a few instances of real crunchiness in the hook of Indiana Christmas and more notably during the chorus of Baby Please Come Home.

Speaking of Indiana Christmas, this original tune is sure to score points with the hometown Hoosier crowd. It even makes this reformed Hoosier a little nostalgic. I don't care for the other original, Christmas Wish, nearly as much, though it is certainly well sung.

The inclusion of the live track was a little awkward as well. It does not stack up sonically, and the singing lacks the warmth and control and professionalism we grow accustomed to during the first few tracks. The gentlemen of SNC also disregard a great deal of the nuance that makes this classic arrangement so enjoyable, rushing through the scripted interplay as if they're just trying to get to the Africa section.

Minor quibbles aside, I can wholeheartedly recommend this album to anyone who enjoys Christmas music. It possesses all the endearing traits of your favorite college group, but none of the characteristics of amateur singing.

To order this album, visit the group's website or iTunes (including 3 bonus songs).