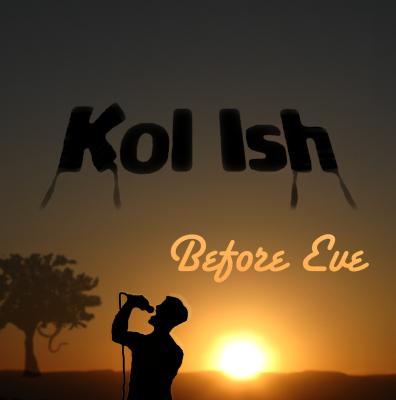 There are two, or perhaps three, contexts in which I can appraise the work of Kol Ish on Before Eve.

First a quick word about their name, which literally translated means "Voice (of) Man" — though they are in fact five young men. It's reasonable to assume that the title is a humorous nod to the concept of "Kol Isha" (literally "Voice (of) Woman"), which describes the prohibition accepted by strictly observant Jews (to varying degrees and with varying exceptions and mitigating circumstances) of listening to the female voice in song. Basically, it's a cute, grin-inducing name for those in the know but I daresay that 1% or less of the RARB readership will likely get the reference so it seems worthy of explaining a bit. Moving on ...

In the context of contemporary collegiate, semi-pro and/or professional a cappella, you can absolutely skip this album. Virtually the entire album is five guys singing pleasantly around in unison with harmonies ranging from pretty basic to slightly complex — not unlike what a group of talented singers would sound like around a campfire (albeit if the campfire had nice microphones in the neighborhood and some basic vocal processing on site). The moments of lead/background vocals using any sort of rhythmic/percussive syllables are few and far between and they are rudimentary at best when they occur.

In the context of contemporary Jewish a cappella, this album is probably also a pass. A good deal of what is being turned out by the major Jewish groups on college campuses (Tufts Shir Appeal, Kaskeset, Tizmoret et al) far surpasses Kol Ish in complexity and entertainment value, not to mention the sort of impressive work that a group like Six13 continues to produce. It isn't solely that Kol Ish favors unison group singing over richer, more detailed and varied arrangements, but even their unison arrangements show very little imagination. A fair amount of the music is original and that's commendable, even if the new compositions aren't very compelling. But more importantly, while there are color chords here and there, thirds and fifths and octaves abound, there is little if any development in each iteration of the song, and songs regularly end abruptly. If this sort of music/singing style floats your boat, you might check out either of the albums by Kol Zimra, where Sean Altman has at least re-imagined and/or re-harmonized what some might consider some of the better-known "classics".

This then leaves the final context, where Kol Ish probably fairs the best (at least in comparison to the prior contexts), which is the religious Jewish a cappella music market. This market includes groups like Six13, but it also includes a number of other groups (some of whom record regularly with instrumental accompaniment) who have specifically created a cappella albums to cater to their listenership for the two times of year when some Jews do not listen to instrumental music (a portion of the "Sefirah" period between Passover and Shavuot; and again between the fast of the 17 Tammuz and 9 Av). Before Eve is quite typical of these albums, which generally features either slow, Jewish oldies (Shlomo Carlbach, Dveykus et al), covers of more recent religious Jewish "pop" hits, and/or original music featuring liturgical lyrics set to melodies with a modern rock/pop ballad sensibility. Here too Kol Ish's lack of originality in the composition and/or arrangement of the material covered is a serious shortcoming. But for the roughly 50 days per year when an observant Jew might break out an album of this sort, Before Eve isn't by any means the worst of its kind, though it's far from the best.

Oh, and by the way, if you recognize the tune of the opening track Mi Adir, it's quite blatantly taken from Coldplay's Till Kingdom Come — a fact which is noted only on the shrink wrap of the CD (likely to be discarded quickly), whereas in the liner notes, the song is "Composed by Michael Gevaryahu". Imitation may be the the sincerest form of flattery, gents, but you might also want to give credit where credit is due.

If you are a Jewish Hebrew-speaker looking for some background music for your dinner party, you should consider Kol Ish's Before Eve. If you aren't, you won't find much to latch onto here.

The young Jewish quintet has put together a respectable album of mostly original, religious-themed songs. These guys have nice voices, and they pull off the straight-tone style very well. But the near-perpetual homophonic writing, the artifact-laden tuning, and the cliched chord movement add up to an uninspiring, forgettable listening experience.

Many of the songs follow a textural formula: syllabic (usually on an open vowel) intro, followed by homophonic religious text for the rest of the song. The often succinct texts and lack of melodic diversity within the songs makes most of the material feel repetitive. Yehi Ch'vod, which closes the album, departs from this formula, but after nine songs with nearly no obvious effects, the sampled percussion, heavy EQ, and aggressive distortion seem out of place.

The album is over-tuned. Even in the songs that were deliberately left partially out of tune, Gam Ki Eilech, Hodo Al Eretz, and Mi Adir, the pitch drift correction is blatant. The album just has a bit of an identity crisis. The goal seems to be to relate religious material with a natural, unaffected sound, but — and this should be obvious for anyone who has heard more than three a cappella albums in the past five years — computerized vocals will subvert a natural sound before the mix engineer even sits down at the console.

Clearly, the group has some compositional skill. What it needs is inspiration. Some of the chord movement on Before Eve is so banal that I feel patronized. I won't say that this album approaches the level of musical abomination found in contemporary Christian music (Meheira comes close), but with so many millennia of beautiful and uniquely Jewish artistic traditions behind them, I expect better music from Kol Ish.

First, however, let me give some compliments. The album is fairly pleasant to listen to. The tuning is pretty good overall, with only a few exceptions. The balance between soloist and background vocals is good nearly everywhere. There were very few "what were they thinking??" moments as I listened to the album.

Now, for some criticisms. The biggest problem with the album in my opinion is the arrangements. None of the arrangements make me say, "Hey, that would be kind of fun to sing." Nearly all of the songs involve a high percentage of straight block chords, with very little background texture to liven things up. The chords and chord progressions they use are also very straightforward, with not a lot of non 1-3-5 notes. There aren't even very many note suspensions. Key changes are also few and far between — I only noticed a single key change as I was listening, although there may have been one or two others that I missed. In short, the arrangements break one of my cardinal rules of performing: "Thou shalt not be uninteresting."

As mentioned above, all of the songs are in Hebrew. That's not my third complaint; rather, my third complaint is that much of the Hebrew sounds Americanized to me, as if the pronunciation isn't fully Hebraic. Take this complaint with a grain of salt, though, since I don't speak Hebrew myself; I'm drawing on some experience singing Hebrew music with instruction in diction from a rabbi. But even if this were an English-language album I would still dislike words ending with "-ar" (for example, in Ha'azinu) that end up sounding like "-arrr" (cue pirate joke); while Kah Ribon and Adon Olam are two other songs where a seemingly Americanized sound detracts from my enjoyment of the album.

In summary, my listening notes from the first song are pretty representative of what the album is like as a whole. Mi Adir: very nicely in tune, sounds good. Very slow. Musically pretty boring. Rinse & repeat. Even if I understood Hebrew, this album would not come close to a "must buy" for me.