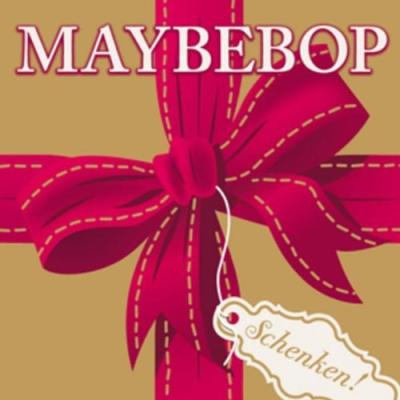 Let's begin at the end. Morgen, Kinder, wird's was geben is a very funny arrangement of a song deconstructed by a faux DJ, scratching and dropping beats. This is followed by 10 minutes of a comedy routine, storytelling which includes both mentions of Jesus and melodies made with fart-like hand (or possibly armpit) noises, game show buzzers and frequent audience participation. Following is a long, comical discussion with various audience members. Based on the audience reactions, this all sounds very entertaining. Still on the same track, I Want to Wish You a Merry Christmas emerges (in English and Spanish). This is followed by a snippet of We Are the World which completely falls apart due to Maybebop laughing too hard to sing. And finally, ewe come to the end of the 15-minute track.

Not speaking German, this is a tough track to rate. But I'll go with the audience and give them a "5". The natural result of a fantastic album leading up to this point is that it's impossible not to give Maybebop the benefit of the doubt.

This quartet has released some excellent studio work in the past. Schenken has 7 studio tracks, but unlike the typical multi-track masterpiece, these are more an exploration of what can be done with less. Yes, these 7 are a little "fatter" than live, but not by much. The remaining 9 tracks are actually live.

To be sure, the live parts have been mixed and processed following the live concerts, but the sound is live, and more so than the Nylons classic Four on the Floor at that.

Maybebop is a few parts Real Group, a few parts Comedian Harmonists, a perfect balance of ex-choir boys and rockers, class clowns and first-rate musicians. It's hard not to catch the Maybebop fever.

Pitch, rhythm and blend are excellent, as is typical for this group. The arranging ranges from good to brilliant, and stays mostly in the excellent range. Dynamics are perhaps a tiny bit less well-performed than on some earlier Maybebop releases. But the live energy and overall playfulness of the tracks seem to make this slightly diminished musicality unimportant.

The production isn't perfection, but it's pretty good, especially in matching the studio and live material. It's simple and clean throughout: a smattering of percussion and bass processing, a little reverb, compression and eq. Just the basics.

Maybebop's English is improved from earlier releases but still easily identified as Germanic. Still, there are many words which are now pronounced sans accent and it greatly improves the listenability of the English tracks.

Of course the bottom line is that most RARB readers are English speakers and most of this release is German. So get behind that or Schenken's the wrong purchase for you. Given how much comedy, lyric and context seem to matter on this release, I would recommend this much more strongly to fluent German speakers, but it's enjoyable in any event.

Schenken can be translated from the German as "giving a present", or perhaps "gift-ing", and it is certainly a wonderful gift Maybebop has given us this time! The hour-long Christmas-themed album is full of wonderful music and wonderful lyrics (mostly humorous, mostly in German). I even chuckled a bit when I unwrapped the CD case and discovered that it opens up into the shape of a present. The album seems to be part studio recording, part live audience — and from what I could tell from the audience's reaction, they enjoyed the gift as much as I did.

Obviously, native German speakers will get the most out of the album and its clever lyrics, but others like myself who speak German a bit will still get a lot out of it. Unfortunately, and unlike the last Maybebop album I reviewed, the lyrics were not included in the liner notes. (I did notice that the lyrics to six of the songs can be found on their website.) Often I had to listen to a given track several times before I caught on to the humor, but I was rewarded whenever I took the time to figure out the lyrics.

As an example: Der Rest für das Fest is a song with English and German deliberately mixed together, to mourn the loss of holiday tradition (in a funny way). Here are the actual words they sing, with my own English translation thereafter:

Translated, with formerly German words emphasized: "We wish you a merry Christmas and a happy new year... That's what you hear in every store... the songs of Christmas are almost all gone. The "sleighbells" now "jingle" and snow is called "snow"... "The children", our children are today called our "kids". They hear few fairy tales, and only know "hits".

The interplay between languages is very, very clever. Ironically, (I'm not sure whether deliberately or not ... ), three of the next four tracks are sung in English.

The third of those, Das Sching-Sching-Medley is a full six and a half minute medley of four contemporary English Christmas songs, moving from Paul McCartney's Simply Having a Wonderful Christmastime, to Chris Rea's Driving Home for Christmas, to Wham's Last Christmas, and finally to Band Aid's Do They Know It's Christmastime. The opening to the medley cracked me up as Maybebop replicated the fast "whaa whaa" sounds of McCartney's original. The only part I disliked was when they broke out the f-word in Driving Home for Christmas. It cracked up the crowd, but I was not amused. It seemed unnecessary, like a down-on-his-luck comedian going for a cheap laugh.

To summarize some of the other high points: Hail Holy Queen follows the Sister Act version fairly closely, with the hymn starting off traditionally, then going to a hand-clapping gospel style. Maria durch ein Dornwald ging is a subdued, contemporary arrangement of a traditional German song (c. 1500). Winterwunderland is a jazzy Winter Wonderland, with a fairly straight German translation. Der kleine Trommelmann is a version of the Little Drummer Boy where the boy ends up burying the drum. Morgen, Kinder, wird's was geben must be a traditional children's song, because the crowd first laughed and then went wild when Maybebop broke out into rap. It was pretty funny to me as well, when they did various studio rap effects like sampling, scratching, etc., presumably just with their voices. And in the hidden bonus track, they play a "Name that tune" game show with audience members, doing all the game show sound effects themselves, such as buzzers, dings, drum rolls, and strangely squeaked tunes.

For whatever reason, Maybebop reminds me vocally of a cross between the Nylons and the Blenders, both groups that I love. If you don't speak any German at all, you might want to pick up the album simply to enjoy the good vocals. If you speak a lot or even just a little German, though, this is really a "can't miss" Christmas album.

Everyone's favorite German pop vocal quartet is back at it with their latest Christmas-themed release, Schenken! As usual, the guys don't disappoint, and what you'll find here is another solid, well-sung, well-arranged, high-energy record. If you like Maybebop and/or Christmas, you'll definitely want to pick this one up.

Schenken! can almost be considered two separate albums in one. The first seven tracks are studio recordings, all of which are crisp, well-tuned, and generally awesome, even if you don't understand German (I don't.). As other reviewers have noted in the past, Maybebop's studio recordings seem to utilize pitch correction, rhythmic grids, and other post-production effects, but the end result always sounds earnest and natural.

This is likely because the singers' rhythm and harmonies are so tight to begin with, a fact that is evidenced by the last nine tracks on the album, which are live performances. Their on-stage performances are so crisp that I probably wouldn't have noticed for quite some time that they were live if it hadn't been for the applause before the songs started. Indeed, Maybebop maintains the same level of quality in live tracks 8-16 that they did in the preceding studio tracks. Because Schenken! offers both studio tracks and live performances, a listen-through feels fresh right until the end.

What I didn't get out of the studio recordings, as an English speaker, was how engaging and humorous these guys must be. There are times during the live numbers when the audience erupts in laughter, and I'm stuck feeling like a six-year old watching "Frasier". I can't fault the artists for not speaking my language, of course, but you should beware that some things will definitely fly over your head if you don't speak German. Nevertheless, it's clear that they put on a hell of a live show, because both the audience and the performers themselves sound like they're having a blast.

Most every track on this record is top-notch. The arrangements are so well conceived; the composers understand the limitations of a four-man group and tailor the charts to sound and feel more complex than they actually are. I especially liked the energy in the opening track, Schenken, and the beautiful simplicity in Der kleine Trommelmann. The men's voices blend perfectly, and while the solo voices don't necessarily floor me, they always manage to carry the song and complement the block nicely.

Interestingly, the songs I found least engaging were the ones that I found more familiar. The track Der Rest für das Fest (a take on We Wish You a Merry Christmas), for example, felt a little stale. Similarly, the Christmas medley (Das Sching-Sching-Medley) has some good moments but goes on a bit too long. These tracks are above average and worth listening to, but not quite up to the level of engagement that the other songs offer.

Maybebop's latest Christmas release is all you've come to expect from these guys, which is good, because I've been looking for a solid replacement for my Barry Manilow Christmas album. Rest assured that I'll be blasting some Schenken by the fire this winter, and so should you.