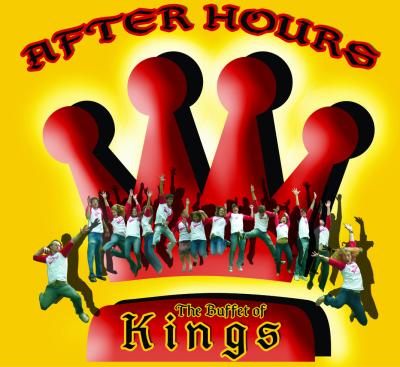 I have to believe the scores speak for themselves.

After Hours may be the only co-ed a cappella group at University of Rochester, and that inherently gives them fair claim to the title of "best" co-ed a cappella group at the school, as they state on their website. But if this recording is an accurate representation of the ensemble, the word "best" is sadly not one I could not justifiably associate with them for any other reason.

It begins and ends with the tuning, which is rampantly poor throughout the album. The instances are simply too many to enumerate. It's not just that the occasional passage or vocal line drifts out of tune. There are entire songs (e.g., Mad World) that are pretty much out of tune from start to finish. Opening chords of songs are not in tune (We Built This City) and endlessly repeated motifs like the monotonous soprano eighth notes in Fidelity are often just a smidge flat (and sometimes even more so). And So It Goes perhaps best illustrates this even as it also is the group's best performance on the CD. The arrangement works — that we know from the countless other groups that have recorded it — so the deficiencies in tuning and blend come ringing through even as the group turns in their best work.

Would that the tuning were the only problem: the bulk of the arrangements are circa 1991 and would have been a bit mediocre even back then. In quite a few cases, it feels like instrumental lines were just transcribed into vocal lines with little recognition that the resulting vocal parts might not be easily sung nor would they fit together as seamlessly as the instruments. In other cases, there are chord progressions and changes that just seem to be flat out wrong (the insistence on repeatedly not resolving the chord at the end of Accidentally in Love & Understanding was particularly aggravating). In yet other cases, the rhythms of the various vocal lines are at odds with one another. Few are the tracks where there is even a fundamentally sound underlying arrangement. Even in a case like You're Beautiful, where the first two thirds of the song are pretty decent, the tuning comes back to haunt After Hours in the bridge and throughout the final chorus and ending, where the harmony between the soprano 1s and 2s is particularly grating.

Especially during the holiday season, I feel guilty bashing an album so thoroughly and feel compelled to at least one thing a bit more complimentary. So I will note that for the most part, the VP by Jason Miller is pretty good, most notably in You're Beautiful and in an otherwise lackluster We Built This City. Why this asset was not put to use on a song like I Touch Myself remains a bit of a mystery to me.

Okay, I'm done. It's just not very good at all. I'm sure it's not for lack of trying but this is definitely one buffet to skip.

First the good news. The members of University of Rochester After Hours should be proud of two facts: they were able to produce a professionally recorded album as the group's fourth attempt at a recording, which includes the first recording of their alumni song And So It Goes, and based on their photos and enthusiastic singing they seem like a fun group of kids to hang out with. The rap that is tacked on as a hidden track to the end of And So It Goes is actually kinda funny. I laughed along with the group members.

Everything else in this review talks about how the album goes to pot from there.

There is not a lot of blending between sections or voices. The production techniques can't quite cover up the musical failings of the group. The balance is so off at the beginning of Who Knew that several people expressed the same disbelief about the group being co-ed after I showed them the cover photo. The women — indeed the better singers and soloists — are simply too loud throughout the entire disc. The guys are outclassed.

My one piece of advice for the next iteration of After Hours would be to learn how to sing effectively as an ensemble and to master simple musical fundamentals before spending any more money in a recording studio.

The arrangements are scattershot as to why they are bad, but are pretty bad throughout. Sometimes being too busy and convoluted Accidentally In Love & Understanding, and at other times lumbering and bland Mistake of My Life. A bad song just gets worse when you try to replicate guitar lines using what sounds like "junk" in the aforementioned "mistake" and "crap" as syllables in the almost as bad You're Beautiful. Especially when the whole group lands on the word on the downbeat in an otherwise silent space.

Two places where there seems to be a kernel of magic peeking through the debris are in Sylvia Keuter's version of Mad World and Adam Hall's Accidentally In Love & Understanding. Keuter has crafted an interesting take on Gary Jules' melancholy opus weaving the melody through various sections of the group. So while the execution is abysmal, the thought process is top-notch. The same goes with Hall's medley of Counting Crows and Elvis Costello. I generally hate medleys because more often than not, the arranger seemingly gives no thought as to why the songs should go together other than a cool factor. Not so in this case. Hall's arrangement has created a new lyrical storyline that is pretty amazing at times.

The Buffet of Kings is definitely a yearbook album. So if you're of the "golly-gee whiz, they've made a recording" fanatic, then by all means grab a seat at the table and enjoy a heaping serving of what After Hours is offering. The rest of us will stick to our diets.

You know that acute trifecta of physical discomfort, vicarious shame, and sheer disbelief you get when watching a Ben Stiller movie? The kind that forces you to cover your face with a pillow? The Buffet of Kings triggers a similar reaction.

First and foremost, the tuning is unforgivable. Nothing else really needs to be said about that, except that I hope After Hours will adopt a new recording method for their next studio effort.

Second, the backing block often disagrees on the rhythms, which surely contributes to the tuning problems. Rushing is rampant, despite some solid percussion.

The final piece of The Buffet of Kings trifecta is maybe the most difficult to address. There is almost no insight on the part of the group into The Point of each song. Misguided song quotes (Brown Eyed Girl stuck into Mistake of My Life), inappropriate syllables ("CRAP!" in the middle of You're Beautiful), and a general lack of acknowledgment of the songs' meanings plague the entire album. No one wants to hear basses sing I Touch Myself. Ending Leader of the Pack on the lead's "Gone, gone, gone" is arranging tee-ball, but After Hours clobbers the tee with the subsequent "hm" group chord. Mad World shows some promising, if inconsistent, darkness but only the sopranos really treat the lead with the ethereality it deserves.

For added bonus, a baritone actually sabotages the final phrase of the final song, singing chordal nonsense quietly, but audibly, intent on thwarting any effort to close the album with some dignity.