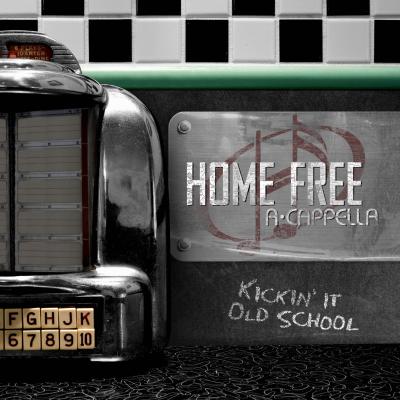 Home Free's Kickin' it Old School is a collection of 50s and 60s tunes and a few that just seem to belong to that era. These songs are performed as if they were part of a show choir musical review. Despite the added key changes and additional suspensions in the chords, Home Free just sounds way cheesier than the original recordings. It's obvious that a lot of work went into this. But the result is a sound that works best in a theme park. This is all about smiles and notes. It sounds like product. There's talent here, without a doubt. You can't miss it. But if there's heart here, I can't find it.

Now there are some high points. Let's start with the lowest of the highs. King Of The Road is one hell of a bass solo. Any fan of a real rumbler is well-advised to get a hold of this track. Few basses dare tread in these parts. Just make sure your subwoofers are up to it.

Tonight, Tonight (a pop-ish barbershop arrangement) offers Home Free an opportunity to phrase. And while they eschew the precision tuning and overtone alignment of true barbershop, it's still a standout for Home Free's own group cohesion.

Creativity points. I Feel Good is arranged with near abandon for the original. The result seems more a musical exercise than an expressive exercise — here the text might as well be nonsense syllables — but it's interesting, and shows a bold approach to arranging that few groups even attempt. This is also the group's tip of the hat to a more contemporary sounding style.

On to the negative ... Rhythmic accuracy and feel is troubled on this recording. Sometimes sounds are dropped perfectly with each beat in its place. But often there's some kind of tension between the feel of the song and the feel of the VP. The pocket, that sense of when a little late or a little early is just right, is largely absent. Rockin' Robin, Under The Boardwalk, and Blue Moon are some examples of when this rises to the level of real distraction.

Home Free have strong voices and they belt it out as much for fans of belting, as for fans of yesteryear's songs. And they do it all with a smile. For some listeners, that might be enough.

The only thing old school about Home Free's Kickin' it Old School is the song selection. From the title, I was expecting homage to the type of a cappella pioneered by The Persuasions; a bunch of guys, a couple of mikes, and a raw sound with (gasp!) minor bobbles left untouched by Pro Tools.

Instead, we get a fully contemporary a cappella album with songs from the 50s and 60s (with the exception of the 80s hit Kokomo, which they cutely admit was cheating in the liner notes). If they were truly going old school, however, "cheating" on this album abounds. The tracks are no strangers to Pro Tools, and are impeccable in terms of pitch and blend. The production is crisp and clean throughout. Definitely new school.

Home Free also takes liberties with the old school tunes. They have tweaked some of the melodies, Stand By Me and Under The Boardwalk in particular, which make singing along tough (one of the joys of listening to oldies, in my opinion). They interpret James Brown's I Feel Good through a techno lens. The vocal percussion throughout is more of the Dave Grohl ilk than the simple beats of the oldies but goodies.

Home Free's new album Kickin' it Old School is just that. Simple arrangements, conjuring a time when the world moved at a much slower pace. Chocolate malts, phones that rang in homes or required a nickel to run, and guys who opened doors for their dates. Okay, maybe the third still happens, but you get the idea. This type of a cappella is few and far between nowadays, so if you need multi-layered arrangements and hip vocal percussion grooves, you may just want to move on to the next album RARB reviews. If you're a Nylons or Rockapella (cover-band standards Rockapella, not original song Rockapella) fan, you should read on.

Home Free is good, clean fun. My favorite track is Saw Her Standing There for its energy and the free flowing scatting in the middle. I can envision Home Free performing at a theme park while families sit, listen, and happily bounce babies on their laps. Afterwards, they'd sit at a table, greet their new fans and sell plenty of albums. It doesn't sound like a bad gig. In fact, I'm a little jealous.

Percussion is better than the Nylons drum track, yet very pedestrian in relation to Jeff Thacher of Rockapella. The VP does kick it up a notch on I Feel Good, but it's relative to the simplicity of the rest of the drumming on the album. Their sound is all doo-wop, even if the backing vocals do occasionally move beyond the block chord "oohs/ahhs" and experiment with more of a groove.

Everything is solid here. Tuning is a non-issue, rhythm is steady, and the soloists are non-offensive to the songs they're covering (i.e., my parents won't need to say, "What are they doing to the Beach Boys?!").

And yet, there's something missing. Energy seems to be there. Nothing stands out sonically as bad or even borderline bad. Yet, I'm not moved to get excited about Kickin' it Old School. It may be the predictability of the arrangements. While good, they don't take us anywhere new or unexpected. Given the track list, Home Free may want to throw in a few curve balls to keep the listener on their toes and the sound fresh. While Tonight, Tonight from West Side Story could be thought of in this regard in relation to the track list, I don't think it brings anything new to the listener. In fact, it doesn't really fit on Kickin' it Old School.

I wish I could point out specific soloists or songs, but the fact is that Home Free is consistently good from beginning to end. If you like a cappella standards, I think you will enjoy this album. Will it be your favorite album in the genre? Probably not, but I think it'll be in your top ten.