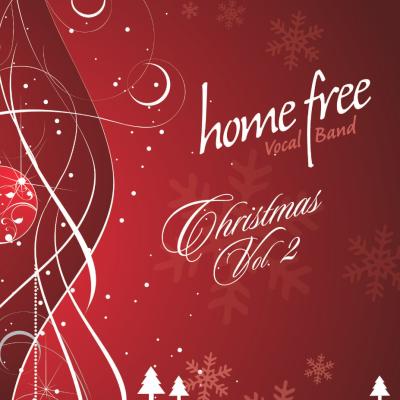 Technically, Christmas, Vol II is some of the best mixing, arranging, and singing you'll hear this year. Chris Rupp deserves a lot of that credit. But though he arranged the majority of tracks and sang, tracked, and edited on all of them, the silky smooth hand of mixer Darren Rust is an unmistakable presence in giving the album its incredibly pleasing sheen.

If you can't get on board with that, you'll develop cavities before you hit the halfway point. But drink the punch and you will find yourself tapping your toes and snapping your fingers along with the guys.

The smoothness and pureness of the sound will remind listeners of the great traditions of Christian a cappella so popular in the American South and Midwest. Jazz lovers will also appreciate the rich chords, the scatting and the rhythmic intricacies of songs like It Came Upon a Midnight Clear, set in 5/4 with a touch of "Take 5" thrown in for good measure.

Though Home Free doesn't quite display the soloing chops of a group like Rockapella, this is still a release that Rockapella fans are likely to enjoy. The brightness, the balance between simplicity and complexity, and excellent high tenor leads and low bass (from powerhouse rumbler, Elliott Michael Robinson, to guest, and former Blue Jupiter bass, Tim Foust) — all appeal to the same type of listener.

Material like Away in a Manger, Go Tell it on the Mountain, I Wonder as I Wander or any of the usual Christmas music suspects won't evoke passionate emotions from most listeners, even under the deft arranging of Home Free, Tim Faust, and former Cadence member, Dylan Bell. But Christmas, Vol II is just the shiny, jazzy, easy-listening ornament that generations gathered by their Christmas trees will enjoy for years to come.

Based on a read of their previous reviews, Home Free's Christmas, Vol II sounds like it has a lot in common with Christmas, Vol I. Interesting, creative arrangements? Check. Impeccable, contemporary sound? Check. This album has a lot going for it, and only a few very near misses holding it back. In short, my guess is if Vol I was your thing, Vol II will be right up your alley.

In a way, the arrangements kind of steal the show on this album. The leads are very good, but I found myself more often interested in what the backgrounds were going to do next. Conventional wisdom might suggest that the opposite ought to be true — that the lead's storytelling should carry the song — but to be honest, in the context of Home Free's sound, the inversion of roles didn't bother me much. Plus, like I said, the leads ain't bad at all.

Highlights: the opening track, Go Tell it on the Mountain, pulses with energy, and bounces along on the strength of Dylan Bell's horn riff-centric arrangement. It's a perfect choice to open the album. The swing of Rockin' on Top of the World is infectious; a playful arrangement supported by some solid, varied drums.

So what's the beef? This album is bombastic: grand and unrelenting in its contemporary pop aesthetic. Most of the time, the sound suits the material well, the aforementioned tracks being places where the match was especially apt. The problem I have is that the guys never seem to let up from this vibe, and it lends a bit of cheesiness to some of the more heartfelt material. Case in point, I Wonder as I Wander is harmonically gorgeous, but the sleek, metronomic production on the voices makes them sound cold (0:58 — "for poor ordinary people" sounds especially locked in time). This sound is never unpleasant, but for some of that more personal wintry music, I crave human warmth to shine through the cold veil that production can drop between performer and audience.

Of course the slick, contemporary sound is perfectly at home on the pop charts at the moment, so I can't fault Home Free too much for attempting mass appeal. There is definitely substance behind the style, and the group's skill is very much apparent. This is an album of tight, contemporary holiday harmony. If that's your thing, this (and the prior release) are for you!

There is something unbelievably endearing about Christmas a cappella. Stripping down the treacly orchestral arrangements that bombard us every year to their purest vocal forms seems to just work. Home Free achieved a wonderful mix of vocal earnestness and technological bells and whistles on their first Christmas release, which I reviewed earlier this year. I'm pleased to report that their follow-up release, Christmas, Vol II, is another variation on this winning formula.

The arranging is fantastic on the album. I love the classical vocal jazz sound in the intro to Silver Bells, the fresh and inventive harmonic and rhythmic take on Joy to the World, and the dorky-but-fun take on Go Tell it on the Mountain. And It Came Upon a Midnight Clear alternating between 5 and 6? I'm there, though also not entirely convinced by the "Take 5" quotes. I'm also very impressed by how Home Free keeps up the energy, even on a moving ballad. The whole album feels very vibrant and alive, fighting the idea that a strongly-produced album will sound sterile.

I'm also pleased to report that the production remains fantastic. The Auto-Tune is tastefully used to enhance group sound, never used to clean up a weak soloist or vocal line. The vocals pop out with warmth and clarity, not obscured by bass or vp (which both sound fantastic, by the way). Some of the production choices are definitely risks; All I Want for Christmas is You sounds a little like it was record by Electric Light Orchestra with its trippy delay-laden backgrounds, but I've got to say that it works for me.

So why the "4" and not a "5"? Well, the only thing this album lacks compared to Home Free's previous effort is standout tracks. There are plenty of great moments on the album, but no tracks warmed my icy heart enough to make their way into my regular rotation of songs (with the possible exception of the heartbreakingly beautiful I Wonder as I Wander, which is pretty special). It's a solid professional effort, but nothing on the album really pushes it into excellent territory.

If nothing else, though, these two Christmas albums have introduced me to Home Free, a group that I'll be watching with continued interest. Their creativity really is their forte, as is their ability to take some pretty exciting risks.