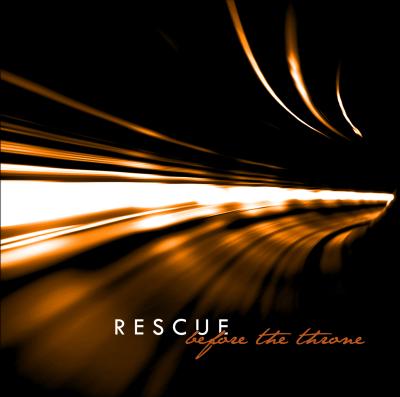 What a deliciously professional new album from Rescue! Before the Throne is polished, smooth, and lush without losing any focus. Great voices, great songs, great sound.

All the songs on this disc seem well chosen and well ordered, with a nice mix of fast, slow, and medium pacing. I gravitated toward the slower numbers Before the Throne and How Great, and part of their allure was the contrast. Most of the faster tunes have slick and consistent percussion throughout, full of brushes, high hats, and synthy snare. It fits the genre and it's performed well. It's also nice to have a break.

Horn lines are perhaps the biggest treat, once you get used to the overall great sound and start listening to the individual songs. The title track and Somebody's Watchin' both have these wonderful horn lines that offer a completely new texture and a warm mellow sound. For a group that's just four singers (with a few extras for the album), the horn duets add a much-appreciated extra texture.

That kind of variety is important on an album like this, where the songs sit in the same range and the solo voices offer essentially the same timbre. The bass lines don't really come out, except in the vaguely Carribbean Love the Lord. The unison at the end of How Great is another effective changeup, as are the periodic switches from solo-n-band to group harmony. Even the percussion sampler isn't too jarring. A guided tour of vocal drum styles isn't something I need, being immersed in the genre and all. That said, this one is well done and it sits at the end of the disc, where I can avoid it and Rescue's many fans — many of whom may never have been exposed to these sounds before — can dive in at will.

All the songs sound pretty good, with the original numbers fitting in with a nice selection of covers. It struck me as a well-chosen set of songs that would be new to most of their audience, rather than a rehash of other people's greatest hits. The songs cover the adult contemporary spectrum, from kind of pop to a little bit jazz and all of the nice grooves in between. The Christian theme is omnipresent in the lyrics, without hitting you over the head musically. This album is definitely a contemporary Christian record rather than gospel, but it mercifully steers clear from the preachy Hallmark vibe that ruins so much of this genre's appeal to a broader audience.

Overall, Before the Throne is a strong, strong disc from Rescue, guaranteed to fit in wherever it lands. We're lucky to have them in our community and I look forward to what they do next.

The Christian pop group Rescue has added a lot of funk, rhythm and blues, and soul to their repertoire since their last non-Holiday album, The Difference. Their newest recording, Before the Throne, is filled with expressive passion, but doesn't break any new ground in a cappella musicianship. What is most amazing is the fact that Before the Throne fully establishes the group as a pop band who ministers (which I alluded to in my review of The Difference).

Before the Throne puts Rescue on the level of, say, Eclipse in terms of creating a religiously-inspired tune that also happens to be a great pop number. The call-and-response number Love the Lord is a little nugget of goodness that doesn't try to be more than a crowd interaction number with a positive message.

And that in a nutshell has always been the power behind Rescue's appeal to me: A group that doesn't spout about fire and brimstone or the eternal damnation of the soul if you aren't just like them. In the song Please Come, they radiate a positive light which is the true meaning to me of having faith and trust in something:

From a musical standpoint, there are some incredible highs and a few embarrassing lows on the album. The quintet is now a quartet and their sound has matured into a more urban — daresay "urbane" even — quality. The songwriting has gotten stronger. The production is slick and polished. And the soloists are all fairly educated in an earthy and totally captivating approach to making music. Even the guest vocalists slide into their parts with nary a blip on the radar. Steve Cross more than makes up for the departure of Tim Storms on bass. Unleashed falls just short of being the most amazing song of the year, but it can still inspire goosebumps in the listener. And the Take 6-inspired song For You is truly de-gaga.

The lows are more gut-feeling and emotionally based than analytic criticism. On the flip from For You, the other track I Love You Lord only succeeds in exposing the fact that Rescue is not as talented as Take 6 (yet). The vocal placement on the song sounds too much like an imitation instead of an homage and it fails. There are weird pitch issues on Somebody's Watchin' that really perplex. I don't have the words for the reaction I experienced after listening to it a couple of times. Compared to the rest of the album, the song sounds under-pitched and anemic during the choruses. It doesn't lock, which is a shame for one of the lone upbeat songs on the album, which is another problem. The tempo markings of the songs has the potential to make this album really boring except for the most diehard fans. Songs begin to flow into one another with a subtle loss of coherency. And I love Brandon Bell's drumming on the other tracks, but a full four minutes of his drumming as the album closer was about three minutes too long. "I don't know what I'm doing." Obviously.

My closing sentiment in my review of The Difference hasn't changed in the years since first listening to the group: "Yes, Rescue is a ministry, but they are also a band that sings with passion and professionalism. They have the power to convert you — into an appreciator of great music." Except now there is even more depth and command to the sounds the guys are producing, and the music rejoices in it.

Rescue's latest album, Before the Throne, won a spot on Sing V and the CARA for best religious album for a reason. It's good. Real good. The men of Rescue offer up some excellent vocals and arrangements that demonstrate a nice energy and conviction about their subject matter. The question is, is this album for you?

First question, do you like religious albums? You're going to be able to get into this music a lot easier if you're listening with an inclination toward the spiritual. That may seem obvious, after all this is a religious album, but I have to say that I've heard spiritual albums that are more accessible than this one. As albums based on faith go, Before the Throne has a lot more emphasis on the beauty and reverence of worship than on the celebratory aspect of faith. There's nothing wrong with that approach, but if you're looking for more toe-tapping in your prayers you'll probably be more in tune with an album like Octappella Christmas or even Eclipse's Grateful Praise. Both of those recordings have more of a festive atmosphere largely absent from Before the Throne.

Next question, do you like bass? There's a lot of it here. Sometimes there's even a bit too much. There are moments where the middle and upper voices are overpowered by the bass, which makes the arrangements harder to appreciate. The soloists thankfully tend to cut through well, which is a blessing because they're almost all very good. A little more from upper voices would be nice next time around.

Third question, do you like neat vocal effects? There are a few sweet ones here. The trumpet sounds in the title track are really well mixed and add a neat dimension to the atmosphere of the song. The same effect is a little less effective when it comes back on Somebody's Watchin', but still cool.

If you answered yes to any of my three questions, this album is probably for you. To make a more universally appealing album, I would suggest that Rescue consider injecting some more upbeat music into their next effort. This group has the slow and beautiful side of their music down pat, and they certainly demonstrate the ability to mix things up on track one, Unleashed. A better balance between the introspective and rockin' would make for a much more interesting listen.

To order this album or its tracks visit the group's website or iTunes.