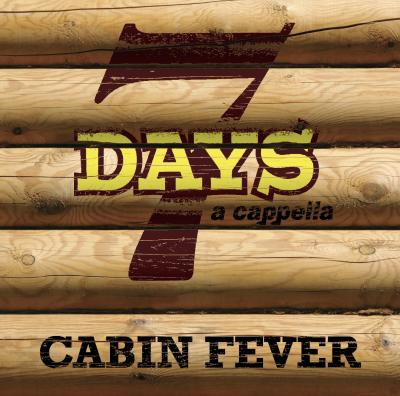 Cabin Fever showcases a group with lots of potential. With only seven tracks and 25 minutes of music, Cabin Fever offers an intriguing taste of the University of Minnesota's co-ed Seven Days A Cappella. Decent musicality and superb engineering make Cabin Fever a solid listen.

Seven Days creates a strong foundation with its arrangements and singing. Arrangements are sufficient throughout, but Joshua Duchan sets the bar high with his work on Makes Me Wonder, Feelin' Good, and Desperado. I was especially impressed by Duchan's versatility: Makes Me Wonder is punchy, upbeat and energetic, while Desperado uses more traditional "ooh"s and "dum"s to build a lush texture, and nails some tricky chord progressions.

Singing is solid as well. I was especially fond of the solo work. On most of the collegiate fare I review, the soloists expend too much effort trying to sound like the original artist instead of giving an original performance. In contrast, Cabin Fever features several tracks where the soloists really own their songs (even if there is some occasional oversinging). Carrie Noble makes Viva la Vida actually palatable by dropping the original's whining petulance; Isaac Fitzsimmons adds some nice husk (and tremendous diction) to Desperado; and the 'tude on Let's Go Crazy is just right. Unfortunately, the singing in the block was hampered by an overly compressed feeling and occasional mousiness of the women in the upper registers.

The true standouts on Cabin Fever are James Cannon and Ben Lieberman for their fantastic engineering. It feels like each note and each phrase has been carefully massaged to fit into the energy, feeling and arc of each track. Percussion is top notch, matching each song perfectly. Stereo effects are also used to nice effect. No voice, no line ever feels out of place, and the texture is balanced. The overall effect is a polished and coherent EP.

The main thing missing from Cabin Fever is more music. These seven tracks show great promise, and I'm excited to hear if this group can expend the effort across a full-length release. I suppose the main point of an EP is to interest the listener and make him want more. If that's the case, count Cabin Fever as a success.

Cabin Fever by 7 Days sure is a nice-sounding album with clean production. It doesn't often "wow" you, but it is certainly better than average fare these days. 7 Days is a mixed group whose sound typically consists of a soloist (soprano, alto, or tenor), an instrumental bass line (no words, ever), two vocal percussionists (snare and bass drum), and mostly subdued interior parts that periodically break out into words. They are very capable singers whose harmonies are nearly always tight.

Let me begin by complimenting everyone involved in the album's production. That includes Ben Lieberman, Ed Boyer, and James Cannon. I found that when I noticed the hand of the producer it was nearly always to say "That sure was a nice touch." Those moments included things like echoes, artificial crescendos, "wah wah" and trumpet sounds, and snare hits that occasionally alternated between left and right speakers. There were at least a couple of nice moments I noticed where the soloist or backing vocals were subtly panned from side to center. Two specific moments that made me say "Oh, cool" were the enhanced bass drum effect in No Air, and the old-fashioned feeling record-type style of the "Oh no, let's go" parts in Let's Go Crazy. I liked that the vocal percussion split the line between an unedited live feel, and a "no human could ever make sounds like that" style.

There are several places on the album that stand out. In 8th World Wonder, music and lyrics from U2's With or Without You are mixed in halfway through the song as a duet with the soloist. It sounded a little odd to me the first time through, but on the second listen I decided I really liked it. The soloist, Carrie Noble, is outstanding. Another outstanding soloist is Lloyd Clauson on Feelin' Good. He enters all alone, grabs the listener's attention, and proceeds to carry the song with an easy, bluesy feel. I really enjoyed the "instrumental" section just past the midpoint of the piece where the band goes on for a minute simply grooving together. Carrie Noble has another fine solo on Viva la Vida, and manages to obtain an interesting sultry quality to her voice; I was quite surprised to find out it was the same woman soloing as on With or Without You.

The lows of the album occur when the group fails to sing with enthusiasm. Uninspired arrangements are likely the cause of this in at least a couple of places. Makes Me Wonder was one such. The soloist is okay — pretty good actually — but doesn't really get a chance to shine since the melody (and harmony, for that matter) is kind of repetitive. Desperado is another uninspired effort. The arrangement — with mostly block chords, no interesting background parts, and hardly any vocal percussion — seems designed as a showcase for a soloist. Yet the soloist (Isaac Fitzsimmons) is not strong enough and doesn't sing with enough energy to capture the attention; consequently, the number falls flat.

All that being said, the highs do easily outweigh the lows and I heartily recommend the album.

P.S. I must issue a profanity advisory for Makes Me Wonder; it has multiple "f-words" in it.

On Cabin Fever, 7 Days does what I wish more groups would do: release an album/EP with a shorter track list, enabling the group to focus on fewer songs in the studio. It's a great move, especially for a debut, and even on this shorter album, 7 Days gives a clear picture of its style and vision. The group is going for a full, modern pop sound, and for the most part, Cabin Fever is an admirable starting point.

The only obvious problem with a shorter album, of course, is that fewer songs means that each track will be subject to more intense scrutiny. Let's start with the liner notes: if a group is not going to credit the songwriters of each tune (and that's a rant for another day), then it should at least learn the distinction between "OPB" and "APB". There is a difference between crediting the original performer of a song and citing the performer who inspired the group's arrangement. So when 7 Days notes that Feelin' Good is "OPB Michael Bublé", it is ignoring the song's long, rich history and over four decades of covers and interpretations. (For the record, while "OPB Nina Simone" would have been acceptable, since her version is by far the most universally well-known and often thought to be the original, the song is originally from the 1965 musical The Roar of the Greasepaint — the Smell of the Crowd.)

Even without the liner notes, though, it's obvious that 7 Days is emulating Bublé on its version of Feelin' Good. The track captures everything that he does well: swagger, dramatics, and an uber-smooth male lead. At times, it feels a little restrained, though, and that's my biggest complaint with this and other tracks on Cabin Fever: there are parts of Feelin' Good where I wish the soloist would just let loose a little bit (like the climactic "Freedom is mine" line), and instead, he sounds unnecessarily timid.

There are a few other moments on Cabin Fever that just seem like the uncertain first steps of a group's first album: there's a "za-ba-da" in the bridge of Feelin' Good that sounds like the syllables are being read, and the first few bars of Desperado are a messy melange of "dew", "dah", and "doh". The choice to use a female soloist on Makes Me Wonder strips the song of some of its texture; part of what makes Maroon 5 so interesting (and distinctive) is Adam Levine's airy falsetto, and that charm is lost in this version.

Still, there's plenty here to like: the percussion is solid, and the group has some creative arrangers in its midst (8th World Wonder contains a snippet of With Or Without You that blends seamlessly). The group has a distinctive sound and a clear direction, and Cabin Fever does what any good album should do: it leaves me excited to hear how this group matures and develops on future recordings.