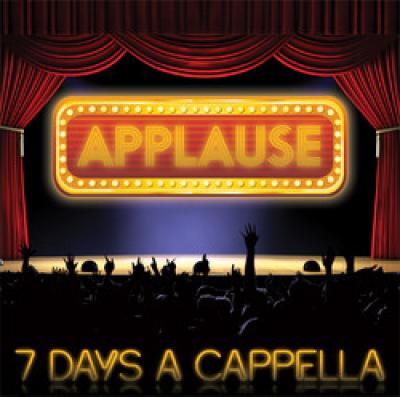 Applause is the latest album from 7 Days, a co-ed a cappella group from Minnesota. Although there are many nice sections to the album, many things about it rubbed me the wrong way. Some of these will be detailed below.

First, many of the soloists have unpleasant voices. This includes all but one of the male soloists (the single male exception was on The Way I Are), and the female soloist on Why Should I Cry for You. There is a certain harshness about the album to which the soloists contributed. One of the worst offenders is the rap section of Stronger. There are two voices (or maybe a single voice recorded twice), slightly out of sync with each other, both using extremely gravelly tones. Another bad offender is in Baba O'Riley (from The Who), where the harsh male soloist almost single-handedly turns some good arranging and some cool back-up vocal tracks into something unlistenable. This Side is also that way — my favorite parts are the beginning and ending, where there is no male soloist but rather just background chords and arpeggios. Why Should I Cry for You continues this theme, the harshest female soloist (who is also out of tune in several places) making a strange choice for final song of the album. It left me not wanting more. It is a shame there are so many sub-standard soloists, because there are also a few very nice soloists that may consequently get forgotten — the best ones being Jessica Chung in Release Me, and Carrie Noble & Gina Hanzlik (or possibly Kate Raddatz) in The Telephone Call.

Second, the intensity isn't where it should be. For example, after listening to the Backstreet Boys section of The Telephone Call (it's a mash-up between Lady Gaga's Telephone and the BSB's The Call), I decided to listen to the original because I wasn't very familiar with it. The original had so much more energy and intensity, I was blown away in comparison. This is true for many of the other songs: more intensity would enable them to grab my attention much more than they did.

Third, and this comment goes for a lot of collegiate albums I've reviewed: just because the original artist did something in a song doesn't mean that you should do the same thing. What worked in the original album may or may not work in your album. So, to use the trite phrase, make the song your own! The first time I remember this being a serious issue was when I reviewed a cover of Mika's Grace Kelly. Great song, but the group imitated the spoken "Humphrey, we're leaving. Ka-ching!" at the very end of the song. That made sense on Mika's album, which had a number of additional such comments during and between songs, but not on their album. Back to 7 Days: The Telephone Call includes the short spoken conversation that's in the BSB's original as the bridge between Telephone and The Call. As I listened to it, it just seemed odd and out of place to me.

Fourth, there are some questionable arranging choices. For example, as I started listening to Autumn Leaves, I initially thought, "Oh, this is an interesting introduction." Then, after about a minute, I thought, "Wow, this intro is quite long." Then later, I realized it wasn't the intro, it was a strange, slow, re-interpretation of the classic melody. It would have worked as a lead-in, but it really didn't work for me being the song itself. Another moment that doesn't work is towards the end of The Telephone Call, where a key change is enacted by having everyone sing "Here it comes, here's the key change... this is it, epic key change" (the last occurring as the key change happened). If the song had been a parody, such as Da Vinci's Notebook's Title of the Song, then perhaps that would have been fine. But as it is, it seems like the group is trying too hard to be clever.

I feel sorry about all the negative comments in this review, because Applause isn't nearly as bad as the impression I know I'm conveying. But it also is not going to become a regular in my collegiate a cappella rotation.

7 Days jumps all over the place on its first full-length album: the group goes from jazz standards to contemporary pop hits, from indie bands to classic rock standards. Many groups face the same problem: it's difficult to put together a bunch of "songs we like to sing" into a coherent, cohesive album that flows for the listener.

Applause does a pretty good job for a first album (the group's first release was an EP, Cabin Fever), but there are obvious places for growth. 7 Days needs to figure out its real strengths. While Cabin Fever left the impression that the group would be tackling cutting-edge contemporary tunes, the songs on Applause that are the most memorable are not the radio singles. Honey is sultry, and the jazz standard Autumn Leaves is really lovely, if a bit out of place on this album (kudos to Kelsey Bitney for her arrangement). Not surprisingly, these are the only two songs with any memorable use of dynamics — the group could've pushed both songs (and the rest of the album!) further with dynamics.

The rest of the album is a bit too plagued with rookie mistakes. The harmonies on Release Me are choppy; Use Somebody is really, really, really slow; and Baba O'Riley just doesn't have the swagger or energy that it should — and the backing syllables are really distracting. 7 Days also performs two medleys on Applause, to varying effect. Both The Telephone Call and Stronger use the same basic formula (song A + song B + mash-up of A and B), and both are a combination of songs related by theme (as opposed to original artist). On The Telephone Call, the transition between the Gaga and Backstreet Boys sections is so abrupt that it almost seems that they are (or should be?) two separate songs. The transition on Stronger is better, but the mash-up section there is a bit muddled.

All in all, Applause is a good start for 7 Days and will certainly be enjoyable to fans of the group. But if the group wants to make a distinctive name for itself, it needs to home in on the songs and styles that its singers can perform the most convincingly — and push things like dynamics even further, to give the group as big of a range as possible.

I'm not sure what happened here. From what I could tell from their previous release, Cabin Fever, the latest from 7 Days should be one of the better full-length albums to have come out this past year. Instead, I'm left feeling as if I've seen greatness and had it subsequently pulled away from me in a bait-and-switch of unclear provenance.

I can tell the members of this group can sing. And I mean really sing. Soloist Jessica Chung on Release Me is putting her heart out on the track for you to see, and it comes across admirably. But she's backed by often scarily-in-tune robotic backs that sap a ton of her energy. Even the giant, echoing kick drum — which sounds awesome, might I add — can't make up for the fact that the backs sound like laser beams shooting music into my brain. This is especially evident in the "infinite 'ah' pad" that runs under the final chorus. It's a climactic moment, and it needs some extra support, but it's so inhuman and uniform that it doesn't accomplish its intended effect.

Indeed, harsh over-tuning of backgrounds and occasionally solos is what seems to be the most obvious problem with this album. Autumn Leaves, which should be a rich, thick vocal jazz arrangement, instead sounds like playing an electric piano set to "voice" behind an admirable if similarly feeling-sapped lead by Kristi Thompson. Honey, another jazz-driven song, loses its bounce, and even Why Should I Cry for You, arranged by master-of-thick-chords Tom Anderson, manages to sound thin.

The other main issue with this album is tempo. For some reason, every one of these songs feels like they were recorded anywhere from 4 to 20 beats per minute too slow. Use Somebody is the worst offender; the original song runs around 130 BPM while 7 Days' version plods along at about 112. (That's about the difference between Lady Gaga's bumping Bad Romance and the driving, lumbering Battlefield by Jordin Sparks, for those keeping score).

Lastly, I'm not sure what to say about some of the medley choices on the album. Those who have followed my reviews or know me personally are aware of my bias against medleys, with the exception of those executed excellently (see En Vogue Medley on Purple Haze's Feed the Sound). These are not great. Aside from the very predictable structure and almost excruciating length of both The Telephone Call and Stronger, the soloists are incredibly mismatched for the songs.

I wonder what happened here. I know from hearing 8th World Wonder off this group's previous album, and the first track off of Applause, that 7 Days is brimming with talent. I hope for the group's next release that it isn't flattened into submission and is allowed to shine on its own merit instead of that of the even-tempered scale.

You can order 7 Days' sophomore album "Applause" by visiting www.umnsevendays.com and selecting the "Store" tab.