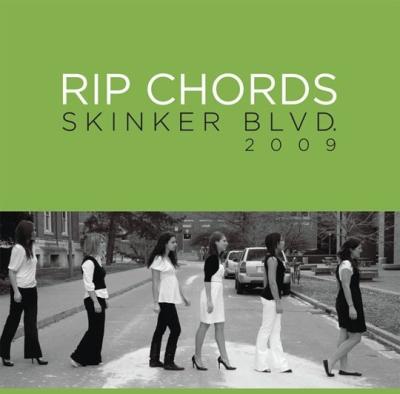 There's a three-song stretch in the middle of the University of Illinois Rip Chords' 8th album, "Skinker Boulevard", that illustrates pretty much everything I liked and disliked about this album.

We start with Stop. When it begins, it is virtually unrecognizable as being performed by human beings. Without dredging up years old discussions of just how much processing and sampling is or isn't palatable or acceptable, I will say that when I'm listening to a cappella, I like to have at least some small reminder that there are people rendering the music — without the assurance of liner notes. As an aca-purist friend of mine is fond of saying: "Just because you can, doesn't mean you should" and for me Stop is either the group letting their engineer/editor Scott Malinoski and mixer James Cannon get a little too carried away, or the group masking a limited and endlessly repetitive arrangement with special effects. Either way, even though the end result is a good facsimile of the original song and sounds super slick, it left me empty and unsatisfied.

Then follows Who Knew, which is a 180 degree turn from all that has come before it, with its almost naturalistic (at least by comparison to what's come before) and undoctored sound. Unfortunately, what's left is a very basic arrangement grounded in mostly "doos" and "dahs" and a recurring "di-din din dah dah dah" motif that just repeats ad nauseum. On the one hand, it was an incredible relief to actually hear the ladies sound like something resembling themselves. On the other hand, stripped of the gadgetry, it's pretty but not terribly compelling music-making.

And finally we arrive at Breathe, which is as close as the Rips come to striking the right balance between human and machine-made artistry. The first verse and chorus preserves the more natural sound from the previous track, with sampled VP and some additional effects entering only at the second verse without completely sacrificing the human quality of the sound. The verse following the bridge strips the sound back down and reverts to a straight block chord background, which then builds back to the earlier complexity and intensity as it approaches the final chorus which repeats and then offers a proper ending with a slight bit of variation in the background voices. It's by no means a perfect arrangement or performance, but for me, it's the best this album has to offer (even if it's not the only track scored as a "4").

Whether or not it was a direct reaction to the RARB review of their last album, there seem to be marked improvements in this latest effort (based on the comments of my colleagues): specifically, a more eclectic and engaging repertoire and better syllable variation. There isn't a blow-you-away soloist to be found here, but the work is steady and solid throughout with nary a clunker among them — though I do quibble with Cannon's tendency to mix the solo too much within the background block rather than in front of it, especially with the lower solos that some of the ladies have to push to reach.

Notwithstanding all my issues, the reality is that overall, this is a pretty darn good album — one of those "whole is greater than the sum of its parts" that will probably amaze casual listeners or the uninitiated even as it may disappoint die-hard fans — or at least leave them unimpressed. I like the direction the Rips are going and I only hope they can beef up the arranging a bit so that James and Scott's work can be more of an enhancement of the group's own artistry and less of a substitute for it.

The Rip Chords must be taking some iron supplements, because Skinker Blvd shows only a little of the anemia that weakened Chordially Yours. However, the energy that the Rip Chords have found is a sweet and girly energy. While this energy gives the album cohesion, Skinker Blvd suffers from an excess of prettiness.

Songs like fluffy Stop are perfect for the Chords. Girl power! They are also successful with ballads like Breathe, Lessons Learned, and City. The prettiness is anchored in these songs by the soloists' emotional interpretation. Unfortunately, tracks that require anything raw or gritty, like Rocksteady and Who Knew, end up sanitized. While pleasant, a comparison to the originals reveals remnants of the Chords' past anemia.

There is nothing wrong with the production. James Cannon's work on Skinker Blvd is of the "as needed" variety, a style I much prefer. It never interferes with the music, nor does it draw attention away from the Chords' dulcet voices.

Though the energy and production have raised this album above the average, the group needs to improve their arranging if they want to dominate. The best arrangement on the album by far is Rocksteady, contributed by recording engineer Chris Rishel. The Chords arrangers need to embrace some of the rhythmic and syllabic creativity evinced by Rishel and leave blandness behind. Or just buy all their arrangements from him.

The Chords should also reconsider some of their song choices. In a genre reliant on covers, collegiate groups should always be wary of iconic versions. That is, unless they believe they can top it. This requires an awareness of collegiate a cappella that some groups may not have. Listen to BOCA and Sing. Listen to albums from a cross-section of collegiate groups across the country. Arrangements would improve, and groups would be more circumspect in which songs they choose to record, if not which songs they choose to perform. For example, if the Chords had listened to BOCA 2005, they might have chosen to leave their version of Going Under to live performances. Like much of their album, Going Under suffers from an excess of prettiness. They might also have decided to leave off the overdone Signed Sealed Delivered.

This is one of those albums that an old a cappella grouch like me has a hard time comprehending. My thoughts are so conflicted. It sounds so crisp, so clean, so… perfect. The album is beautified with a heavy amount of autotune, sampling, and pretty after-effects, and, frankly, everything sounds pretty awesome. But, as many would suspect I would question, is it TOO awesome?

Well, let's examine the components a bit closer. We don't even need to talk about pitch or rhythm; those are perfect. Soloists are quite good, with only a few weaker performances that stick out. Arrangements are actually pretty strong throughout, and the producers did a fine job allowing the mechanics of the charts to carry the songs forward. Going Under, Rocksteady, and Lessons Learned are among my favorites — the leads sing with passion and the arrangements are interesting. Above that, the song choices are pretty good. The Rip Chords made a point to steer clear of cliché tracks, and for that, I am infinitely appreciative. Honestly, this album offers a lot of good stuff.

The one thing that suffers for me is the energy. This album suffers from the classic problem of production methods interfering with the general level of excitement. The production on its own is fine for what it set out to accomplish — in fact, it's produced pretty well. But as a result, natural energy is noticeably missing. The worst offender in this case is Signed Sealed Delivered. This song should ooze charisma, but it falls kind of flat because you don't get the feel of a grooving, pumped up performance. Instead, you hear a bunch of pretty voices faithfully hitting every note and rhythm perfectly. It's nice, but it just doesn't keep my attention.

Bottom line? It's a solid album. The girls are clearly good musicians. They can sing, they can arrange, and they can put together a quality product. But it doesn't always capture the spirit of a cappella in its classic sense — the songs don't evoke the image of a bunch of college kids singing popular music in a dormitory stairwell. That's what collegiate a cappella is to me, but I realize I'm in the minority. If it's all about radio style perfection to you, then pick this one up.

To order this album, visit CDBaby.com or the iTunes store.