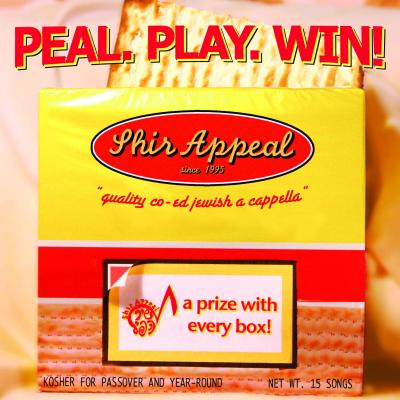 From the surprise chord progressions of Kayitz to the unusual meter changes of The Only One, from the haunting opening seconds of M'flas Matzav HaRuach to the Hebrew rap of Lo Frayerim, Shir Appeal shows signs of shedding the standard collegiate sound for an artistry of their own making.

What holds them back is inconsistency. Ten finely polished songs would have been a much more compelling listen than the fifteen presented here.

On the plus side, Peal. Play. Win! is front-loaded, and that's the right programming choice. The first four songs are really good. Strong leads, supportive production, and interesting arrangements make for a winning combo. Ani Shelach draws the listener in with the lead's heartfelt, world rock delivery. Kayitz is every bit as strong and for all the same reasons.

But as the album progresses, weaker songs begin to spoil the Shir Appeal lovefest. Lu Yehi prominently features low notes that simply don't sound good in the lead's ranges. Repetitive and dirge-like, even the solid production just can't save this song. Perhaps my least favorite track, Two at a Time, suffers from insipid lyrics and a grating, child-like melody. You will desperately wish that this song had also been sung in Hebrew.

Actually, Shir Appeal's near universal use of Hebrew lyrics and frequent use of Jewish scale forms do much to give this mixed ensemble the exotic gravitas that world music is generally afforded. Sometimes, not understanding the lyrics makes for a better listen.

So, pros and cons. It's an iPod world. If you are a fan of the genre, buy the album. Enjoy the best of what Shir Appeal has to offer and skip the rest. Because when they're good, they're really good.

But Shir Appeal sounds the same as they did on Zoozin' and Unpealed. They have neither progressed nor regressed, while the definition of "quality a cappella" has moved beyond them. Still, if those two albums are in your collection, chances are Peal. Play. Win! will make its way there as well.

While the engineer leaves Peal. Play. Win! with the standard rhythm and pitch perfection of most collegiate a cappella, there is a wash of production throughout that leaches the songs of brightness and clarity. For example, Halleluyah (Psalm 146) (think Latin hymn sung by a choir in robes, but in Hebrew) is gorgeously arranged, but the impact is lessened by the heavy "large sanctuary" sound effect.

I am not sure why they chose to open the album with Ani Shelach. First of all, it is a ballad. Most albums kick off with something livelier (like the spoken word Lo Frayerim, verses reminiscent of One Night in Bangkok), or at least with one of their best tracks (like M'flas Matzav HaRuach, a pop song with some strong Middle Eastern hook).

Shir Appeal instead put forth a ballad completely ruined by the soloist's nasally little girl voice. Such a voice can be used effectively, however, and her second appearance on Bosem Tzarfati (evocative of Hips Don't Lie by Shakira) was far more appropriate.

The group also chose to end with a ballad. P'tach Libi, though well sung and pleasant enough, was utterly forgettable. Again, they could have gone with a better or livelier track. If they insisted on ending with something slow, why not pick the song that is unlike the others, i.e. Halleluyah (Psalm 146)?

Odd album order, production wash, and solo annoyance aside, Peal. Play. Win! was a surprisingly easy listen for this shiksa. The music itself is quite interesting. So if you are looking for something a little different and blessedly Coldplay free, give Shir Appeal a try.

Not many collegiate groups can put together an album solid enough to scale a language barrier, but Tufts' Shir Appeal proves once again it has the stuff with Peal. Play. Win!. This is an album to check out.

Peal. Play. Win! exhibits the excellent sense of artistry and musicianship that I have come to expect from Shir Appeal. Tuning is great, but that's par for the course these days. What really sets the group apart is the great sense of blend. Even on Halleluyah (Psalm 146), a track ripe with moving diphthongs and ending sibilants, the blending is great (even if it is a little studio-aided). While some individual voices occasionally stick out of the texture (such as the guitar licks on M'flas Matzav HaRuach), and initial hits aren't always 100% in tune, the consistency is remarkable.

The phrasing is also fantastic — every singer, every line has a well-arced sense of growth and decay. It makes repetitive material like Lo Frayerim palatable, but transforms more nuanced songs like Ani Shelach and Le'an SheLo Telchi into something extraordinary. Shir Appeal's versatility also impressed me. Most tracks are mid-tempo jams that groove nicely, but the group aptly covers hard guitar riffs (The Only One), jazzy chords (Yemenite Medley), traditional singing (Halleluyah (Psalm 146), and up-tempo grooves (Shafut Shelach).

I found the production tasteful, taking advantage of the amenities of the digital studio while still letting the voices do much of the work. Some nice effects are sprinkled throughout. Percussion is also great, pushing the album forward without overpowering.

The weakest aspect of Peal. Play. Win! is the soloists, who are consistently mediocre to below average. Most soloists sound overly forward and nasal. At its best, the quality of the sound doesn't mesh with the backing. At its worst, it is annoying and petulant. Further, not all the tracks are keepers. Coming in at nearly an hour of music, there are a few throwaways, especially the dud Two at a Time, which is a real snoozer.

Nevertheless, Shir Appeal looks to have heeded its own advice with Peal. Play. Win!, producing a winning album. Peal. Play. Win! only further proves the maxim that good singing needs no translation, and this album should find approval from a wide audience.