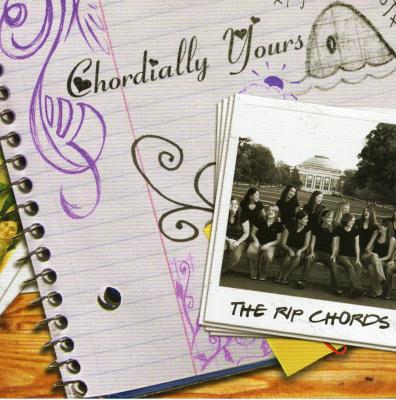 These ladies have very sweet voices and they sing very sweetly. Pitch and blend are not issues, but attitude and "oomph" are.

Pat Benatar would roll over in her grave (if she were dead) with the head voice sung Hit Me With Your Best Shot. Even Wilson Phillips' Hold On (remade famous by "Harold and Kumar Go To White Castle") could have had more attitude.

It seems that all the attitude in the group is locked up in Sarah Park, who gives her all — and more — on her solo, Nobody's Supposed To Be Here, but it's too bad that the background doesn't rise to meet her.

I have seen the Rip Chords live (albeit in 2003) and was very impressed. While this album does show strong musicality, the energy and personality I saw in their live show just isn't here.

The University of Illinois Rip Chords' Chordially Yours consists of ten solid songs, masterfully mixed by Bill Hare (tracks 1, 3, 5, 8, 9) and by Scott Malinowski (2, 4, 6, 7, 10). Other groups would do well to notice that a good album can be made of ten to twelve songs, most of them under four minutes.

The production is great throughout, each song falling into an appropriate place, as Bill's mixes tend to do. The drums hit hard but are still feminine and believable, if slightly too "samply" for my taste. The soloists are strong, especially Sarah Park and Becky Kim.

One of the great things about performing vocal music is that it is not all beat and lead vocal. We have an opportunity to sell the song through every part, top to bottom. Unfortunately, the Rip Chords wasted this opportunity, instead defaulting to easy block arranging and the same few syllables. "Doo", "doh", "bah"... there is very little, if any, potential for style, emotion, or phrasing in these sounds. The result: uninspiring, static songs.

The bridge of Nobody's Supposed To Be Here flops during an oddly placed break combined with boring, fully exposed syllables. The impressive solo rescues the song. Follow Through and Life Is A Highway simply fall too low in the female register. The solos lack the power of the original male leads.

Selecting safe songs for their album, the Rip Chords demonstrate a moderate command of the pop sphere. The sonic cohesion throughout is commendable, though ending nearly every song the same way — an isolated repetition of the hook, or a fade-out — might be taking the cohesion idea too far. Peer groups like Divisi, the Sirens, and Out of the Blue are choosing much more daring songs and really stretching the female a cappella comfort zone.

The Rip Chords have laid themselves a solid recording foundation. More audacious song choices and more stylized arrangements will kick the next album up to the next level.

There's no reason why I should have listened to Chordially Yours, the latest release from the Rip Chords, so much. After all, there's nothing extraordinary here. The album provides a few nice tracks, but nothing that would have anyone reaching uncontrollably for the repeat button. There's nothing particularly interesting about the arrangements, the productions, or the soloists. For some reason, though, I can hit the play button and coast through the ten songs relatively pain-free.

The Rip Chords have picked some good source material, from tunes with instantly recognizable opening bars (I Wanna Dance With Somebody, Life Is A Highway) to songs with great hooks (Follow Through, Hold On). Their execution is rather consistent, and it sounds like they're singing with a smile.

Chordially Yours may be far from flawless, but there's no grand fault to drag the album way down. A few solos are sub par, namely the trio speeding through Happy Face and the nearly inaudible effort on Life Is A Highway, but most soloists are well paired to their song. Sarah Park gives an especially convincing turn on Deborah Cox's Nobody's Supposed To Be Here. Occasionally the second altos can be offensively loud, as at the end of the chorus in Follow Through, but otherwise the Rip Chords blend nicely. Arrangements are ho-hum fare, "doo", "dim", and "wah" heavy, but never boring, and the frills of computer-enhanced production effects were left behind, but I don't miss them. The Rip Chords' mistakes are never so egregious as to hit you over the head. They may rear their faces once or twice, but don't do consistently enough to mar the album.

So I suppose therein lies the secret of Chordially Yours. The Rip Chords have tricked me into liking this album. Good for them.

To order this album, visit the group's website or Acatunes.com.