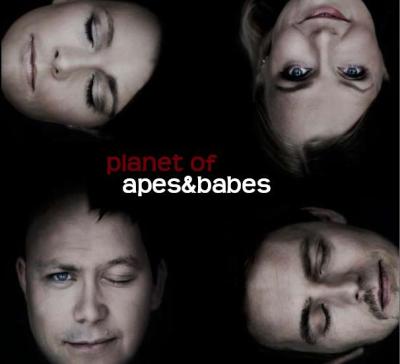 I was blown away by this record, caught utterly unawares after my initial reaction to its title and provenance. Oh, another cheesy Germanic European contemporary a cappella album, I thought to myself. Turns out it's a Norway-based world music tour de force.

The Scandinavian stuff is the best, as the women singers show off that fabulous Hebrides sound, which kind of sounds like a sunset balanced on one edge. Munnharpeslått fra Sunndal is a perfect presentation of this wonderful sound, dark and colorful and razorsharp, laid down here over bass and percussion in a Celt-rock arrangement of a traditional Norwegian tune. The album opening Villemann og Magnhild also sounds fantastic, even before you learn from the liner notes that it's a medieval ballad about trolls, heroes and love.

The Iranian tune, Tike Tike Kardi, is pretty great. It rocks out and sounds thoroughly modern. Nice contrast to the throwback tracks, Bei mir bist du schön (presented here in faux-vinyl and full studio sound) and Miserlou. The latter comes in both traditional and Dick Dale style, bringing inescapable Tarantino echoes to listeners of a certain age. I could have done without the Pulp Fiction treatment, which to me sounds too static, but it's an excellent performance and I'm sure it goes over well.

Further round the world now to Sheila Chandra, of India and the U.K., with a new trancehall arrangement of La Sagesse. Different, but I think it works. The choral Dolly Parton doesn't do as much for me — I would have preferred a more Carter family-esque treatment of Little Sparrow over the more modern setting presented here — but hey, this world is big enough for different tastes.

Overall, Planet of apes&babes is a land of wondrous singing, great intonation and professional polish. How kind of them to send a postcard to let the rest of us in on the secret.

Dictionary.com contains no fewer than ten definitions for "confounding", confirming that my sense that I was confounded by the Norwegian octet Apes&Babes, and their eponymous CD, was pretty spot-on.

"Confound" can mean "amaze", and Apes&Babes definitely amazed me with their choice of repertoire, veering as it does from traditional Norwegian lullaby, to Bulgarian folk music, to Iranian pop, to traditional tango to a Greek dance sung to Yiddish words.

"Confound" can also mean "perplex", which the arrangements of the aforementioned repertoire never ceased to do, and not usually in a good way. This is an ensemble with clearly talented singers and musicians, and yet you'd be hard-pressed to hear a depth and complexity of sound on most tracks that would suggest all eight are being used to their fullest potential. The group prides itself on experimentation and improvisation in its rehearsal and collective arrangement process which may feel satisfying creatively, but seems to yield somewhat undisciplined arrangements that provide only rare flashes of brilliance between the rather mundane ooh-ahh backgrounds and unison harmony leads that dominate.

"Confound" can mean "to throw into confusion or disorder", which Apes&Babes does quite literally by providing liner notes that do not follow the song order on the CD. Even more disappointing, the liner notes seem to offer a rich serving of background material for each song in Norwegian, but they've unfortunately been distilled into one or two lines of English, making me feel poorer for my listening experience. Translations for the mostly non-Engligh language material would also have been most welcome.

"Confound" also means "to damn", and confound it, I still somehow enjoyed this album. Though their palpable, almost electric energy sometimes shades their dynamics a bit too far toward fortississimo, it's an undeniable force that makes the music compelling even at its (too) loudest. The approaches to each arrangement are generally interesting even with they fail, and when they succeed — they seem to have a knack for soaring, seemingly dissonant yet hauntingly compatible countermelody lines in the background vocals — they can be thrilling.

As Norwegian a cappella goes, if The Real Group would be considered "accessible", then Apes&Babes might be called "alternative". Or perhaps even folk-y. It's not an album I'm likely to come back to anytime soon, but it's still one I'm glad con-found its way to me.

When Apes&Babes released Rå, RARB commended the group for its use of diverse musical styles and edgy, energetic performances. I must admit that I expected these attributes to carry over a bit more to Planet of apes&babes; what I found instead was a group that I liked largely in spite of their setlist and energy levels.

Apes&Babes is a Norwegian octet that prides itself on presenting songs "from a number of genres and ethnicities". Technically, this is true — the setlist is varied in terms of ethnicities and cultures — , but most of the songs are still traditional folksongs (with the notable exception being Dolly Parton). I didn't feel as though I was taking a journey across the full spectrum of musical flavors the way Rå supposedly would have.

But enough with the comparisons. Apes&Babes is still an impressively creative ensemble with solid singing, and this album aptly showcases their talent. The arrangements (which are generally composed by the group through improvisation) are wonderfully textured and interesting, even if the source material isn't always. La Cumparsita comes together beautifully as the group simulates an almost orchestral sound that crescendos into a satisfying climax. Bei mir bist du schön is also a blast to listen to, complete with several fun trumpet solos. Even though intonation isn't always perfect, it ends up making the recording sound even more impressive when you consider how often they are perfectly in tune sans pitch correction.

While the group does sound nice, I find too often that the sound is a bit too thin. The best small ensembles must find ways of making a big sound. I believe this group is getting there, but they don't always sound completely cohesive. The more together they are, the "bigger" the sound will become. This, coupled with the occasionally uninteresting song choices, didn't make me want to listen to this record over and over again.

Still, I really like Apes&Babes. They have a lot of charm and seem to possess considerable musicianship. If you're tired of standard collegiate a cappella, I'd definitely recommend picking this album up for a few listens through. You won't be playing Planet of apes&babes for months, but the quirky arrangements and earnest singing will justify your purchase and then some.

To order this album, visit the iTunes store, A-cappella.com, or the nearest Norwegian music store.