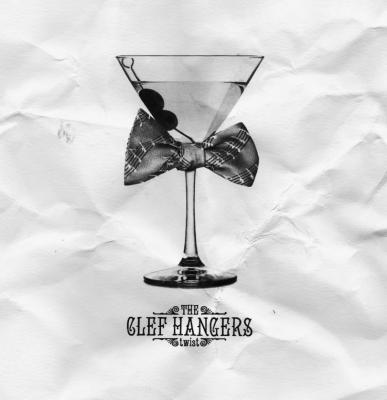 Twist starts with a burst of energy, launching Ain't Nothin' Wrong With That with a marvelous, sexy group grunt on the beat and promising action. The Clef Hangers follow through across eleven songs and a wide range of genres. Everything is shiny, upbeat and polished, and everything sounds good.

Nude is maybe my favorite track, along with the country numbers. Boondocks and the album opener are lightweight songs made fun, with a deep groove and good arrangements. The chorus layers on Boondocks are a nice treat, as is the sense of cohesion that the Clefs project. That sort of gel works best when there's something like a backbeat, and Let it Rock is another success at the other end of the set list and the genre spectrum.

Sandwiched in the middle is the Coldplay vibe, and it's less my thing. Beautiful Day is so smoothed out it sounds like a Coldplay song, and a wimpier one than Viva La Vida a few tracks later. The pair fit stylistically with the 80s-infused middle two tunes. It's true that neither Ordinary World nor Thnks Fr Th Mmrs dates from the actual 80s, but the former is a Duran Duran song and the latter is sung here — and beautifully so — as if channeling Peter Cetera. Also, just because they can, the Clefs remember to include a couple of tracks without percussion, including Autumn Leaves and the lovely and simple (if complexly produced) Lullaby.

The only song I really disliked was Kiss Kiss. It's kind of a limp nothing of a song to begin with, but I might have been able to get past this were it not for the urban radio chatter that clutters up the intro. I will not try here to reproduce the dialogue between Anoop Desai and his voice-of-blackness interlocutor. I will only say that it explains a lot about how a hot singer dude can actively want to sing a Monique song on international television. Needless to say, I think the guy needs a new set of ideas.

Tangents aside, Twist is a great set of performances. The Clefs can, and should, be proud of their work.

I'm starting to feel like a bit of a broken record when it comes the UNC Clef Hangers. Another two years have passed and once again, another fantastic sounding album has arrived on my doorstep featuring covers that are remarkable for their slick production, energetic solos, and remarkable resemblance to their source material, while simultaneously leaving me feeling a bit empty and unsatisfied.

To the uninitiated a cappella listener, there can be no question: this album is hot. Indeed, even with my issues (see below) set aside, the first five tracks show off a breadth of ability that should surely be the envy of most other collegiate groups. Whether it's the technological wizardry of Ain't Nothin' Wrong With That (somewhat reminiscent of Transit's version of Home) and Kiss Kiss, the varying dynamics and vowel sounds of Nude, the layering in the background of Boondocks, or the naked beauty of Autumn Leaves, there really isn't much these guys can't do.

OK, so why does it sound like I'm heading for a "but". Well, as good as they are, some of the same issues that I had with Facing Clarence and Time Out — both while giving them 5s almost straight across the board — abound here too and it's no less bothersome the third time around.

Most notably, the vocal percussion is super-human. I'm not just talking sampled, but truly, in songs like Kiss Kiss, beyond human performance capability. Maybe I should just let it go as it's been a staple of a cappella studio recording for a while now. Maybe I'm just an old fogey. But sorry, I can't. I've come to grips with the finished sound bearing little to no resemblance to the sound that emanated from the human mouth. But at least in the collegiate pop/rock cover business, when the entirety of the drum pattern is something almost surely unreproduceable by a human being at all, I'm left to question if a cappella becomes a bit of a misnomer. Heck, I was hard-pressed to hear ANY parts of Let it Rock that weren't simply fragments looped ad nauseam and were actually performed by human beings from the beginning to the end of the song.

The second issue develops from the VP issue and that is the tendency to have an octavized bass and hyper-kinetic VP substitute for fully-fleshed out arrangements. Now to be fair, there are numerous tracks on this album where the group achieves a nice balance between the two: the aforementioned Nude and Boondocks, as well as Ordinary World (which probably features the last recorded collegiate solo by American Idol finalist Anoop Desai, and a lovely one at that). And there are tracks like Autumn Leaves and Lullaby where the group demonstrates that it can handle straight "acoustic" ensemble singing — not always interestingly arranged, but very capably performed. But really listen to Thnks Fr Th Mmrs and you'll wonder where the arrangement is. The drum pattern and bass so overwhelm everything besides the solo in Beautiful Day (perhaps not surprising for a U2 cover) that if there is something interesting going on in the background besides block chord wailing, I could barely make it out. And as I've already mentioned, songs like Kiss Kiss and Let it Rock feel much more "assembled" than sung — a collection of riffs and fragments, processed, sequenced, looped and repeated over and over.

And so once again, the Clefs have delivered and fallen short for me. Chances are, you'll love this album and I'm just clinging to some arcane notion of what a cappella should be. But when it feels like there's almost as much, if not more, art on display at the studio console as there is at the microphone, I can't help but be just a little bit underwhelmed.

This review does not need to be 200 words. The Clef Hangers' Twist is completely awesome. You should stop reading this and buy it right now. But do come back. Did you buy it? Good. Now you can finish the review.

The opening track, Ain't Nothin' Wrong With That, already garnered a 2009 CARA for Best Song with its appearance on Sing V: Groovus. Wholly deserved: this is one of those songs that makes you want to dance in the streets while clapping your hands.

Next comes Kiss Kiss, which features the beloved Anoop-Dawg. Cut out the talky radio interview introduction, and I do not see why the Clefs would not try to get some mainstream radio play out of this one.

With Nude, a gorgeous and soaring arrangement is executed perfectly and the soloist is worthy to attempt Thom Yorke. Then these southern boys do some country with Boondocks, a toe-tapping number with tight harmonies and excellent blend.

The guys then take it down a notch with the elegant and simple Autumn Leaves. Soloist Brandon Jackson Baird proves that he is more than just a great arranger.

Solid tracks follow, including another Anoop solo on Ordinary World. Neither of his solos reaches She Has No Time heights, but it is still Anoop. Here is where I note that in my last review of the Clefs, I suggested Anoop might represent the a cappella world on Idol.

The poignant and lovely Lullaby is dedicated to the memory of Eve Marie Carson. The Clefs then close it out with a produced up the wazoo Let it Rock, which does just that. In trying to figure out if "buttons drop" was some kind of slang, I learned that the Clefs took the R-rated rap section down to PG-13. Not just with the replacement of "buttons" for "panties", but also with the replacement of some F-bombs with "twist". Clever incorporation of the album title, guys.

My mini nitpicks are the lackluster (only by comparison) arrangements for Beautiful Day and Viva La Vida, and the decision to cover Fallout Boy. Ugh.

But in the end, Twist is a rare star in the collegiate a cappella firmament. Love it.