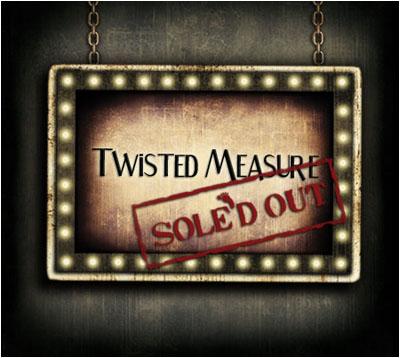 Twisted Measure's Sole'd Out has a raw energy that raises it a notch above the emotionally sterile, technologically digested pap that so many groups put out. This I appreciate. Unfortunately, the raw energy comes at the expense of some of the precision, blend, and tuning that comes with Pro Tools smoothing.

This is most evident during about half the solos. On Baby Baby Baby and Nothin' Better To Do, the soloists slide around and sometimes do not reach the right notes. On Say (All I Need) and I Won't Disagree, the soloists reach for the belted high notes. In Time Is Running Out, the soloist is just ahead of the beat through much of the song and is just trying a bit too hard to rock. However, when these soloists are on point, they are quite good. Give them a few more takes next time!

The remaining tracks have excellent soloists with great interpretations and solid performances ... with the exception of the lackluster Falling Slowly. Poor Falling Slowly. This plodding song is the only one without TM's high energy and this is due in part to the arrangement and in part to the shaky bass/wispy soprano duet. Perhaps this is why they hid it in the sixth slot of a twelve-song album.

TM also needs to tone down the shrillness of the women, which pops out of the background in places throughout the album, most obviously in the opening strains of Ain't Nothin' Wrong With That.

A brief digression: In the pageant world, contestants are told to avoid doing songs by Barbra Streisand. "No matter how good you think your voice is, the judges will be comparing you to Babs." I would like to apply this to the a cappella world. Since most of what the college world does is covers, there are sometimes versions of certain songs that are the "Babs". I posit that the UNC Clefhanger's version of Ain't Nothin' Wrong With That is the "Babs". And Elon is in the same state so I don't think they can plead ignorance.

Lastly, I rarely comment on cover art, but member Andrew Kay's work is elegant and professional. I really like the cardboard foldout liner notes as opposed to the removable booklet. I do wish that the list of members were in an order related to the group picture above it. It is nice to put a face with the voice.

The last Twisted Measure release, psychoacoustic, rubbed me the wrong way with its heavy bass and loud drums. This release, Sole'd Out, is pleasantly a notch more subdued in both respects. Unfortunately, a couple of different issues still rub me the wrong way; here, the problems are mainly the production and soloists.

Let me first discuss the soloists. The first three tracks are indicative of the spectrum of soloists present throughout the album. Soloists range from shouty on Ain't Nothin' Wrong With That, to shrill on Baby Baby Baby, to pleasant on Say (All I Need). Unfortunately, though, the majority of the tracks on the album have what I consider a substandard soloist. I don't want to pick on the poorer soloists, so I'll just give a "shout out" to the better ones: Ben Kaufman on Say (All I Need), already mentioned, gives a passionate performance with a nice pure tone, able to switch fairly nicely into falsetto and back: Emily Mooney on Cold Shoulder manages a quirky tone, but with a nice voice quality that I liked even a bit more than the Adele original; and Andrew Kay on I'm Yours also has a good voice quality and does a good job of bringing out some of the feel-good, easy-going feeling of the Jason Mraz original.

The arrangements seem typical of college groups, with nothing really that gets me excited. In fact, the arrangement of Say (All I Need) was very similar to other versions I've heard, though Twisted Measure group member John Fiander is listed as the arranger. The only song that broke this mold was Nothin' Better To Do, also arranged by Fiander, where the song begins with a bouncy bass & tenor line "wha dih doh oh" into which a soloist enters. The bouncy feel is kept up throughout the song, although the melody gets a bit repetitive towards the end. Fiander and fellow group member Kelly Wardle combine for all but one of the arrangements on the album.

Production problems are a big factor in my assessment of the album. The whole album feels harsh. This was most evident when I listened to recordings of Say (All I Need) by the Counterpoints and the Virginia Sil'hooettes directly after the Twisted Measure version. Twisted Measure seems raspy and muddy in comparison to the shining vocals of both the other groups. I was enraptured listening to their versions but I had no difficulty pausing the Twisted Measure version. The harsh, raspy, sound pervades the album and is probably the largest reason I gave the album a substandard "repeat listenability" rating. A few other production problems are noticeable, for example a weird artifact on the soloist's highest notes in Say (All I Need) at 0:48, and a place in I'm Yours (3:03) where it seems like the producer has used auto-tuning to create a trill between notes in the melody. After I wrote this paragraph, I consulted the liner notes to see who the producer was, and I was unsurprised to find out that the group (led by John Fiander) had produced their own album. I think that was a mistake.

Two other miscellaneous perplexing issues: Ain't Nothin' Wrong With That begins with a live introduction, "Ladies and Gentlemen, Twisted Measure!" but then cuts to a studio track after the "One, two, three, four", very abruptly losing all live sounds. Why include the live introduction at all? And on I'm Yours, why sing "hesatate" and "complacate" instead of "hesitate" and "complicate"? Granted the original performer Jason Mraz pronounces the words that way, too, but it still seems odd to me.

In summary, Sole'd Out is a fairly typical college album. Fans of the group will like it; those who are not fans will not become fans by listening to this album. If I can give one recommendation for the group for its next album, it would be to find an established a cappella producer to work with. That would likely result in an album I'd listen to over and over again. I sincerely believe that with just a little improvement in that area, and with just a few more consistent soloists, Twisted Measure could jump into the upper echelon of college groups.

Lyrics advisory: The World Should Revolve Around Me contains the "s-word".

If you've been keeping up with the world of collegiate a cappella, you may have noticed that groups are becoming more progressive and innovative with their arrangements, song choices, and performances. They're starting to realize that, as more advanced production techniques are introduced, more and more groups are putting out shiny, bright, technically perfect albums. Because of this, lots of albums start to sound the same. Nowadays, the way to stand out isn't only through solid musicianship, but also through creativity and originality. The bar has been raised, and it's climbing higher all the time.

Twisted Measure's Sole'd Out might have been a highly acclaimed album ten years ago. After all, nothing's really bad here; songs are mostly in tune, soloists are decent, and arrangements are functional. Problem is, "mostly in tune", "decent", and "functional" are not phrases you want to see in a RARB review these days. There are already so many a cappella covers of Muse, Jason Mraz, and One Republic out there that it would take some serious craftsmanship to pull another one off that stands out. Maybe the mediocrity of the album is a fault of Twisted Measure, or maybe it's just the nature of the recorded a cappella "market". Either way, it's a reality that one cannot ignore.

Most performances are adequate. Nothin' Better To Do is one of the better tracks, led by Kaity Shaw's heartfelt solo performance. The energy of the group is also contagious in this particular instance, which makes the experience much more enjoyable. While the intensity doesn't ever really suffer terribly on this album, some of the songs could have benefited by a bit more of this enthusiasm.

Unfortunately, there just isn't enough on this album for me to recommend it. Arrangements are often bare, dull, or repetitive, and this is worsened by the fact that "den"s and "jun"s are aggressively thrown in your face in several instances (notably during Falling Slowly and Knew It All). The other issue is that the balance is often way off across sections. Sometimes, the solos are way too hot in the mix, and often the middle sections (baritone, tenor II) are barely audible. This makes arrangements sound thin and incomplete. Blend is also a problem — spread vowels and mismatched tones are rampant across the tracks. And finally, there are several times when individual voices stick out and ruin the moment. The intro of Ain't Nothin' Wrong With That suffers from some pitch discrepancies, and the beginning of Cold Shoulder features one high soprano using no vibrato and the other slathering it on. Yikes.

Twisted Measure needs to focus on bringing something different to the table if they want to stand out, especially since they suffer from some basic musicality issues already. It may sound harsh, but this body of work just doesn't have the chops to hang with some of the other a cappella records on the market.