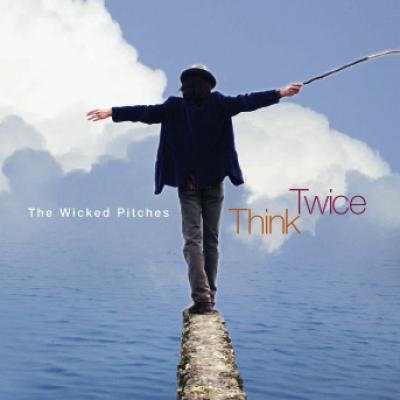 The Wicked Pitches have delivered a baffling disc of vocal jazz with their recording Think Twice. Baffling, because some parts of the disc are so good that I can't stand it, and some parts I can't stand because they are so unnervingly mediocre.

The background singing on all of the tracks is sublime. This is some of the best choral singing that I've heard in a long time. The intonation and blend throughout the sextet's vocal range is spot on: crystalline soprano lines are held aloft by buttery mezzo and alto tones while the tenors and baritones provide a healthy dash of testosterone into the lush chords that flow over rhythmic bass lines.

Seriously, The Wicked Pitches are reminiscent of one of my favorites groups from yesteryear called Beachfront Property. Same group-style arrangements that highlight the technical proficiency of the members without making the tracks sound too complicated or unapproachable by the average singer. Novices can actually sing along to these tracks and learn a lot about vocal arrangements and part writing. And just like Beachfront Property, there are some swinging tempos that make you smile and tap your feet at the same time. Each track is topped off with a nice cheery overlay of choral gooeyness when necessary. Scarborough Fair is currently ruling the roost as my favorite track of the year! It is that good.

So what's the problem?

I really hate saying this, but the solos on most of the tracks are less than stellar. And the scatting is often pedestrian at best. There is a section of Bluesette where it sounds like they are trying to channel Michael Bublé by scatting his name. It's not helping the track become any better.

The guys bring the quality of the album down several notches. Ticket to Ride and Bluesette suffer the most. While there is a distinct earnestness behind Phil Webster's attempt on The Beatles classic, the delivery comes across as more comedic than crooned. The women are stronger, though their timbres have some failing points as well. By now, I'm sure most of you know that Summertime is my favorite song of all times. Well, Debbie Gruber does an admirable job in her performance. There were some nuances that I think she missed, but overall I'm glad they recorded the song.

And since liking a soloist's voice is the single most subject aspect to reviewing a recording, I waffled at the actual score to give the overall album. For the background alone, I almost gave the album a "5", but the solos really bummed me out. If you are a superfan of vocal jazz (and not overly critical of solo voices), you'll love this Boston-based sextet's recording. You really won't have to Think Twice about picking up this album from The Wicked Pitches.

P.S. just one parting jab, no one outside of a freshman collegiate choir should still be singing or recording Shenandoah. This version is especially painful with wide intonation in the top parts and poor phrasing of dramatic lines throughout. I'm tending to disregard it even actually being on the album. It is dead to me.

The Wicked Pitches album Think Twice is a journey down a cappella's Memory Lane. There are moments during listening where I fondly thought about The Bobs, The Real Group, and Toxic Audio. The vocal line-up is similar (3 guys, 3 gals), a tight, old-school vocal sound with a jazz foundation, and the performers are all about the same age group.

This is good and bad. Good because the musicianship is right up there with these groups, including all the bright vowels, locked chords, and a laid-back sophistication of an adult group who knows they don't have to sing current pop hits to get your attention. Bad because, while The Wicked Pitches hold similarities to these groups, they don't carve out their own niche. They don't have the zaniness and hilarious humor you know you'll get with The Bobs. Their jazz singing, while above the average jazz group, is nowhere near The Real Group. And back-flipping vocal percussionist, making their listeners belly-laugh to a Britney Spears cover, while utilizing props to their fullest extent they are not (see Toxic Audio).

The Wicked Pitches need to carve out their niche. Everything is nice, but nice doesn't bring an audience back wanting more every time (live or for a recording). Heck, even the Michigan-based quartet Three Men and a Tenor can make you laugh before you even hear them (the tenor is half the height of the rest of the guys). Semi-pro and pro groups must develop an identity to succeed. The Wicked Pitches don't have one. If they were banking on quality of sound alone, they missed the target.

That said, this album sounds better than most I receive. Since we get more college albums than anything else here at RARB, I'll use college groups as a basis of comparison. The Wicked Pitches have better musicianship than almost all college groups I hear, and their soloists (while not all rock solid) have the maturity to understand they don't have to mimic the soloists note-for-note like college singers do again and again and ... you get the idea. Ticket to Ride is cringe-worthy if you're a Beatles fanatic, but I like the soloist and the arranger's willingness to step out on a limb and perform a fresh take on the chart. The Wicked Pitches could use this times a hundred on the rest of the album. Arrangements are far more imaginative than college groups, utilizing their singers wisely and usually singing in five parts. All Blues is a nice ride on a repetitive bass groove with nice scatting over the top. They sound better than college groups, but are missing the "it factor" that successful pro groups have.

Production is natural which fits the style pro groups they seem to be emulating. Vocal percussion falls in line with a Bobs simplicity. And yet, I'm bored out of my mind listening to Think Twice.

They are missing the intangibles that makes an album worth listening to over and over again. Go for funny or zany, go for better jazz arrangements, or go for something completely new and different. The Wicked Pitches are good musicians, but need to carve out their niche in the a cappella market before I can recommend their work to listeners who have heard other groups do this better.

The Wicked Pitches are a Boston-based coed sextet which has released its first CD after sixteen (!) years. It's certainly been worth the wait: the songs and arrangements on Think Twice have been honed, and perfected to the point that they sound completely effortless.

That effortless feel is nothing to sneeze at on a CD with this much scat; every vocal line and rhythm falls into place as if it's second nature. I never thought that I'd enjoy an all-instrumental a cappella track, and yet the over-five-minute-long All Blues was so compelling that I didn't even notice that there wasn't a vocal solo until it was done. There's surely an intricate arrangement behind the performance, but these singers made it sound fresh and relaxed — even improvised in parts — and never over-rehearsed.

Another highlight of Think Twice is soprano Lauren Wool; the super-high notes on Scarborough Fair are bell-like in their clarity and not at all shrill. The uncredited female voice that solos at the beginning of Shenandoah is lovely as well (it's neat to hear that song in a treble register!), as is the outstanding duet between Debbie Gruber's scat and Phil Webster's vocal trumpet at the end of Summertime.

My only criticism of Think Twice lies with the vocal percussion, which sounds mixed a little too high on some speakers, and too often sounds like syllables rather than percussive sounds, which can get distracting (on Scarborough Fair and Bluesette especially).

The Wicked Pitches have settled on a style and a set of songs that really suit its individual voices. If you enjoy songs with a jazz flare and a lot of scat, then Think Twice is for you.