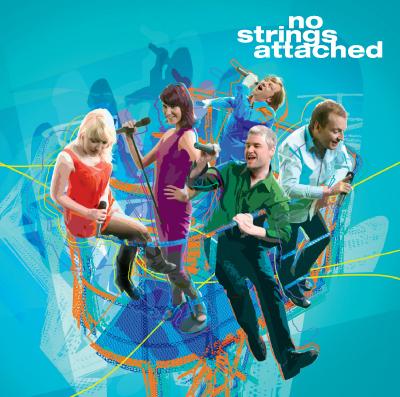 This debut album by No Strings Attached treads a fine line. The German quintet has recorded an album that tried to capture the "live" essence of the group — a recording that replicates what they are able to do on stage, in concert. That's always a tough challenge to accomplish.

As has been stated before, the ear is very forgiving in concert when there is so much more to experience from the overall performance. Not so when we're only given the pleasure of hearing the recording on its own merits. Unfortunately, No Strings Attached fails to deliver a captivatingly consistent album under these circumstances. Sometimes they soar as they do with the creativity of Toxic, the energy of Livin' La Vida Loca, and the zaniness that is Played A-Live Bongo Song. But generally they suffer from all of the foibles that can happen during a live performance: tuning fluctuations, balance issues, and solos that are carried mostly by personality rather than exceptional talent.

No Strings Attached is a good party band. Most of the tracks are engaging and sung with a bit of panache that makes it apparent that in concert the music makes a lot of magic. But when these songs escape the cocoon of a concert and blast forth from my stereo, all of the flaws are magnified and exposed. Soloists struggle to create a rich, textured line. The background lines aren't necessarily out of tune — more like poorly intonated — and tend to lose a lot of their robustness and sense of precision as the tracks continue. Though Rüssel an Schwanz seems like it was written to be atonal at the beginning, the middle sections gel in a completely different way than the rest of the song. It's a little jarring upon first listen. But then you think that it's an artistic choice. Much like the bad choice to end the album with such a depressing rendition of Hallelujah. I have no words.

The engineering doesn't help the situation. On This Love, for example, non-essential background syllables in Tini Peeck's upper soprano are mixed at the same volume level as her vocal line harmony. I mean "doot, doot, doot, doot" shouldn't really compete and win against "This love has taken a toll on me". I would fault the arrangement for creating the imbalance, but I really like the simplistic nature of the track. And it isn't necessarily any group member's musicality skills, because I'm sure the line dovetails nicely into the lyric when performed live.

The versatility of the group is one of their greatest strengths. Michael Kistenmacher and Christoph Drosser alternate bass duties depending on the tracks. The pair of them meld seamlessly with Philipp Mott's drumming to form a nearly flawless rhythm section regardless of the genre of the song. It's evident that the guys have worked tirelessly to create a solid foundation for the band; the pocket is there on every track even when the notes aren't quite.

The women are the better soloists in the quintet, with Marzia Plichta's lusty alto making the slowed down and sexed up version of Toxic one of my favorite tracks of the year. It is disturbingly out of tune at times, but think of it as '09's version of Creep from Sing 2. Peeck's Baby Love finds a groove that harkens back to an 80s dance heyday and extols the excess that riveted the party scene during that decadent decade.

The guys don't fair as well. Hey Ya! is kind of a mess. And the end track Hallelujah is a total mess. Kistenmacher's turn on This Love is the saving grace for the male contingent.

I was irked by the gender and lyrical change of Livin' La Vida Loca. The song would have maintained its frenetic and seductive appeal had the object of description still been a woman (or in truth it could have been a guy) whose lips were "devil red", instead of a guy whose eyes were "steely blue". Steely blue? What?

Believe it or not, I'm going to recommend that every music director of an a cappella group where the members scream that they want to record a disc that sounds just like the group does live get this album, so that you can have proof of why that's not a great idea.

Don't confuse No Strings Attached with the college groups from Emory or Illinois. This group (which I will call "NSA") from Hamburg, Germany has been around since 1999. They are "five voices, one band", according to their website tagline — although "4 voices + 1 vocal percussionist = 1 band" might have been a better line since all of the songs on their self-titled album are SATB + VP. Another blurb on their website says: "This is not the a cappella from your college days - this is highly produced, energetic and a modern interpretation of a cappella." While the group's energy is impossible to miss, I'm afraid I have to take exception with the other three descriptors: the group doesn't sound any better than typical college groups, there is very little noticeable production, and you would only consider the album modern if you haven't listened to any contemporary a cappella for the last ten years.

NSA has more of a jazz than a pop or rock style, and reminds me the most of two other European a cappella groups: The Swingle Singers and The Real Group. Unfortunately for NSA, they fall considerably short in comparison. NSA's biggest deficiency is in their tuning: there are pitch problems on nearly every song. The men have the most troubles in this regard. The bass, while often doing interesting things with running and bouncing lines, is often just a shade off. And aside from Hey Ya!, most of the time when the men solo it's a disaster.

The problems are glaring enough that I feel many of the tracks should have been re-recorded, or at the very least had the pitch errors auto-tuned after the fact. The whole production is very minimal, though, sounding like they recorded all of the songs in one or two takes, stopping when they got a passing grade. This is perhaps a symptom of the group producing their own album (although a co-producer is listed, Christian Mevs). The lack of production is noticeable in a few other areas, such as the grating sound of the background "bemp bemp, ba dah da-dat dah" at the start of Livin' La Vida Loca. Might be fun in a live show, but doesn't sound good on an album.

On a more positive note, Marzia Plichta has some nice solos in Toxic, Whatever Lola Wants, and Das kann doch nicht dein Ernst sein, the last one being a German translation of I Heard It Through the Grapevine, which does a good job of preserving the "I can't believe I'm being dumped" feel of the original while not sticking to a literal translation. Marzia should be featured more in the future. Some of the (unprocessed) vocal effects do sound cool, like one of the men doing a disco-style plucked electric guitar in Baby Love. The group's English is excellent, flawless except for a single word ("clothe" instead of "clothes" in Livin' La Vida Loca). The highlight of the album is unquestionably Played A-Live Bongo Song, which is mostly a showcase for the vocal percussionist Phillipp Mott. The bass joins in early on, and later other voices come in with tones, not words. The whole effect reminded me of dance music from the 1980s, and in fact I think it may use the same chord progression as New Order's True Faith. It's a lot of fun to listen to.

To summarize, normally when I listen to a cappella albums for review I like the album more and more with each successive listen. The opposite happened for me in this case. The initial vibrancy which had charmed me faded in my memory and the many flaws stepped to the forefront. As a consequence, even though it is fun and energetic, I really cannot recommend this album.

No Strings Attached is a German quintet that won't fool you into thinking it's larger than five members. Their debut album is not enhanced to sound like a group twice their size and it's not obviously pitch-corrected. This sound is a deliberate choice for the group, according to the letter that accompanied the disc that I received, which reads in part, "We didn't like the idea of using too many tracks and effects that couldn't be reproduced on stage."

This sonic choice could be either a plus or a minus, depending on your expectations for vocal recordings. If you've grown accustomed to the slick sound of much of contemporary a cappella, then you'll be disappointed by the lack of frills on No Strings Attached. If, however, you are not likely to find yourself in Hamburg to catch this group in concert, then the album does a convincing job of capturing how their live show must surely be.

Unfortunately, some of the group's song selections just don't lend themselves to this production choice. The original Whole Lotta Love oozes with power and swagger, neither of which this group achieves in its cover. The verses of Rüssel an Schwanz sound jumpy and out of sync (although the choruses come together nicely). Hey Ya! and This Love, however, would both make enjoyable live performances. They're not perfect, but there's plenty of energy here, which is more than half the battle for a group on stage.

Sometimes the album's sparseness really works for the group. The saucy Whatever Lola Wants reminds me a lot of The Bobs, a group which truly knows how to use its small membership as an advantage. Whatever Lola Wants succeeds mostly because the minimal arrangement matches the limited vocals; you don't notice how few voices there are in the background because soloist Marzia Plichta is so captivating. She is equally great on Toxic, which is a terrific arrangement that turns Britney Spears' slinky club rhythm into a sultry, yearning torch song. It's nearly unrecognizable, in a really good way; you might think it'd be impossible to shake the image of Britney in her Alias-style video, but this version of the song does just that and is a truly memorable arrangement

No Strings Attached might not match the expectations of today's a cappella recordings, but there are some great arrangements here that show off the group's stylistic point of view and creativity. The group just needs to learn how to make these sonic choices consistently across the entire album, even if it means picking different songs that lend themselves better to the group's size.