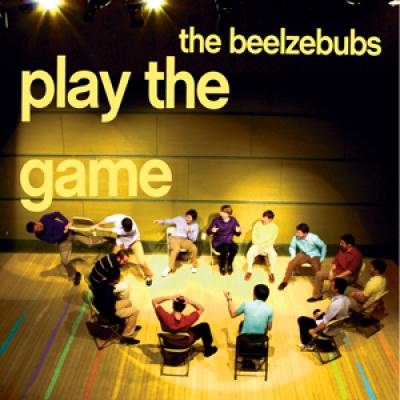 Play The Game gives you pretty good odds. Heads you win, tails you get a good song anyway. The Beelzebubs' latest is polished, and dare I say professional, without losing its collegiate sensibility. It opens up with a '70s hipster vibe that gives way to more interesting fare, and pretty much everything along the way is worth at least one listen.

Don't Think Twice, It's All Right is my personal highlight of the disc. Ed Boyer and Nick Lamm's arrangement is delightful and surprising, not to mention beautiful. In general, I was surprised at how much I liked the slow songs on this album, given my general preference for uptunes and a good danceable groove. Goodbye Cruel World provided this year's Pink Floyd fix, a staple component of any new Bubs recording, and it's also a lovely performance. Go or Go Ahead also won me over, resisting its potential to turn whiny.

Danceable is good too, though. Hands down, Vehicle is the best of this bunch. "Great God in heaven you know I love ya" — yeah. Rebel Yell is the other standout here, adding new life to a song I have long considered one of the most tired '80s exports. After that, I suppose it's a matter of taste. Typical is a pretty typical, and therefore relatively unengaging number, ably performed, and Party All The Time is a good take on a song I never thought I'd hear again and never thought I'd miss. Found a little life in it yet, did you, eh guys?

So it's a good album in a good year and a good time all around. If this is your thing, it'll be your thing. You can play the game risk-free.

Groups like the Tufts Beelzebubs have an unfair advantage.

Wait, wait, wait a second. I'm not referring to their decades-worth of talented alumni who support the group, contributing musical material as well as performing opportunities and/or financial contributions that make it possible for the group to record an album every two years. I'm not referring to their '04 alum Ed Boyer whose genius — and I use that word sincerely — in the studio has shaped (or perhaps defined) their recorded sound over the last several rcordings. I'm not even referring to the fact that they seem to consistently get the best talent the Tufts student body has to offer.

No. What I'm talking about is the cumulative effect of all of the above. That having listened to the group for nearly twenty years (one of my first a cappella recordings was their 1991 release Foster Street), the ‘bubs are one of the few groups that I expect to be flawless. Whereas a group previously unknown to me, or a group with a mixed past history might begin around a "3" and earn its way to a "4" or a "5", you pretty much can count on the ‘bubs delivering a "5"-worthy recording and to some extent, it's theirs to lose as I listen to the album.

With that said, Play The Game is not flawless, but it's still a "5". Miles ahead of the bulk of its competition and rivaling most professional groups, the quibbles to be found here almost seem petty. Sure, Dog Problems is an odd choice and its quasi- Dixieland/barbershop-infused style filtered thru a prism of The Beatles then strained thru a colander of Queen is a little jarring. But even in its quirky simplicity, it's interesting and well-rendered. The fact that the group decided to tackle Party All The Time is more entertaining than how they chose to tackle it — but it's a spot-on cover nonetheless. The dynamics in Debra are a tad on the loud side and yes, the shrieking head voice solo becomes shrill before long, but how often have you heard anyone cover this song? And so well to boot?

If that's about as much as I can say about the lesser tracks on this album, you can only imagine how highly I think of the better tracks. Suffice it to say that from the very first track, you realize you're in the presence of artistic greatness on all creative fronts. Typical features killer crisp VP that never loses its humanity, the build in the arrangement thru the first verse to the first chorus is thrilling, and the classic Boyer layering of syllables and sounds upon on another is used to phenomenal effect. Ditto for Who Are You (arranged by Boyer) where even in the midst of all the guitar processing, you never lose the teeth and lips that generate the driving hi-hat rhythm behind the title words. And just for good measure, Boyer gives the group the unbelievably gorgeous Don't Think Twice, It's All Right — as unadorned an arrangement as one could hope for and yet no less exquisite.

But if I am to single out one track on Play The Game, it must be Vehicle, a track I would nominate and/or vote a CARA for right now. OK, so I have particular penchant for funk and vocal jazz and this track blends them both seamlessly. But this is one of those ten or so tracks you bring out and play for your friends when you want to show them why, even fifteen years out of college, you're still into the collegiate a cappella world. I could comment on how the track reminds me of how I felt when I heard Cadence's I Wish from Frost-Free for the first time. I could point out the energy that can't help but come bursting through my speakers. I could comment on the breakdown bridge section and the mix of percussion and vocal "horns" that build back into the final chorus. But I wouldn't do it justice. Just listen to it and I defy you to not tap your foot, bob your head or want to get up and dance. 2:26 of pure pleasure.

As much as I think of the ‘bubs, there have been albums of theirs in the past that you could do without. Suffice it to say, this ain't one of them. Buy. It. Now. Period.

The Tufts Beelzebubs is a group that has been known, historically, for raising the bar in collegiate a cappella. Play The Game is not a step change for the group, but it's still an exceptionally good album. All the things at which you expect the Bubs to excel — tuning, blend, arrangements — are here in spades, and this is far from the work of a group just resting on the laurels of their previous achievements.

The group's song selection is, as usual, exceptional and distinctive. Sure, you've probably heard a couple of these tunes done a cappella before, but the Bubs steer clear of tired, overdone a cappella covers. I hope to never hear a song by The Fray or Coldplay on a Bubs album, and the closest they get to hackneyed territory here is with a Ben Folds song. But their version of Cologne is so layered and textured that it reaches far above the average. This is an arrangement that is driven forward both by its voicing and by its dynamics. For most of the song, the backing parts are chord-based, but they change in ripples rather than all parts at once, which creates a great effect.

There's a fantastic cover of Bob Dylan's Don't Think Twice, It's All Right, which turns Dylan's sputtering heartbreak into a crooning, devastating lullaby. The Bubs use subtle syllable variations and smooth dynamic transitions to keep it from sounding too repetitive — not easy to do on a ballad with four identical verses and no chorus. The introductory notes and backing parts on Beck's Debra shimmer like a hallucinogenic dream, and the falsetto lead just wails overhead. Even the six and a half minute long Go or Go Ahead keeps my attention on repeated listens: it builds nicely for the first four minutes, then relaxes a bit, and then grows to an even more impressive climax.

And, of course, the Bubs attack more upbeat songs with gusto. The rollicking Vehicle just plows over anything in its path; a lesser group would've just let the energy of the song propel it forward, but the Bubs build energy in the power of their arrangement. They layer melodies effortlessly beneath those showy horns and the fervent solo. Even during the song's breakdown, rather than relying on simple repetitive chords, the Bubs keep the arrangement intricate, just quieter and more intense (and that percussion line, filled with pops and heavy breaths, just works).

This is a terrific album, but it's not perfect because the tracking of the album is off. Their choice to alternate between upbeat and mellow songs makes the album feel jumpy; I wish they had stayed in a groove for a couple of songs instead of bouncing back and forth. (This issue is, of course, easily corrected in the digital age: just move the songs around in a more logical fashion on your MP3 player of choice.)

Since I so often criticize groups for mis-crediting songs in their liner notes, it's only right that I commend the Bubs for a job well-done here: every song is credited with its original performer as well as its songwriter and publishing company. This is a group that obviously does its homework and never coasts. Vocally, the dynamic range here is the group's strong suit. These singers can focus down to a whisper and then swell into a roar, effortlessly, all in the same song. It's a skill I wish more groups would master, and the Bubs' ability to have such precision and consistency over time is commendable, especially in the collegiate world where a group's membership turns over completely every four years by definition. Even with newer members, Play The Game still has the same great Bubs sound.