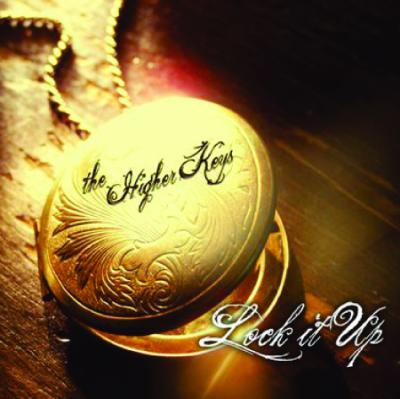 Lock it Up appeals to my biases. I can't remember the last time I got a swingy jazzy college record. And the Higher Keys open with something akin to hot jazz! It's got a good beat and you can dance to it. Let's jive.

Black Coffee? Fly Me to the Moon? Yay. Even the Beatles Medley has some swing to it. I am deeply suspicious of The Beatles, except in snippets and/or cover songs that emphasize the groove. The Higher Keys offer both. I like Drew Nobile's tastes — he tries to do his own thing with this music, without throwing the originals to the wind. The medley is one of, by my count, six Drew Nobile arrangements on this album. He gives I Can't Make You Love Me a sense of progression, its Plain Jane intro followed by building chords and a few a cappella-group touches (you read RARB, you know what I mean), and eventually, Mike Kadim's techno-style percussion lines. Sure, it's not a flawlessly tuned performance. It's got heart and a sense of purpose, and I'll take it.

Speaking of good moods, the intro to Too Darn Hot is irresistible. I think Aaron Stanton's arrangement is wonderful, and on top of that the stripped-down first verse is impeccably performed. Justin Fike delivers a winning solo and the good mood lasts the whole song, even when the group's enthusiasm isn't quite keeping up with the arrangement's technical demands. Overall, the Higher Keys take on this song is a great interpretation and a good performance, an artistic product to be proud of.

Much as I like the Cole Porter tune, a rock song featuring Emily Borromeo is the most memorable solo performance. She sings the Queen cover Don't Stop Me Now like she really believes in it. Anything less, the song probably falls flat, but as it is, her energy and another Mike Kadim groove propel this thing all the way to the end.

Tuning is the obvious asterisk on Lock it Up. It's not great. On the other hand, it's rarely distractingly bad. And I like this group, so I am not going to make an issue of it, even though somebody probably will. Instead, I'll use this space to say how much I appreciate the thought that went into all of the arrangements. Most of the songs have a beginning, a middle, and an end. The arrangers aren't afraid to try on ideas, like Priscilla Sung's affecting take on River. In general, they've tried to write some gorgeous music and do the best they can to bring it to life.

Go Higher Keys, keep it up. In your hands, the spirit of jazz is alive.

As live recordings go, Lock it Up from Brown University's Higher Keys is a noble effort. Yes, there are a great many issues in the blend, or lack thereof, and the tuning wavers at times, especially in the men's upper registers and in some of the jazzier moving passages. There aren't any truly impressive soloists here but maybe that's just the live nature of the recording that has sapped them of some of their power. The VP lacks a beat-establishing bass drum sound, but is quite nimble between the snare, toms, hihat and cymbal sounds, and the rhythmic missteps between the voices and the percussion are reasonably few and far between. All in all, it's a gutsy thing to record live and the results are commendable.

Well in that case, I'm afraid there isn't all that much to get excited about here.

It's not worth re-hashing and further elaborating on the issues described in the first paragraph, as they are discernible even to a less-experienced a cappella listener. Like their last effort, the appropriately named It's Natural, Lock it Up was recorded with seemingly few, if any, of the modern recording techniques favored by the top-notch collegiate groups. Understand that I'm not even speaking of sampling and looping, or even of auto-tune. To the naked ear (as it were), this sounds like the super-old-school, split everyone into sections, use one mic per section and one for the soloist, and record. I doubt that's how it was in fact done but if it was done that way, there's a reason that style was abandoned 15+ years ago. And if the CD was recorded with more isolation and separation between the voices and the tracks, then it makes many of the aforementioned — tuning, balance, and rhythm issues — all the more inexcusable.

So as not to only harp on the negative, it's fair to say that the Higher Keys are a pretty decent vocal jazz ensemble when they deliver their best work. Unlike prior efforts, the repertoire showcased here doesn't veer too far from jazz and/or swing-inflected takes on classic piano lounge and/or karaoke repertoire. The Higher Keys have never met a 9-11 or a flat 5-7 chord they didn't like, and to their credit, they don't shy away from some extraordinarily tricky harmonies. Unfortunately, without the benefit of better innate blend, or more takes in the studio, or a better mixer, or auto-tune, those fabulous chords can't help but wobble out of tune. Indeed, even in unison sections — hear the basses in the opening of Too Darn Hot or the sopranos at the top of the Gershwin Medley — multiple singers in the same section aren't quite in tune with each other. The interpretive liberties taken with these standards are also hit-or-miss: a smooth Eight Days a Week on the heels of the Bublé-inspired Can't Buy Me Love is a nice touch in the Beatles Medley, but the slavish adherence to the horn riffs from the end of the famous Sinatra version of Fly Me to the Moon yields some pretty disastrous results in the tuning department.

When they do stray from their comfort zone, the results are also a bit of a mixed bag: the thoroughly uninspiring and un-"rock" School of Rock disappoints with its cheesy plodding quarter note and endless running eighth-note arrangement. River shows some layering in the background voices that is sorely lacking from other arrangements, but Emily Borromeo's energy in the solo on Don't Stop Me Now sufficiently distracts and impresses above and beyond the workmanlike background arrangement.

I wish that I could recommend this album, as I'm a fan of so much of the material covered here. But precisely because it's mostly standards, you've heard it all before. And in this case, quite a bit better.

Judging from the track list of Lock it Up, the Higher Keys almost seem more like a show choir than they do a typical collegiate a cappella group. I must admit that the inclusion of a Gershwin Medley, a Cole Porter classic, and a cover of West Side Story's Somewhere had me sufficiently intrigued, partially because they're refreshing song choices and partially because I was skeptical that they could be pulled off convincingly. The good news: the Keys write some amazing material. The not-as-good news: the material isn't supported by the greatest singing. The co-ed group from Brown seems to know a lot about music in theory, but has some work to do in practice.

Let's get one thing straight: the songs on this album are wonderfully conceived. Drew Nobile provides the bulk of the arrangements, including the two medleys (Beatles and Gershwin). The fluidity of these two pieces is truly a feat; transitions are logical yet unpredictable, song choices are diverse, and styles are interesting and varied. His other arrangements are also carefully considered and often implement twists that take the listener by (pleasant) surprise. Then there's Cole Porter's Too Darn Hot, which is similarly well arranged (Aaron Stanton) by utilizing a highly effective build that introduces new layers, textures, and themes as the song progresses. Jon Russ's version of Fly Me to the Moon is also noteworthy for its interesting bassline (and truly stellar soloist in Aubie Merrylees). With the possible exception of the School of Rock track, every song benefits from an interesting chart, and this definitely helps the overall quality of Lock it Up.

I have to wonder, however, if the material may be a bit too ambitious for this group of singers. Most every track exposes some notable tuning issues, especially amongst the basses (who tend to struggle the most during complex moving bass lines). The sound is consistently thin, voices stick out, soloists are largely forgettable, and energy ranges from lackluster to average. It's kind of a shame, because a few of these charts deserve to be performed by the best of the best; I can only imagine how powerful Somewhere might have been if more attention were paid to the performance. The most notable exception is the finale, Don't Stop Me Now, in which the performers do come to life and aptly support the impressive chops of soloist Emily Borromeo. This energy seems to help chords lock, and alas, tuning problems are generally more evident during the softer moments of the album.

This is an album to appreciate for its artistic value. If the Higher Keys sell a book of their arrangements, I'd recommend using your money for that instead. Lock it Up is definitely refreshing with its unique (yet perhaps a bit esoteric) tracklist, so if you're sick of the same old collegiate a cappella scene, you may want to give this a chance. But chances are you'll be underwhelmed with the bulk of the singing, limiting this body of work to a one or two-time listen.