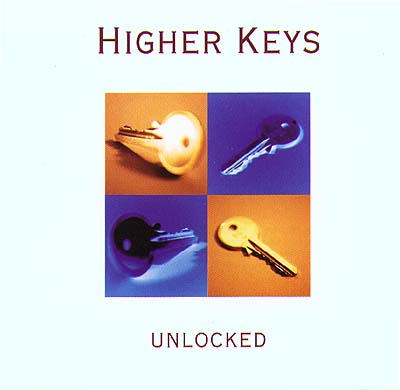 This album is an eclectic mix of tracks — I've never heard so many scat solos on an album that also covers Stone Temple Pilots and Abba. Unfortunately, the Higher Keys fail to convince me that they're meant to do any of the types of music represented on this CD.

There are several problems that persist throughout the album. The most serious is tuning, and to a lesser degree, blend. I hate to go for the obvious, but the name "Higher Keys" begs me to mention that several of their songs go noticeably flat (one, The Way it Is, goes a half-step flat in the opening 30 seconds). Other songs have tuning problems that pop up in a chord here and there (Stay, for instance, always falls flat and tunes badly during the last phrase of the chorus), and there are repeated spots where voice parts fail to reach the full interval they're going for. One track that largely escapes the tuning trap (but still suffers from inconsistencies in blend) is Dancing Queen, which instead plods along at a leisurely (but not particularly danceable) pace until the percussion kicks into double time for the last twenty seconds of the song.

This leads me to another general weakness of this CD (I promise, I will get to the album's strengths eventually!) — the lack of truly high-intensity songs. Several tracks have at least a modicum of energy - How Will I Know (where the soloist has an admirable range but she also caps off the song's overall squareness), Plush (which actually manages to rock, a little bit), and Here Comes the Flood (helped largely by the soloist, who convincingly manages to convey that he gives a damn!). But the majority of the tracks don't have the intensity needed to sell them. The jazz standards (Tuxedo Junction, Baby, It's Cold Outside, and Moondance — because Moondance as done by most a cappella groups, especially this one, really becomes a vocal jazz tune) are square, with soloists who lack the suaveness that makes jazz cool. Baby, It's Cold Outside, especially, while an interesting arrangement, is defined by a pair of soloists who never rise above the cheesiness of the old Saturday Night Live sketch I always associate with this song.

Which brings me to some of this disc's strengths, however obscured by its weaknesses. Many of the arrangements are quite interesting — it's the execution that's spotty. Several of the soloists stand out above the others — Sasha Greif does a good Natalie Merchant on These Are Days, I've already mentioned Edrex Fontanilla on the obligatory Peter Gabriel track Here Comes the Flood, and Amy Pooler puts some warmth into the Sweet Honey in the Rock cover, Stay. This is one of those albums where you wish the group had put a little more practice time in beforehand. I hope a lot of the tuning and other problems could have been smoothed out with a little more work; unfortunately, the end result is what's on the disk, which makes for a pretty unsatisfying listen.

Listening to Unlocked by the Higher Keys was not a very enjoyable time for me. I wanted to like this album, but I couldn't. There were just too many problems with it to overcome.

Looking at the lineup of songs made me think of all the songs that groups in the country have been doing for the past 2-3 years (or longer!). Nothing that made me go "ooh, that's interesting". The album started out with a moderately good version of These Are Days by Natalie Merchant which made me hopeful... That is until I remembered the rule that it's always good practice to put one of your best songs first. That made me wonder how mediocre the rest of the album would be like. I would soon find out... and keep being reminded for another 46 minutes.

The reasons for the mediocrity are many:

In the end, it just bored me.

There are a few good things about the album... There is Edrex on Here Comes The Flood; the recording quality is acceptable; and the vocal percussion is well done when it is done.

Other than that, I don't have much to say about Unlocked. It was a disappointing album that did very little to make me want to ever listen to it again. It is unlikely that you find much either.

This album is very much a mixed bag. This group does a lot of a cappella standards both in terms of classic a cappella (Lonesome Road, Moondance) and of the current a cappella trends (Preacher Man, Take On Me). The good news is there's nothing atrocious about this group...well, other than the fact that they mislabel the titles of songs ("Son of a Preacher Man", not just "Preacher Man", thank you). The bad news is that there's nothing, well, stellar. The arrangement evolution is very basic...still stuck in doo and bah land. They take doo and bah about as far as it can go, though, and most of the results are in fact listenable, particularly Here Comes the Flood and Plush (Although when you have one person doing solo AND vocal percussion it makes it tough to reproduce live..=) Their two attempts at jazz come off as Broadway-ish jazz, without the feeling of what jazz is. And whoever's idea it was to take Take on Me at half tempo...well, whatever. =) Overall, though, this is a pretty good album, and it shows that much of what this group is doing is right on the money...they just need to concentrate on the rough areas and work on broadening what they currently do.

Unlocked is an ambitious album: diverse styles of songs, done in complex arrangements making good use of the range of voices composing this mixed group, laced with vocal percussion. The group has a lot of energy going for it, each song sung as if they mean it (or at least having a helluva good time trying). A solid foundation is laid for some a cappella excellence.

Unfortunately, what could have been excellent is brought down into the average by some intertwined factors: shaky tuning (the group is sometimes painfully at odds with itself), especially among the male voices; uninspired and at times unconvincing soloists; and some moments of ill-balance between the upper and lower voices.

Tuning is a problem most often when the bass line is naked (often supported by only a single voice), but also falters in some close-harmony moments among all the voices. I hate again to knock the guys, but the girls have it in terms of solos while their masculine cohorts simply do not. Finally, blend (while difficult to achieve which such disparate things going on in each of the voices) could be worked on to substantial advantage.

I can't shake the feeling, however, that the group had trouble listening to itself in the studio. As I've said, their arrangements are quite interesting, and are attacked by the singers with nothing if not pure energy. To see the Higher Keys live would be, I think, a realization of the promise shown by this recording. To be stuck with the recording, however, is no bad thing: it is generally quite listenable and exciting.

It was hard for me to review this CD, if only that I really WANTED to like it. A young group from a school with a fantastic track record for a cappella groups, the Higher Keys deserve better, but to get that they need to give better too. Their track selection was pretty standard, save for three songs that I feel are rarely, if ever, covered. So, their performances would have to rely on the quality of their arrangements.

There in lies problem number one. I felt like I heard it all before. At times, it felt like the Keys had as well. The energy did not last throughout the whole recording. There were some excellent solos- Edrex Fontanilla and Carly Draniginis deserve recognition for their respective solos. But there were also tracks that seemed like the soloists were mismatched.

I'm also not a fan of laying percussion tracks in after the original track was done, especially when it is fairly obvious. Poor mixing of some of the percussion tracks led to VP heavy songs which were not fun.

The only track I truly liked was the first, These Are Days. Something clicked in the blend, the tuning, the solo, the arrangement, that was lost on the other twelve. I'm sorry, other thirteen — there was a ghost track of the alma mater with a grainy studio effect added. Why? Who knows?

Two other things I picked up on: there were some glaring tuning problems in a few of the tracks. In others, there were minute shifts in tempo between parts that threw the VP'ers off when they tried to create extra percussion lines.

I do have a lot of hope for this group, as only three of their fourteen members will have graduated by the end of the '98 school year. Hopefully, with another full year as a tight nucleus, they'll produce a stronger album.

If you would like to order a copy of Unlocked, please send a $12 check made out to the Higher Keys to: