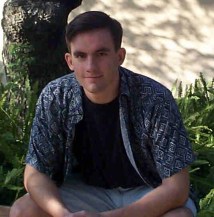 I live in Encinitas, CA, and just graduated from Caltech. Currently, I'm working as a video game programmer (everyone go buy NFL GameDay 2001!) and exploring various ways to return to the a cappella field that I love so much. I've been a huge a cappella fan ever since my freshman year of high school when a group of seniors did Brown Eyed Girl for our spring show. Since then, it's been a major part of my life.

I sang for many years in an informal group named "The Genuine Article" with my high school friends. At Caltech, I co-founded and wrote/arranged for a contemporary men's group named "Ecphonema", doing edgy pop/rock with a few classics mixed in, using individual mics. Ecphonema is busily recording an album with last year's lineup or personnel.

I also sang in a semi-pro sacred a cappella group, named "A Simple Gift", which focused on tight harmony arrangements of hymns and spirituals. Outside a cappella, I most recently sang with the Caltech Chamber Singers and was King of the Men's Glee Club. I've sung in dozens of church and school choirs over the years as well. Philosophically, I feel that this whole a cappella thing is one of the coolest ideas in the history of music, and any group that has what it takes to get any kind of CD released deserves the utmost mad props.