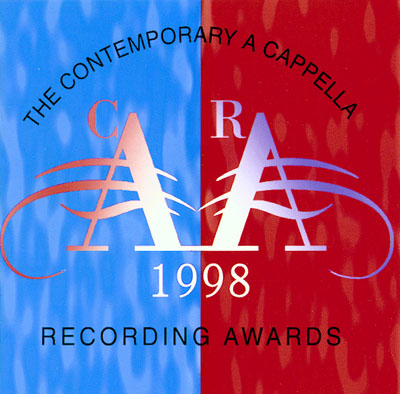 Rockapella's Lift Up kicks the groove off: blue-eyed soul in a perfect pop package. Vox One delivers an epic fusion-jazz workup of Chameleon which is sure to please their fans, but struck me as just a little contrived. STREETNiX' Tic Tic Boom sounds like a late '90s version of INXS: an intimate lead over great production. Alternative vocal band spiralmouth delivers a slightly rougher-round-the-edges rendition of the stunning Hush featured on their eponymous release. Off the Beat maintains their tradition of power solos, this time in country crossover style, though again, the back-ups fall a little short of the lead.

Linda Hirschhorn and Vocolot's Sham'a conjures up more than a few Dead Can Dance tracks, due in part to their use of real eastern percussion. The Bobs swing a clever story song that has Richard "Bob" Green doing so much "walking" that your feet hurt. The Fairfield Four belt out down-to-earth, gospel-influenced, street-corner doo-wop with enough energy to convert even a die-hard contemporary fan. It's Persuasions style with better intonation.

Then there's Special Feature. Sigh. The track was playing and I was trying to put into words my disappointment when my friend looked me right in the eye and said,"This is why people hate a cappella.". To be fair, it's sung at about average skill levels; it's just so unbelievably cheesy, so devoid of anything approaching humor, that it was all I could do to play it through. The Western Wind's chamber-ensemble-meets-jazz-choir performance of 'Round Midnight doesn't do much to propel us through the CD's weak midpoint.

Thankfully, Nightlife brings us back with some ringing barbershop chords. Artisan's Mabel gives both a laugh and a toe-tap. The Heebee-jeebees twist a Christmas classic to a calypso beat, but after getting our attention with that choice, don't really go anywhere. Our hero, Da Vinci's Notebook, races in to save the day with fast-paced goofiness that somehow doesn't gallop away from its musicality.

The CD's sunset tracks take the listener on a soothing path to completion and Canto Nono's pure, pleasing sound starts the journey. But when The King's Singers take the stage, they also take the musicality to new levels. (I never cease to be amazed at the effortlessly soaring countertenors in this group! ) The Concordia Choir and The Dale Warland Singers do nothing to spoil this gentle goodnight.

That's the skinny, kids. Some great, some middle of the road, and some crap. CARAs 1998 is the poster child for learning how to program your CD player.

1997 seems to have been a good year, at least if the tracks on this disc are any indication. And they should be: the CARA selection process is supposed to involve as close to a complete consideration as possible of all of the a cappella recorded in a given year, culminating in the best songs from each of a number of categories being chosen for Recording Awards. So these songs should sound good.

They do. The artists represented are the best in the business, not simply because of name recognition or sales (in fact, probably in no case because of sales; this is a cappella, right . . . ?), but because each has dug down past stereotype and accumulated a cappella common sense to reach a more fundamental and invigorating approach to the art. These artists are the best, and it shows through in their songs.

Spirituality enough to shake the floorboards from the Fairfield Four; eerily smooth technoppella by STREETNiX (my favorite part is the low, almost growled "tic . . . tic" before the BOOM); utter reverence towards an earlier time from The King's Singers, meeting sheer irreverence warbled and nasaled out by The Bobs. And Rockapella. And spiralmouth. Doo-wop, barbershop, world music. This album is a lesson in how a cappella can be alive. Listen and learn.

This particular CARA album is fabulous. Such a smooth, consistent sound between tracks allows for non-stop listening and hours of a cappella pleasure. In comparison with the CARAs 2000 compilation album that I've recently reviewed, this one is everything that the CARAs 2000 disc is, and everything that it isn't.

There are so many tracks on this album that you want to listen to over and over again. A few tracks on this album have actually caused me to go out and purchase the albums from the groups that produced them. Liposuction from Da Vinci's Notebook is another comical masterpiece from the clowns of contemporary a cappella. They're developing a dynasty on the CARA award for Best Humorous Song every year.

The greatest thing about the CARA compilation albums is that you have so many genres of a cappella music represented on one album. As an example, Tic Tic Boom showcases electronic a cappella from STREETNiX, and just a few tracks away you have 'Cross the Mason Dixon Line, showcasing the finest of barbershop from 1996 International Quartet Champion, Nightlife.

If you're into bass singers, this could be the album for you. Brett Littlefield from Nightlife hits the most solid low C that I've heard in long time at the end of 'Cross the Mason Dixon Line, and not to be outdone, the bass for The Fairfield Four (about whom I couldn't find any information) has a great tone and bass resonance on Help for the Needy (Today). Both of these guys have a few more steps down to their basement than the rest of us. (Barry Carl from Rockapella excluded.)

Along with all of the great tracks that I've previously mentioned, this album features tracks from contemporary a cappella icons Rockapella and spiralmouth, collegiate powerhouse UPenn Off the Beat, and the seasoned gentlemen of a cappella, The King's Singers. You just can't go wrong by purchasing this album. This is a great album for the most die-hard a cappella fan, and also a great gift for a friend that you're trying to get hooked on the wonderful world of vocal bands.

The CARAs 1998 compilation is like a twelve course dinner at a five star restaurant. There is no lack of quality, quantity or variety. The Contemporary A Cappella Recording Awards span many genres and cover both professional and collegiate groups.

The comedic highlights include the parody A Song from the Fifties, Liposuction, and a quaint Mabel. The last three tracks are classical pieces, serene and beautiful. Chameleon and Tic Tic Boom are the more electronically altered pieces, yet they still come off as distinctly a cappella. The only collegiate track is contributed by the deserving and ubiquitous Off the Beat.

Of course, since it is such a diverse compilation, the flow of songs is not as cohesive as perhaps the BOCA albums, which focus on the smaller world of collegiate a cappella. Nevertheless, CARAs 1998 is a great album, and I would suggest you get a copy.

These days, it seems like every third album off the MAC or PAC rack wants to portray itself as presenting "a wide spectrum of what's being done in modern a cappella". Sadly, most such collections turn out to be pretty one-dimensional, in spite of their claims. Fortunately, the producers of the 1998 CARA compilation CD managed to actually deliver as promised, packing an amazing variety of styles onto the album. I would be amazed if one listener in a thousand could go through this whole collection and not hear anything new. Even better, almost every style that comes up to the plate manages to represent itself admirably.

The album's composition is weighted towards pop, rock, and jazz (as are the CARAs themselves, I suppose), but even those songs from the same genre still mix it up. For jazz, we have the persistent speed-walking lounge-appella bass line of Swingers, the lush subtle harmonies of 'Round Midnight, and the indescribable self-descriptive Chameleon, which is as much a rock piece as it is jazz, or anything else. On the pop face of the coin, we have Rockapella's peppy Lift Up, the dark and electronic Tic Tic Boom, and an early version of one of the most hauntingly beautiful pop songs ever written, Hush. Throw in the hilarious Liposuction and Song from the Fifties, a slew of folk/world standouts, a little gospel and barbershop, and round it out with three gorgeous classical pieces, and you have the definitive a cappella sampler.

The album listening experience was not 100% rosy, of course. There are tuning errors here and there, and some of them are unfortunately pretty dramatic. Some of the folk songs struck me as very repetitive, even allowing for differences in style and taste. The mixing of the album has one strange feature: many of the louder women's parts had some kind of unfortunate amplification of painful overtones, making them sound more strident than I suspect they truly are. The ordering of the tracks also struck me as unusual — the middle third of the album plays like a mix CD, bouncing from one song to the next with little predictability, while the first and last thirds of the album are very consistently mainstream and classical, respectively. And of course, this album suffers the fate of every suitably broad sampler: unless every one of the new genres you meet on this CD becomes a favorite, there's no way this one is going to live in your car's CD player.

So, the verdict: the tuning and mixing surprises aren't enough to keep this from being the definitive sampler of everything going on in the a cappella world. It's definitely worth a listen; even if the breadth keeps it from becoming a repeated favorite, you should still get a taste of what you're missing. If even one style you haven't explored before captures your attention here and sends you off in a different direction as a listener, then I think the producers of CARAs 1998 will be pleased.