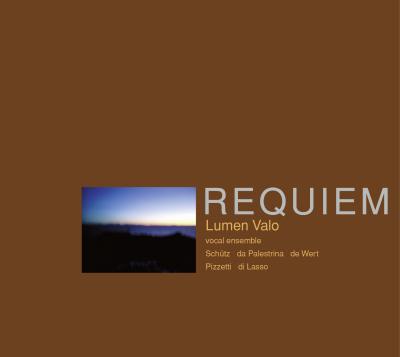 Former RARB reviewer Tom Czerwinski's comment on Lumen Valo's last album Maria succinctly encapsulates the frustration that I had while listening to their latest recording Requiem:

Overall, Maria showcases a talented ensemble that sings beautifully but with restraint, sacrificing exuberance for delicacy. A better sense of contrast and freedom would benefit Lumen Valo's sound greatly.

The music and performances are exquisitely rendered on this disc; there is no doubt that these masters of choral performing are still at the top of their game. It's evident that members have developed a rapport that transcends a mere working relationship. They understand each other's timbre and how their unique blend (or lack thereof on occasion) works for the group. The movement of the phrases and the coordinated releases are effortless, as if they are singing with one voice.

But the utter perfection of Lumen Valo's Renaissance style leads to unfettered boredom after repeated listening. Unless you are extremely well versed in classical music in general and Renaissance music in particular, the work becomes very repetitive. Motifs cross songs and bring a unifying thread to the tracks but can lead to muddiness and confusion to the casual listener.

Instead, what you have here on this disc are tracks that blend seamlessly into the next. Which in and of itself is remarkable considering this is a cobbled together from several German and Italian composers who are separated by 350 years. Truthfully, there is no other Requiem like it. Except for the slight pause between songs, you have one song that seems to grow out of the other. That they manage to make a cohesive program out of disparate parts is a testament to the talent that is Lumen Valo.

There are dynamic changes in volume, but all seems tethered to emotional restraint. This flowing quality and oneness is beautifully evident between the Kyrie, the Graduale: Die mit Tränen säen and the Tractatus: Adesto dolori meo which continually build from a modest whisper to a rapturous sound.

The casual listener. Hmmm, maybe that's it. My own personal bias wants a Requiem that's filled with fire and brimstone from a musical standpoint — some sort of excitement that moves the spirit. An album that can be played in the background and you unconsciously move from section to section. Lumen Valo asks you to be a willing participant, engaged in their performance from the first inhalation. Get this disc if you are ready to do so.

Angelic. That's the primary adjective that came to mind as I listened to Lumen Valo's Requiem. Lumen Valo is an eight-member Finnish classical ensemble with an emphasis on early music. This album focuses on Renaissance music mainly from three giants of the era — Schütz, Palestrina, and di Lasso — but also includes two pieces from lesser-known composers Wert and Pizzetti. (Listeners may recognize the haunting melody of Pizzetti's Dies irae.)

The group blends together fabulously, without exception. As I mentioned in my review of Lumen Valo's Maria, the group's sound reminds me of the Cambridge Singers; however the Cambridge Singers are a much larger group, so Lumen Valo's blend is even more impressive to me than the Cambridge Singers'. It would be so easy for one or two of Lumen Valo's individual voices to stick out, but that never happens on Requiem, except when called for by the music. Lumen Valo's feel for this music — the rise and fall of their overall dynamics, the periodically soaring sopranos, their overall sense of purpose in delivering this music to the listener — is unquestionably outstanding. This is truly musicianship of the highest caliber. Unlike the album Maria, where I commented that the group did not always convey the emotion of the pieces to the listener, Requiem delivers both the spirit and energy of the pieces in addition to the tones and words.

Unfortunately, another complaint I had with Maria does persist in Requiem. That is what I termed the "warmth" of the recording, or lack thereof. Both albums sound like they were recorded in a cathedral simply with two microphones placed out in front of the ensemble to provide a stereo recording. Individual mikes are almost certainly not employed. There is little to no post-processing. All of those combine to give the sound a kind of hollow feel. Perhaps it is done deliberately, so that the listener can feel what it would be like to be in the cathedral audience with Lumen Valo in a performance. That is the effect. In my opinion, this effect produces a distance between singers and listener that prevents Lumen Valo's recordings from rising to their full potential. By contrast, in another classical album I recently reviewed, amarcord's Rastlose Liebe, the recordings felt very close and personal. I found myself wishing that Requiem had that same sort of sound.

Let me conclude with a sincere compliment. My five favorite tracks were Unser Wandel ist im Himmel (Schütz), Kyrie, Sanctus, and Agnus Dei (Palestrina), and Giovane donna (di Lasso). As I was compiling that list, I noticed that Adesto dolori meo (Wert), which won the 2010 CARA for best classical song, did not even make my top five! One of the top classical tracks of the year, as determined by CARA voters, may well not be among the top five tracks on this album! That surely testifies to the quality of the music found here. Requiem was the runner-up for the 2010 CARA for best classical album and deservedly so. If you enjoy early music and don't mind cathedral-style acoustics, this is a "can't miss" album.

P.S. Since there aren't soloists on this album, I gave a "5" in the "Soloists" category based on the caliber of the individual voices I could hear.

The Finnish vocal ensemble Lumen Valo has a distinctive style, tone, and repertoire, that make the group's recordings consistent and predictable (in a good way!). With Requiem, the group strove to follow "the structure of the traditional Mass of the Dead", according to the album's liner notes. Despite the diversity of languages and eras (a span of 350 years), these songs work together cohesively.

My two favorite pieces here are the two longest. The 11-minute Dies irae contains some really beautiful volume swells that grow and build to a fiery intensity. So much precision and focus goes into a longer piece, and Lumen Valo really nails it here. (As an aside, one of my disappointments in the group's previous release Maria was a lack of dynamic range. I still wish they'd done more with dynamics on Requiem, but the climaxes on Dies irae are really lovely.)

The other long piece on Requiem is the 5-part Lagrime di San Pietro, which spans tracks 6-10. The group has a strong intensity on these five short pieces (each one is about two and a half minutes), yet each one can stand on its own or within the context of the larger oeuvre. The phrasings in Ma gli archi are terrific; the group does much with subtle volume changes in short phrases. Though they are not the large swells I was hoping for, these small changes really add to the song's mood and texture.

The packaging and liner notes for Requiem are fantastic as well; this is obviously a group that has put a fair amount of thought and care into the presentation of its product. In addition to all the songs' lyrics — in the original language (Latin, Italian, German) as well as the Finnish and English translations — the group has included a brief essay about its selection of songs, written by tenor Kari Turunen and translated into English. The passage gives an interesting history of these songs and really illustrates the group's focus on pulling together a cohesive whole.

(The note I made about the "Soloist" category in my review of Maria still stands: there are no soloists on this recording per se. I interpreted that category to reflect the caliber of individual voices that rose above the ensemble when the song called for it. No one voice ever stuck out from the group as a whole.)

To order this album, visit Fuga.fi.