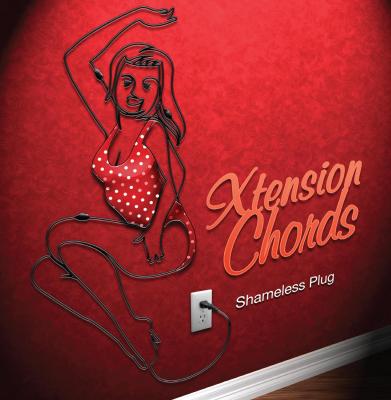 If a sky-high tenor belter could somehow be a secret weapon, the Xtension Chords would be the stealth group of the year. Jim McGuire peals out on solo after solo, sounding like the second coming of Ball in the House's Aaron Loveland, this time in techno color. That kind of wattage adds to this group's already considerable energy and keeps Shameless Plug from fading into unmemorable obscurity.

The charisma has some obstacles to climb, for sure. The XChords are strangely fond of old school syllables, hanging onto "bop bop" or "chun chun" for minutes at a time. They also dust off some recent retreads. Apologize, while proficient, is strangely lifeless — perhaps because it's the umpteenth cover Bill Hare has polished up this year? — and Viva La Vida's only distinguishing feature is a set of percussive accents that sound like a bombing run as the group careens toward the end of the song.

McGuire is fabulous on Just Dance and the opening salvo of the hip-hop medley Talkin' Dirty, which are also the two best songs. My next favorite song is Online, one of the least polished yet most compelling tracks on the disc. Brian Thoman is charming with the solo, taking an otherwise unremarkable performance and catapulting it into the ranks of the listenable.

The old-school arrangements are perplexing since this is a group that clearly doesn't shy away from making the most of technology. The production is generally tastefully deployed, but neither does it try to pretend this is some sort of excessively "natural" exercise in retroactivity. Maybe it's for dancing? The doo-woppy "stealin'" refrains on the Ben Harper track sound like they'd be fun for choreography, especially in the last couple of choruses. At the same time, the track isn't in great tuning and it's hard not to snicker when the backing band cuts out for the a cappella chorus with "steal my kisses — pow!"

Dance beats are certainly as much of a theme as the vocal explosions. Billie Jean is boring but commendably grooved, and Poses saunters forth like some kind of Jimmy Buffett beach ballad. It's got a nice swing to it, even if this version can't melt my heart like the soulful Academical Village People version from a few years back that never fails to melt my heart.

Shameless Plug does feel gimmicky at times, like an ordinary-looking family band trying to win an audition with props and scarves and campy dancing. And yet, it is a refreshing change of strategy from the loud-loud-loud that has been winning the a cappella day. This album actually has some soft bits that are — gasp — often better than the loud sections. That's a novelty that'll get my attention every time, especially with the secret weapon waiting in the wings.

Seeing Just Dance as the opening track isn't a confidence builder. After all, what can be added to GaGa's personality-dependent songwriting? The Xtension Chords have the answer: a head-turning lead and an arrangement that remixes and re-imagines rather than merely attempting a pale imitation. That's the esprit de corps of Shameless Plug: bold reinvention, the mark of true artistry. Add Bill Hare's deft mixing, rich dynamics, and a panoply of gifted leads and you get one killer release.

Apologize, Gone, Poses, and Viva La Vida are simply brilliant arrangements, easily worthy of a cappella's highest awards. All were penned by rising star Kellen Fant, whose originality puts the Xtension Chords at the head of the pack. Like that of the award-winning Samrat Chakrabarti, Fant's style is creative, respectful and distinctive. Others also add some noteworthy arranging. Chasing Cars, arranged by Nick Holwey, has a few disappointing syllables, but manages to achieve a genuine emotional power as well. Story of a Girl, Online, I Believe in a Thing Called Love, and Talkin' Dirty (Hip Hop Medley) are upbeat and amusing with clever turns, but ultimately a bit less groundbreaking. Still with a generous fifteen songs, Shameless Plug has room for these simple crowd-pleasers.

The Xtension Chords also have the lead department down pat. Jim McGuire's soulful, covered tenor (Just Dance, Geek in the Pink, I Believe in a Thing Called Love, The Pieces Don't Fit Anymore, and Talkin' Dirty) will surely appeal to fans of Ball in the House's former front man, Aaron Loveland. Nick Holwey reveals emotional vulnerability on Chasing Cars and Kellen Fant delivers both honesty and grace on Poses. Chris Rausch simply rocks out with an appropriately insane falsetto on I Believe in a Thing Called Love and pulls heartstrings with the emotional Coming Home. Jay Taylor manages incredible expressiveness even in the restrictive rhythms of a fast-paced Viva La Vida.

Nail the mix, leads, dynamics and arranging and you're pretty much set.

On the critical side: I often found the auto-tuned intonation to be too perfect. (Coming Home in particular has an inappropriately robotic tone.) It may have been the lesser of evils, but the frequent tuning artifacts kept a few scores just shy of what they might otherwise have been. It's also worthy of note that perfect intonation is not the same as perfect blend, an area that varied quite a bit from song to song. Billie Jean delivers an exciting arrangement, but here the lead is so imitative of the singular Michael Jackson that one cannot help but directly compare, an act that never favors the imitator, no matter how talented. And finally, Steal My Kisses is simply a middle-of-the-road finish to the album, failing to respect the exceptional use of space and dynamics found on the preceding tracks.

Despite its imperfections, Shameless Plug is worth owning, especially for collegiate arrangers. Listen to how freely the Xtension Chords explore the musical possibilities of each song. Listen to the dynamic and emotional range of the performances. When the Xtension Chords cover a song, more times than not, they make it their own. Few collegiate groups can lay claim to that highest of compliments.

Front-Loaded, the new EP from the University of Illinois Xtension Chords, is a fantastic five-song album that sings circles around the group's lackluster 2007 effort Creative ... oh wait, scratch that.

Return to Goodness is the title of the latest album from the University of Illinois Xtension Chords, making sizeable strides to return to the standards established back in 2003 even though it can't sustain the same level of arrangement quality and sophistication all the way ... oops, OK, take three.

It's been less time than the four year scenario that I mentioned at the end of my review for Creative Outlet, but there's clearly been a fair amount of turnover within the University of Illinois Xtension Chords. And as heard in their latest album, Shameless Plug, some of the change is for the better and some things haven't changed at all.

As reflected by the opening of this review, this album is really a mini-trilogy of sorts. The opening five songs are all reasonably strong, with only Just Dance reaching its potential as a fully realized, complete arrangement, even as the solo left me somewhat overwhelmed (but perhaps men trying to sing Lady Gaga will do that). If anything, the shortcomings on these songs tends to be a lack of imagination in the back third — bridges are generally underwhelming and repeated choruses are, well, repetitive — and overcomplicated and/or overmic'd vp (the popping lips in Story of a Girl are particualrly distracting).

Though there are hints of it on earlier tracks, by the time we finish Chasing Cars, we're squarely in a decidedly more "vocal" section of the album. It's refreshing to hear the guys ease back a bit on the auto-tune and the sampling but with it also comes a down-shift into simpler and less interesting arranging. Sometimes it works and sometimes it doesn't, so this middle section is uneven at best. Sadly, Online is a throwback to the simplistic, unison backgrounds of Creative Outlet and it robs what is a very cute song of any real pizzazz. Geek in the Pink manages to establish the right funky groove and Jim McGuire does a terrific job with the never easy Jason Mraz solo, even as the song fades a bit from the bridge onward. But then we hit an altogether pedestrian, predictable and downright boring Billie Jean, which I had to resist the urge to just skip over halfway through. Thankfully, that's followed by a lovely take on Poses — by no means a complicated arrangement rhythmically, but one which is well-suited to the song. But the roller coaster continues with I Believe in a Thing Called Love, which, despite the vocal gymnastics of soloist/arranger Chris Rausch, cannot escape its quite square background block (and certainly not the hyper-cheesy interpolation of More Than a Feeling — for me, that feeling was "ugh").

The last third of the album? Well, perhaps the less said the better. This is a group that only records once every few years so it's easy to imagine that they feel a need to include more repertoire when they can finally put out an album. Unfortunately, there's really nothing in these last five songs that needs to be here or adds anything to the album. The group singing on the hip-hop medley could not sound more vanilla if it was done by the Whiffenpoofs, and the unison (or nearly unison) rhythms and/or big block chords that are littered everywhere are yawn-inducing. Quite simply, this late in the game, if you're going to include Viva La Vida and even more so, Steal My Kisses — and I would say don't — you need to do something far more interesting than a straight-ahead three-part arrangement, even as nicely harmonized as it may be.

Where does that leave the Chords? Well on the one hand, they've come a long way in the last three years or so. That said, they still have a ways to go. In the meantime, if you can manage to only get your hands on tracks one through five, live it up and party. If you can only get your hands on tracks one through ten, enjoy it with a small grain of salt. If you go for the whole enchilada, I'll wake you after track fourteen.