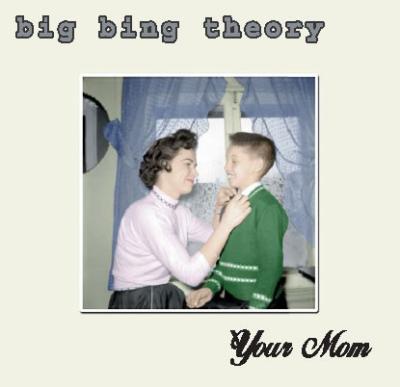 Lots of fresh-faced energy from Big Bing Theory on their latest, Your Mom. Poor tuning and simple arrangements mean it won't have much of a non-yearbook audience. But this group deserves praise for having a good time, taking a few risks and making something of themselves.

Like Songs From The Green Room, reviewed last year, Your Mom has a very youthful sound. The soloists all sound young and chipper and squeaky clean. They sound like kids who would write "And we especially thank God, who gives us life and love through one another, and our Blessed Mother Mary who is a Mom to us all" in the liner notes and mean it. This puts them a little out of step with your typical world-weary Top 40 writer, which might explain why these covers tend to be a little too fast and not very sultry. Galileo and Insomniac both sound like they were sung by (very talented) middle schoolers, which is interesting but not quite what we're used to. There's also some drama club runoff — Stand By Me is Ben E. King as channeled by an Erasure-loving theater major, including vibrato and a New Wave beat.

If Big Bing Theory sticks with its current approach, there are some key things they can do to get better. First off is, of course, improve their tuning. Second is raise some money for a good engineer. A lot of these chords are close enough that some studio magic could really pick things up. Third, they need to tweak their arrangements to make more effective use of their upper register. This group is blessed with a lot of sopranos and tenors, but they sometimes suffer from overexposure.

Let me illustrate these suggestions with two examples: When You Come Back Down and Gangsta's Paradise. While wildly different in tone, these two songs both make ample use of the stratosphere. In both cases, the group shows good instincts but could benefit from a few arrangement tweaks and some autotune. When You Come Back Down revolves around a beautiful up-the-octave solo from Marie Gibbons. I think the group was absolutely right to send her soaring, but she would have been much better supported by a lower-pitched arrangement that was pulled further back in the mix. In Gangsta's Paradise, the multioctave block chords are a good idea but don't quite lock; some digital editing could fill in the gaps and add some power. In terms of register, the showtuney male melody spoils an otherwise convincing mood. Pulling it down the octave could have spotlighted the women more and allowed the men to keep the growly feel of the spoken word segments.

Big Bing Theory deserves huge props for stacking their album correctly, with the good stuff at the front and the weaker stuff toward the end. They also get gold stars for picking good songs and sticking with them. I think they've got a good thing going on, whether or not they try to jump to the next level.

That's the best way to describe what Gonzaga's Big Bing Theory has made from their last CD Songs from the Green Room to the current Your Mom. Overall, the arrangements are more interesting, the production is a step up, the tuning is improved, the song selection is more engaging and the VP is significantly better. All in all, a big step forward.

Big Bing Theory can most certainly be that when they listen to this most recent offering — especially those who were part of Songs from the Green Room which was definitely a friends and family album only. Indeed, the members' moms who are prominently featured in the liner notes of the CD are no doubt beaming at what their sons and daughters have achieved.

Unfortunately, that's something Big Bing Theory still needs in order to be taken seriously in the greater collegiate a cappella world. The group has addressed quite a few of the glaring issues that plagued its previous efforts, but some of those solutions have created new problems, and overall, some of the problems haven't quite faded away.

Most notable is tuning. It's harder to pick out on this CD because the VP and basses have been mixed so far forward in many cases that they almost obliterate the background "block" (see Bed Of Lies for the most glaring example). But on songs that minimize or eliminate VP, there are those old unison intonation problems coming back to haunt BBT: the basses in When You Come Down are easily a quarter-tone or more off from each other and they're starkly exposed in the arrangement; the arpeggios in the middle of Stand By Me are another example that jumps out; ditto for the tuning in the sopranos and altos in busier passages throughout the album (the sopranos on I Believe in a Thing Called Love for example). Granted that it's hidden far better on this CD thanks to craftier mixing and more effective VP, it's very much still there.

Also an issue once again is song selection and soloists. Though BBT for the most part has avoided the unofficial "Most Overdone" list this time (Galileo and Stand By Me? being possible exceptions), the soloists in several cases just sound downright odd.  The legit-ness of David Gaines on Stand by Me? is the worst offender, but his solo on the I Believe in a Thing Called Love also troubles, as does the group's Music Director, Brock Athman, who just feels wrong for his Insomniac? effort, and Dan Gray, whose head voice just can't pull off She Will Be Loved with a "break"? that sits in a very inconvenient place for him.

Then there's the VP which is so much better than last time it's scary. Sadly, the group seems to have fallen a bit too much in love with it so that it's almost everywhere and often too prominently featured. The heavy-handedness of the beat in Galileo mars what is otherwise one of the group's best efforts, and absolutely ruins what is already a weak effort in Stand By Me. VP — great to have, even greater when done well, but still to be used with discretion.

My last review of BBT used an NCAA tournament analogy for these vocalists from perennial Big Dance crowd fave Gonzaga. With Your Mom, perhaps the ‘Zags have, to their credit, made the tournament this year. But only as a 16 seed. And #16 seeds have almost never been a real danger to upset a #1. This album is no different.

Big Bing Theory is brought to you by ... your mom. Well, at least I think that's the theme of the Gonzaga group's second album aptly titled, Your Mom. When you open the CD case, what do you see on the back of the insert booklet? Pictures of the group members' mothers, of course! Who is the first person the group thanks in its liner notes? Why, their moms, silly (and their dads too, just to be fair)! Unfortunately, though, Big Bing Theory's moms couldn't help make Your Mom more than a mediocre collegiate album.

I can't blame BBT for trying. It's evident on the album that these students love what they're doing. Each track is filled with tons of energy. The problem is that it's uncontrolled and uncontained energy. They need more experience and more exposure to college a cappella from across the country.

RARB reviewers (myself included) harp too much on overdone songs, so I'll just let you look at the track list and conclude for yourself. Suffice it to say, there is nothing new or innovative on Your Mom. Effects are minimal, at best. The arrangements are uninspiring and old-fashioned. They are similar to the arrangements done by groups in the early '90s.

The soloists are often overmatched. Insomniac is hardly a Tenor I solo, yet the soloist was either unable or did not attempt to hit the top notes. I've heard and seen many baritones sing those notes without difficulty. Right Here, Right Now, When You Come Back Down and More Than Words, all originally performed by men, are sung by female members of BBT. I'm generally not a fan of when a female sings a male solo and vice versa, unless that person is so outstanding that the song must absolutely be sung. That is not the case on these three songs, as the soloists just does not seem to match the song properly. The girls all sound fine and nice, something just doesn't match right. If you're looking for a balanced number of male and female solos, then choose and arrange an equal amount of songs originally performed by male and female singers. Avoid running into this problem by choosing songs that fit your group.

The mix and studio engineer don't help matters either. The balance between parts is often uneven (sopranos are too loud here, altos are too loud there). There are several pitch problems throughout the album, and worst of all, lots of scooping issues. These are frequent, even expected, in live performances, but should be easily fixable issues that a decent engineer should catch during the recording process.

The standout here is David Gaines. He pulls in the two best solos of the album on Stand By Me and I Believe in a Thing Called Love. This is the first time I've heard anyone match the energy, intensity and ridiculously high notes of The Darkness. Gangsta's Paradise is also a surprisingly enjoyable track. Pat Nixon takes a successful stab at rapping, and the arrangement is simple but works well.

All of this aside, BBT has the framework for improvement. The group is young (founded in 1998), and the arrangements aren't too bad for a group of this age from a small school on only its second album. A bright future lies ahead if they are willing to listen to as much varying a cappella as they can, perform with a number of different groups from different areas, and learn and absorb as much information possible.

But for the here and now, I have to wonder what this album would sound like if all the songs had been sung by the moms of Big Bing Theory. I'm guessing it wouldn't sound much different than what BBT has given us.