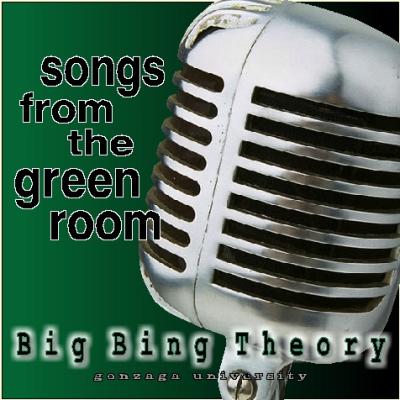 Yearbook album from the Big Bing Theory — it's endearing, if not very good. If these are your friends, buy one and enjoy. It's plenty good enough for that. But the 'Zags have some work to do before they enter any contests.

Songs from the Green Room has a light, youthful sound that seems to excuse, or at least explain, the poor tuning and straightlaced arranging. If this very same album had come from a high school group, we'd all be saying nice things about what good collegiate a cappella singers its members would become. Well, it may be that in Spokane, Washington, there aren't any established groups to look to. A name like Big Bing Theory seems to speak to making something out of nothing. If they've had to reinvent the wheel, it's not so surprising to see what they built.

And there are some things to praise about this album. It's got a nice energy to it, a very uniform blend and a surprising anchor in the sopranos, of all places. The women seem to anchor the arrangements from the top down, and the most successful songs are the ones that let them drive. I've actually grown fond of the Philip Glass-like take on In Your Eyes, with its sweet female solo and minimalist, high background. It's the best song on the album, with appeal for the bigger world if you discount the goofy instrumental solo in the middle. Meet Virginia also does pretty well, with a strong performance from the guys and more rhythm than a lot of the other songs.

Rhythm is lacking in most of these arrangments, which appear to have sprung full-grown from solar flares or something. There is absolutely NO information on where they came from in the liner notes. By the group? By a music professor? From the CASA library? All of the above? Whatever the case, they involve a lot of block chords, a few faint buried moving parts, and a fuzzy baritone-bass line. The vocal percussion is decent, if basic. The lack of syncopation can be puzzling, especially on Africa at the top of the lineup and Call Me Al at the back end. Straight-ahead maraca sounds give the Paul Simon tune a funky samba effect that I doubt was intentional.

At the end of the day, tuning is what really sinks this disc. Most of the songs just have real problems that the average listener could gloss over in a dorm-sing but would expect to be fixed for the recording. This would have been a great album in 1990. For family and friends of the group, there's still much joy to hang on to.

Who knew there was a cappella at Gonzaga? A fair question, but then again, until 15 years ago or so, I didn't know there was basketball at Gonzaga either (John Stockton notwithstanding) and that hasn't stopped me from delighting in the 'Zags yearly bracket-busting in the NCAA tourney. Sadly, the school's only co-ed a cappella group, Big Bing Theory, has a long way to go before they match the success of their roundballing classmates.

In the early to mid-'80s, BBT's 2nd album Songs from the Green Room, might have been a laudable effort. So-called rock/pop a cappella was still pretty new to the scene and a bass line plus some ooh's and ah's and a decent soloist still constituted a relatively new sound on college campuses when applied to modern-day radio hits (as opposed to Randall Thompson's Alleluia or the greatest hits of Marshall Bartholomew). Studio engineers didn't really yet know what they could do when working solely with a human voice so turning on the mics and leaving the room was pretty much all one could expect. Throw in a rudimentary percussion line and the group might even have been known as "cutting edge".

In the later '80s and early '90s, this same album probably constituted an average, respectable effort. Arrangements had grown more complex, studio techniques were progressing, vocal percussion was developing into an art form and an elite list of top-notch groups was emerging that distanced themselves from the rest with a tight blend, powerhouse soloists, and interesting arrangements of unexpected material. Still, as more and more groups popped up across the country, the learning curve still favored the inexperienced and many novice groups were turning out material on par with Songs from the Green Room.

Unfortunately, it's 2004. The many faults that plague this album coupled with the ongoing bar-raising in collegiate a cappella leave BBT in the basement of the standings. Pitchiness can be heard throughout the album, both between separate voice parts and within individual voice parts that are intended to sound unison (Africa feels flat by the 1st chorus; the sopranos' entrance in In Your Eyes is out of tune; the guys aren't together with each other on Down on the Corner — and that's just the first 3 songs), and far too often in the soloists (Kiss from a Rose and Shimmer to name just two). Not surprisingly, the blend suffers as a result, with the group often sounding like 4 distinct voice parts rather than a cohesive whole (a promo picture on the back cover actually shows the group singing in 4 distinct clusters, which worries me greatly if that is their standard arrangement for performances). The arrangements, as noted above, are primarily of the bass line + rudimentary percussion (by "rudimentary", I specifically mean a series of percussive sounds that don't always constitute a true drum line, as well as a distinct lack of anchoring kick drum sound) + 2 or 3-part harmony on "ooh" and "ah" + the soloist — in all, very very basic by today's standards. In a few select places, the chords utilized or the inversions thereof just sound flat out wrong (the opening of Under the Boardwalk is the most jarring example). Even the song selection is somewhat misguided as the group tackles mostly dated material (10+ years old or older) that has been done to death (and better) by dozens of other groups, and therefore suffers by comparison.

On the positive front, the best thing I can say about the group is that they are lucky to have their basses. One of them in particular — I can't tell if it's Sean Kane or Dan Gray simply by listening to the album — possesses a sonorous, legit bass and the dexterity to use it effectively. It's a large part of what elevates You Can Call Me Al from "weak" to "average" as the song relies so heavily on its bass line.

Mind you, I don't enjoy bashing a group that has clearly worked hard and invested a great deal of time and energy into an album. I realize the blood, sweat and tears that goes into any effort such as this one. But my mandate is to place the album in the context of a cappella at large: in that world, this album doesn't even make it to the Big Dance.

Did I step into some timewarp and get sucked back into some misbegotten decade? Or did fischerspooners's electroclash revolution really just warp everyone's mind into believing that it's actually 1984 and not 2004? When reviewing Company B's latest effort, I gave them props for sticking to their guns and performing songs from a distinct era, thinking that (1), it was refreshing to receive an album comprised mostly of songs from when I was in elementary school; and (2), since they were a niche group they knew what they were doing and why they were doing it.

Can't say the same thing about Gonzaga University's Big Bing Theory or their release Songs From the Green Room.

But repertoire is only a small part of the problem. Everything about BBT seems to be stuck at least a decade behind everything else going on today. The arrangements are average, not really striving to achieve more than the "doom-bah-dis" of yesteryears. The occasional "drumming" screams the need for a Wes Carroll/Jeff Thacher tutorial. The soloists and background vocals (very earnest and convincing in the Glee Club sort of way) lack the polish and sometimes the ability to control the songs they sing. Kiss From a Rose was particularly painful.

Believe it or not, BBT does have the potential to be a very strong group. The Glee Club musicianship can only make their musicality stronger in the long run. Strengthening those fundamentals (execution, blend, dynamics) while moving on to some more challenging material would help them rise to the top.