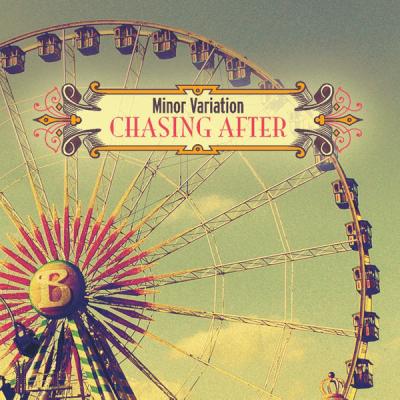 Returning from my 10-year hiatus from reviewing for RARB, my first album back is Chasing After. I really like this album, and it's a good one for my return. I like that the songs are generally "faith based" or "Christian", but they don't really hit you over the head with a message. It's more subtle. Not so "heavy on the Jesus", which isn't good or bad; it just depends on what the artist is going for. Personally, I think it's a nice level of religiousness, especially for anyone who isn't a Christian (disclosure: I am Jewish), and it's a work I could find myself listening to again. So Minor Variation opens itself up to be enjoyed by people of any faith, not just Christians. Nice.

On the arranging front, the group uses "zha zha" and "judda judda" for guitar sounds on a couple songs like Be My Escape. This doesn't really bother me as much as it might bother others. Everything else seems to flow very well. I really like the female vocal percussion on this album — good sounds and some very cool fast patterns, like in For Love of You. I'd love to hear more of the tom fills, as they're generally a little low in the mix.

There is very nice production on this album; I dig it. But I feel the solos are too hot in the mix overall. The solos sound great and have a very "present" and in-your-face vibe. As a result, the rest of the group sounds a bit far away. I like the solos to sit a bit lower in the mix than this. But there are some nice choices in where they go "dry" on the reverb and then bring it back. I might go shorter on those dry sections, but I do like the contrast and it's something I aim for in my own mixing. The mastering might have over-compressed the mixes a bit in an attempt for "more loud". This might have been a decision by the mastering engineer or the group or the producer; who knows. In general, the mastering sounds good, but there are a few times when the singers pushed for a crescendo and I can really hear the limiters kicking in and fighting against those crescendos.

The use of shifted bass is tastefully done throughout most of the album. It gets a little wacky during Good Life in the chorus, especially on the low F# and low B. I actually dig the sound (although it's distorting a bit even on my studio monitors) but those two notes jump out. Maybe it's more of an agogic accent (yeah, you like that?) and not actually a volume change, but it jumps out nonetheless.

The artwork for the album looks nice and is well put-together. There are very thorough credits for each song, listing all the publishers and even including "All right reserved. Used by permission." Although, did the group actually get permission? Paying compulsory mechanical licenses isn't exactly getting permission. It's cool either way, and I'm just nit-picking here. Maybe just saying "All songs licensed for use in this album" or something akin would be more correct. Also, for production credits, it's nice to include the name of the studio when listing edited/mixed/mastered by.

Chasing After is a very solid album from a well-seasoned group. It looks like Minor Varation has a handle on this thing and it's time to do something even more interesting on its next album. An original or two? Hmmm? Good, it's settled.

Minor Variation is an all-female group from Wake Forest University. Back in late 2010 I had the privilege to review their album Toward Home. In that review I commented on the group's natural sound, mentioning that Minor Variation used "minimal vocal percussion, no electric guitar effects, hardly any octavization of the bass line...". For the most part I quite liked their music, and at least it was a change of pace from the other heavily produced collegiate albums that I reviewed around the same time.

Fast forward two-and-a-half years. This version of Minor Variation has come out with a much more typical collegiate album: vp on nearly every track, and (at times) heavily processed vocals. It's a very different sound now. In many cases the production has led to a much more full sound than on Toward Home, but in other cases the energy has been sucked out of the performances — so this album is much more hit-or-miss. While there are many more "5" tracks (five compared to two on Toward Home), there are also many more "3" tracks (also five compared to two).

On the best songs, everything comes together well — the backgrounds are full, the soloist is energetic, and my attention is captured. During the songs that are more average, issues range from boring arrangements (Reasons Why, Make You Feel My Love), to harshness in the soloists' voices (Make You Feel My Love, Sweet Sweet Sound) and excessive diphthongs (Domine).

One thing that hasn't changed is Minor Variation's emphasis on spirituality. This shines through in a particularly nice fashion in the group's cover of Carrie Underwood's Temporary Home. The song speaks of the hereafter in general terms, but Minor Variation has added a section in the middle where they sing the first verse from the old Christian hymn When I Survey the Wondrous Cross. It's well executed and a touching reminder that, for them, hope in the hereafter rests on the One who died on the cross.

To sum up, the top five songs on this album stack up well against any collegiate album out there. As a result, I give this album my recommendation. If the other six tracks were as good, this would easily be a "must have" album, but as it is I'd leave the description at "a nice to have album" instead.

Minor Variation and producers Derek West and Brad Stephenson really "get" sound. The sonic palette on Chasing After is expertly conceived, with the group having an excellent sense of what sound belongs where. It's also a well-executed, inventive album.

Chasing After isn't the best-performed album of the year by any means; the solos are rarely anything above average, and there are moments where Minor Variation's singers fail to lock into a cohesive blend. What sets Chasing After apart from the average collegiate fare, though, is its spirit and flow. Song selection is superlative, with each song being appropriate for Minor Variation while still showing off the group's broad range, and there are no hopelessly overdone songs on the tracklist. The songs also transition nicely from one into the other; this is a well-conceived album.

Standouts on the album are the energetic and dancey Domine and the atmospheric Everything is Yours, which is a stunning opener for the album. These two songs show Minor Variation at its strongest, and at its most different; Everything is Yours is lush and diffused with reverb, while Domine is bright and in your face. Other songs on the album are similarly ambitiously conceived: For Love of You's backgrounds are just the right amount of processed, and Sweet Sweet Sound is beautifully stripped down with soloist Sonia Kuguru delivering the most powerful vocal performance on the album.

Unfortunately, Chasing After starts to lose some steam as it goes on. The last two tracks, Temporary Home and Good Life, feel curiously bland after the rather inventive arrangements preceding them. It's a bit of a flat ending, and it's a bit of a surprise considering how well the first 3/4ths of the album worked.

To order a physical copy of Chasing After, write to Minor Variation at: