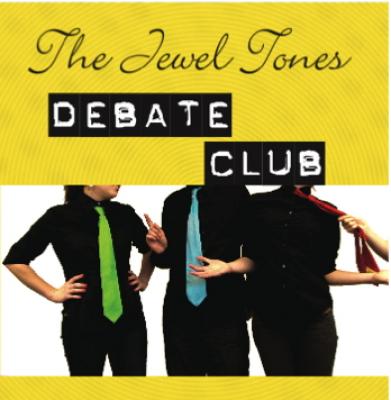 Debate Club is the latest offering by the Jewel Tones, a co-ed a cappella group from Marblehead High School in Massachusetts. Debate Club is a bit of an old-school album. The recording is very natural sounding, without a lot of modern production tweaks. The net effect gives one a very good idea of what it would be like to experience a live show. If you prefer an ultra-natural a cappella sound, then I recommend this album to you. Unfortunately, the raw sound doesn't really work for me, and it seems a bit below average compared to today's standard for a cappella albums.

Flaws in the soloists' voices, such as cracked notes in the highest sections of some songs, are very apparent. One of the worst places is the long held note on "keeping me do-own" at 3:05 in Gravity — really a bit painful. Another song where the tuning problems are quite evident is in Wine Red at about 0:20 and again at 1:10, where the female and male duet parts sound a little off from each other as well as the background parts. These types of things crop up again and again throughout the album — not usually major issues, just lots of small things. But it's frequent enough that I find myself wishing for a little Auto-Tune, perish the thought.

Similarly, the beatboxing demonstrated throughout the album would make for a good live performance, but lacks the kick and the complex rhythms that are often introduced through studio enhancements. The bass line in Stevie Wonder's I Wish is one of the few places on the album that sounds like some artificial punch has been added to the voice. That was likely a good thing, but when compared to, for example, a seven year-old collegiate version by the MIT Logarhythms (from album Soundproof), the bass still falls flat. Listening to the driving MIT version also helped me identify another key failing of this album, which is that most of the songs lack energy and don't convey the emotional messages of the songs.

Lest I fill the review with complaints, let me mention two things that make me smile. First, although the two songs really have nothing to do with each other, it makes me smile to have a cavalier, humorous King of Spain followed directly by the Police's somber King of Pain. Second, I think Chloe Rombach does a fabulous job with the solo in Mummer's Dance — a nice, light touch, sung perfectly in tune — as did the whole ensemble. It's clearly the standout song for me, and one worthy of consideration on a BOHSA album.

In summary, Debate Club makes me want to see the Jewel Tones in person. But it doesn't make me want to buy any more albums from the group.

The Jewel Tones of Marblehead High School is a group that quite likely has a lot going for it: Debate Club certainly shows a fairly well-tuned performance that would stand up alongside many college groups.

The problem, though, is that Debate Club often buries the group's strengths beneath a mediocre recording. On many of the songs, the backing voices are mixed too high, thereby competing with the soloist. Please Don't Leave Me is particularly egregious, especially over headphones, as every "jen-jen-bah-nen" seems even louder than the soloist.

A bigger problem with Debate Club is the group's energy and emotion. Soloists here seem detached. The leads on songs like Please Don't Leave Me and Gravity certainly hit all the right notes, but they just don't sound as though they're feeling the songs. The group's energy also lags, making songs like King of Spain feel really slow. Part of that may be due to the backing voices, which don't have the crispness or staccato that more successful versions of the song embrace. Wine Red also suffers from a lack of crispness; this is a song that should be really pointed and sharp. Instead, this version is too smooth, leaving behind a recording that just doesn't propel forward. Another reason for the low energy might just be concentration. The backing singers very often (Drive, Dreaming With a Broken Heart) sound as though they're focusing on getting every note right, without taking the next step to pull together a song that takes the listener on a journey.

There are a few really solid nuggets here: some of the phrases in King of Pain show nice dynamics that do a lot to help move the song forward. And the version of Mummer's Dance is haunting: the group really nails the nice extended legato phrases.

It may be tempting to give the Jewel Tones a pass because they're still in high school, but this album is truly a solid "3", through and through. It's no better (and also no worse) than most average college groups, which is certainly commendable: a listener wouldn't immediately pick out that these singers are so young. In fact, Debate Club's weakness isn't in the singers' voices at all, and while the album's biggest problems (poor mixing and a lack of emotional connection) might not be easy to fix, the Jewel Tones do have a solid vocal foundation upon which to build.

While groups like Kettering Fairmont's Eleventh Hour and Durham Academy's XIV Hours are busy raising the bar for recorded high school a cappella, the Jewel Tones of Marblehead High School seem to have been left behind. This is not to say that Debate Club is bad — far from it. Just a few short years ago, this album would have been a revelation, and it is quite good for a high school album even today. But compared to the broad range of a cappella recordings available, Debate Club falls firmly in the middle of the pack.

At least the Jewel Tones have the basics down. Everybody sings in tune, and the leads are well matched to their material. Where the group starts to get into trouble is the song selection, an odd mix of classics, indie rock, and assorted Top 40 from the last decade. While listening to this album, I didn't get the sense that the group cares about or even understands these songs. With hardly any emotion in the backing block, it just sounds like everyone is singing notes and words off a page of sheet music. Moreover, those backing blocks are just too loud, and soloists are consistently drowned out as a result.

It's a shame, too, because these kids really shine on the solo mike. I Wish features a fantastic scat solo by Ari Fodeman towards the end, but it's pushed so far back in the mix that you might miss it. Heather Gillispie is great on The Hush Sound's Wine Red, but more often than not she sounds like she's fighting to be heard over everyone else. Ryan Henrich shows rare maturity on John Mayer's Dreaming with a Broken Heart. And I would be remiss if I didn't mention the CARA-nominated Ari Conte and her gorgeous turn on Gravity.

The arrangements, mostly penned by director Amanda Roeder, are simple yet functional, never trying to be anything more than faithful recreations of the original songs. Please Don't Leave Me is fun and addictive, but this comes more from Pink's songwriting than anything the Jewel Tones decided to do with it. Every time you think it's building or going somewhere new, it pulls back. Likewise for Mummer's Dance: it's quite pretty, and soloist Chloe Rombach wafts over the high notes like a cool breeze, but each new verse sounds just like the one before it. Yet there are some fleeting moments of inspired greatness: the ethereal, all-female beginning of Dreaming With a Broken Heart; the soprano punctuation marks dotting Wine Red; and the breakdown before the final chorus of King of Pain.

Moments like these make me long for the album that Debate Club should have been. The photo on the back cover shows a group of excited young singers with real love for their music and for each other. If they can bring more of that passion into the studio, the Jewel Tones' next effort will surely catch up to, and maybe even surpass, the efforts of their peers.