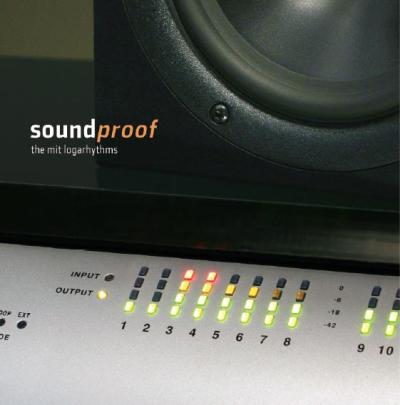 Slick new album from the MIT Logarhythnms. Great voices, careful production and a computer-saturated sound befitting students at the Massachusetts Institute of Technology. Really, I'm a little surprised the Logs haven't sent us an album like this before, given the school's legendary digital savvy. But previous effort Superlogs, while fun, still sounds like a geek hobby, not a geek takeover.

On Soundproof, the Boston boys are storming the walls. The album opens with a cappella standard Don't You Forget About Me, de-instrumented like you've never heard it before. The simple arrangements and cute, callow solos that surrounded this song in the early 1990s are long gone, replaced with a sonic wall about to overpower the source material. Newer repertoire follows, generally with a large degree of success.

I didn't like all the songs they chose, but I don't have too many quibbles with the execution. All the solos are good, and several, like Ben Maron on One, are eerie mimics. The group has some impressive tenors, possibly electronically retouched, which give the disc a practically co-ed sound in several places. From the bass lines to the high end, the group gets a big range and an impressive sound. The arranging follows a fairly standard pattern; sustained block chords, faint moving parts, and a percussion line. In general, I thought the mixes overplayed the sustain and underplayed the good bits, but at least you can always hear the solos. A few of the arrangements are doo-bop heavy, but the quality is consistent and the percussion keeps things moving.

Soundproof reminds me quite a bit of Code Red, The Beelzebubs' computer-assisted masterpiece of a few years back. But unlike much of the high-end production scene, the Logarhythms appear to be laudably self-contained. Instead of turning to Gabe Mann or Bill Hare, the group seems to have built its own studio and kept things close to home. Viktor Kray, recently introduced to me through a RARB forum thread, apparently recorded the opening track, which may explain why I find it more off-putting than the rest of the disk. Not knowing a thing about him other than what I've read here, I can't say for sure.

As collegiate cover albums go, this is one of the best ones. If you're intrigued enough to plunk down money, I think you'll get your money's worth.

The MIT Logarhythms have put themselves on the a cappella map with their latest release Soundproof. Idyllic blend, solid leads and smooth production give this collegiate all-male ensemble a pro group sound. As icing on the cake, the Logs put careful attention to matching the songs with the right soloists. The result is a near perfect score on repeat listenability. Soundproof ranks with the Hullabahoos' Jacked as one of the best collegiate releases of the year and one of the best I've heard in ages.

How the Logs got themselves their own recording studio, when other schools won't give a dime to their a cappella groups, I'll never know. But kudos to the Logs for pulling off the gift that keeps on giving. This version of the Logs creates a smooth, rich, punchy sound that truly enhances the effectiveness of the arrangements. With recallable effects settings and institutional knowledge, the coming generations of Logs can be expected to continue to deliver top quality recordings.

The studio was also a wise investment for MIT. There's no question that MIT's reputation for having a well-rounded student life can only be enhanced by having one of its premiere groups release a CD this good. In fact, this CD is the best defense to the claims that all MIT does is "tech" its students to death. Of course, the stories of MIT's famous "hacks" help lighten the school's reputation as well. Nonetheless, the aesthetic impact (though not the comedic impact) of this CD, though less mystifying, will far outlast that of, say, assembling a car on the roof of MIT's Great Dome .

Critique is just a matter of taste at this level, but I would have loved to hear more bass and VP in the mix. What comes through is terrific. But I wanted a few more decibels of crack in the snare and thump in the kick. I can only hope the Logs will leave themselves a reminder which reads, "Note to self: more crack." Ahem.

For real purists, the auto-tune might be a tad too much. For producers, yes, you will hear the rare artifact (e.g.: vibrato/warbles at the very end of some held notes). For general a cappella lovers, though, you really can't go wrong. Soundproof is a great release and an excellent addition to my iPod's "kickin a cappella mix". Buy it.

Soundproof, the latest offering from the MIT Logarhythms, is one of those albums that presents me with a serious quandary.

By all reasonable standards, the finished product of this album is A++, and I had little choice but to score all of the individual tracks as 5s simply because they easily stand up to the best that the other elite collegiate, and even professional, "cover"-based groups have to offer. Sure, some are "low 5s" (like Island in the Sun and Light in Your Eyes) and some are "high 5s" (like I Wish and Learn to Fly). And there are a number of soloists that are not entirely well-matched with their material (e.g., Don't You Forget About Me and One). But truth be told, everything is better than just "good". These tunes are so much better, in fact, that one could pretty easily come to forget that he/she is listening to an a cappella album.

And therein lies my problem.

(NOTE: Since I have given the group almost exclusively top marks, I have few qualms about taking the rest of my time to point out why this album annoys me to no end.)

Over the years, there has been much discussion about the impact of studio trickery and processing on a cappella music-making and, though I perhaps was an early opponent of such "cheating" (as I then thought it to be), the work of producers like Bill Hare, Gabe Rutman and others, gradually brought me around to the notion that such technological gimmickry had its place and could be employed tastefully and appropriately to enhance, rather than obfuscate, the quality of the performance.

Now it should be noted that the Logs literally built their own studio before recording this album and for that they certainly deserve hearty congratulations. But much to my chagrin, and perhaps as a result of having successfully undertaken such a sizeable effort, they seem to have felt the need to show off the fruits of their labors and avail themselves of the almost limitless potential that modern technology offers. In so doing, they have fashioned an album that feels almost robotic in its execution — the computer's bag of tricks having been substituted for the creative spirit.

Said lack of creative energy is probably most evident in the arrangements and in the treatment of the vocal percussion. In my review of its last album, I voiced the concern that the group's two most gifted and prolific arrangers, as well as its primary source of v.p., were graduating. Apparently, I needn't have worried. Notwithstanding his graduation in '02, David Kong takes solo or shared credit on six of the album's ten songs, and Karl Erdmann, another '02 graduate, takes credit for a seventh. Not really fair of me to criticize the source of the group's arrangements so let's just say that my concern for their future still exists and that a fresh voice would be most welcome.

As for v.p., the credit on each individual track is there but it seems almost meaningless given the "blob-like" treatment that's given to each person's efforts (think "Invasion of the Body Snatchers"). In all honesty, I would have preferred the guys to use a drum machine (a la The Nylons) because any individuality, or even humanity, that existed in the v.p. as performed by each guy in the studio has been lost in its translation to the listener.

Why is this such a big deal to me? Because as a result of the rock-solid anchor that their "processed-to-oblivion" v.p. (and bass) provides, quite a few, if not most, of the group's arrangements show a certain laziness. In an old review on RARB, Gabe Rutman once railed passionately against groups that insist on performing covers without contributing anything new to the interpretation of the song. What the Logs have done is taken Gabe's worst fears to another level. It's not just that the group has almost slavishly attempted to reproduce the arrangements of the original songs, making many of the tracks, though fabulously performed, musically only semi-interesting after the first iteration as the listener knows exactly what's coming. It's also that now the group doesn't even NEED to find creative solutions to the unique rhythmic, harmonic and/or texture issues that each song presents. Simply throw down a sampled, processed, and/or pitch-corrected percussion track and bass line and the "feel" is pretty much taken care of. The most egregious examples are the final two tracks of the album which, but for the percussion and the bass, feel as if they've barely been arranged at all. Mind you, they sound great, and mimic their source material faithfully, but what is the novelty and freshness of an a cappella interpretation if it brings absolutely nothing new to the table? Would we really want to hear a Mozart symphony, that sounds exactly like a Mozart symphony, performed by an octet of skilled synthesizer players?

Do I have any doubt that this album will be in contention for a multitude of awards come the end of the year? Absolutely not. Do I think Chris Vu is still one of the top tenor soloists on the collegiate scene? Absolutely. Would the average, less nit-picky, not nearly as curmudgeonly, a cappella listener probably think this album was just terrific? Yup, I think so. And still it bothers me. Ah well, that's my problem, not yours. Let the stream of hate mail begin.

Available from the MIT Logarhythms' website or through Mainely A Cappella.