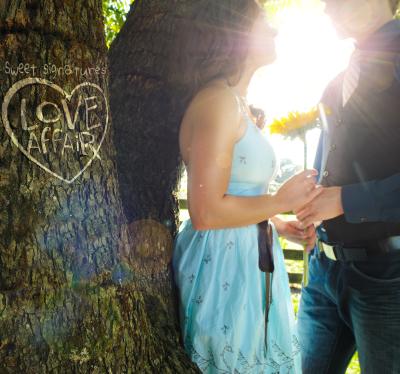 Some groups have forgone the album concept of creating a piece of work that has a unifying storyline and arc — they opt instead for a conglomeration of iTunes singles that make up most of the pop/rock oeuvre. The Sweet Signatures have definitely put considerable thought and concentration into their latest recording, Love Affair. And because of this adherence to artistry, the Sweet Sigs were nominated for the 2011 Contemporary A Cappella Recording Award for best collegiate female album. Kudos for the nomination! But more importantly, kudos on possessing the talent to create such an engaging album.

Love Affair is a strongly mid-tempo endeavor of some fairly common tracks, a few overdone gems from the female collegiate repertoire, and a sprinkling of new songs that are sure to become instant classics. The heavily R&B and pop-laden recording is an easy listen and showcases the various strengths of the group: pristine tuning and intonation, a robust bass section, fun arrangements, and driving percussion.

The opening of the album contains a strong one-two punch of yearning and release, telling the entire relationship story in six minutes and then unraveling the juiciest parts of the storybook romance of a pair of star-crossed lovers with the rest of the album. At the start, they fire it up with a sexy rendition of the Pussycat Dolls' version of Tainted Love. It's exploding with seductive energy and a camp factor turned up to ten. Bad Romance then grabs you with its gritty sass that talks of the power crazy obsession has over all of us.

The Sweet Signatures possess an infectiously pleasing sound; for lack of a better descriptor, it's ... well sweet. The voices are lilting when necessary, brash without being brazen, dark and luscious to great effect, and always full of emotion. I wanted to hate yet another recording of Mama Who Bore Me/Reprise, but it's a great surprise. The ladies deliver a hauntingly passionate performance with an ethereal quality that really brings out the pathos of the original. The second half doesn't rock as hard as Divisi's definitive version but more than holds its own with the beginning.

I wish that the group hadn't put the three weakest tracks at the end of Love Affair. I could have done without So Are You To Me, Everything, and Happy Ending. There is an easy thematic argument for their inclusion, but they simply don't stand up to the creative quality of the rest of the album. And who isn't completely sick of the cliché that is Happy Ending as the closing track? Oh well.

Get Love Affair and fall in love with the ladies of Sweet Signatures all over again or for the first time. It's a relationship that you don't want to live without.

Elon Sweet Signatures' Love Affair just sounds great: this is an all-female group that produces a warm, rich, full tone, and delivers it with energy. The soloists here are great as well; kudos especially to Kate Austin, who just wails on Used To Love U. Arrangements are good and well-executed (some done by group members, some done by outsiders — but the average listener won't be able to tell the difference). All in all, the album is an engaging listen with several standout tracks: Goodbye, in particular, absolutely rocks (hey, another kudos to Kate Austin for this kickass arrangement). And the whole thing just sounds good — not surprisingly, since Dave Sperandio's name is in the liner notes.

Still, with all this praise, I have mixed feelings about Love Affair. The Sweet Sigs is a group that sounds good and could deliver cutting-edge, fresh songs and arrangements, and yet a large chunk of this album has been overdone in recent years (Bad Romance, Used To Love U, Happy Ending) or done fairly famously by another group (Mama Who Bore Me / Reprise). The Sweet Sigs do a good-to-great job with all of these songs, but if you're the type of listener who would rather hear a good version of a new/unusual song instead of a good version of a song you've heard a million times before, then consider yourself warned. When the Sweet Sigs do venture onto untrodden ground, though, they do a great job: Go Ahead isn't the most often-chosen Alicia Keys song, but the group's version is both sultry and textured.

Musically, the group could use a few tweaks to grow from good to great. Show Me Love feels a hair too slow. Some of the rhythm at the beginning of Mama Who Bore Me / Reprise is a little choppy. And the soloist on Everything seems too low in the mix, fighting with the backing voices (especially at the beginning of the song). Overall, these are small nitpicks. Love Affair really does sound great, and if you don't mind hearing songs that you've heard before, it's an engaging and rewarding listen. These women truly deliver an energetic and compelling album; just because I know they're capable of even greater things doesn't negate that Love Affair is an enjoyable listen.

(Side note: the Sweet Sigs should learn the difference between "OPB" and "APB". Tainted Love was originally recorded by soul singer Gloria Jones in the 1960s. While the Sigs' version is certainly based on the Pussycat Dolls' cover of Soft Cells' cover, it is far from the original version!)

Love Affair, the latest from the Elon Sweet Signatures, is well done but it's just not for me. I can't really explain it; these are pretty voices singing good songs well, but in spite of some really nice points, there's nothing about the collection as a whole that grabs me and makes me take notice. Love Affair is certainly better than average, but I hesitate to call it "great".

Not that there aren't great moments here. The track list is a good mix of songs everyone's doing (Bad Romance, Used To Love U, Happy Ending), and unusual selections (Goodbye, Mirror, Blessing), and each has its own style. Kate Austin's CARA-nominated arrangement of Goodbye takes a forgettable pop trifle and makes it a driving anthem, showing off just the right combination of strength and sass. The track manages to be stripped down at points while still evoking a feeling of depth. Mirror sizzles with defiance, demanding to know: "Who are you to tell me that I'm less than what I should be?" Blessing handles the delicate subject of coming out of the closet, and evokes the religious elements of the lyrics through the arrangment, which is at turns thoughtful and transcendent.

Lest it seem that I'm only lauding the offbeat song choices, let's talk about Used To Love U. I really appreciate the way that the phrase "throw your hands up", which appears in John Legend's version as a sample, weaves through the background vocals, where every other cover I've heard has ignored this part of the original. This is a great example of how highlighting different aspects of an song can make a cover sound new and fresh while retaining the character that makes the original special. Frankly, I wish the Sweet Sigs had made more choices like it. Bad Romance, though well executed, doesn't stand out from any other version I've heard with the possible exception of an obtrusive clave. And by comparison to the highs of the album, Show Me Love feels underwhelming in everything but the solo.

So there is quite a bit to like about Love Affair, and the Sweet Sigs are clearly doing good work. Ultimately, the album ranges between moments of brilliance and songs which are merely acceptable, and that lack of consistency is what lands it firmly in "4" territory for me. But this is still better than much of what's out there, and it demonstrates that the Sweet Signatures have what it takes to rank among the very best.