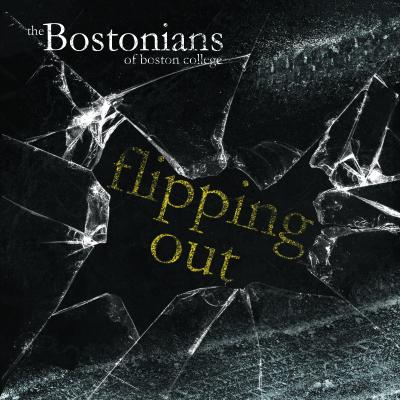 Flipping Out is a considerable achievement, the clear result of dedication and hard work. So what if half the album sounds like willpower and autotune — that'll get you a long way these days, and a lot farther than most people ever get otherwise.

There are a few things I really like about this album, and first among them is First Train Home. Great song, great solo by Kate Luskin, and great groove that improves on Imogen Heap's original melodrama. One of my favorite performances of 2010. I also applaud Alvic Plan for his performance of Ordinary People, a song that holds up well to overexposure, and Who Knew soloist Alex Geitz.

Then there are the generic bits. I am so over Viva La Vida and Boondocks: I know they're a lot of work, but I just don't feel like sitting through them any more without some compelling reason to pay new attention. Overall, this Bostonians album falls into that trap more often than not. Several of the solos sound aggressively autotuned, almost Cher-style when the song doesn't obviously call for that approach, and the beats don't always line up with the backgrounds. Crazy is the worst offender on that score, and this out-of-sync feeling makes it hard to enjoy the effort that went into this arrangement. Despite creditable singing, I'll Stand By You never gets its tuning together, and Bye Bye (a great song) never quite finds its groove. Meanwhile One is a lackluster cover of a lackluster cover, without the real-life Mary J. Blige to help out, and Shower The People has a vintage, late '90s a cappella sound, which is not exactly in vogue.

I was all set to call this a yearbook album, but a few factors raise it above that lukewarm label. For one, this is my 300th review written for this web site. In piling up that backlist over the last fifteen years, I've heard a lot of yearbooks, and it would be wrong not to point out how different things are now. The Bostonians, and so many other groups, are light years past what was possible in 1995. Yes, technology has become more accessible, but I think groups are also working harder and to a more professional standard. The polish required for a "run-of-the-mill", ok-sounding disc these days is, I think, a considerably bigger accomplishment than the garage band records my groups used to make, as hard as we worked and as much as we cared.

So good work, Bostonians. It's hard to keep up with today's blistering pace and higher standard. Your group keeps up and more.

It's amazing how so many a cappella albums — especially of the collegiate variety — sound almost exactly the same these days. The groups all cover the same types of songs, sample percussion the same way, and polish their tracks until they're stripped of any recognizable identity. Not that these albums necessarily sound bad, mind you; in fact, the growing problem is just the opposite. There's such an abundance of talent, both in terms of the singers and in terms of the producers, that everyone's reaching the same level of quality. So what is there to differentiate your group from the pack?

It's something The Bostonians need to figure out. Their latest release, Flipping Out, is one of the building blocks of that mosaic of sameness. It's a nice-sounding album. It's sung and produced quite well. But honestly, I've heard this all before. If they have access to these talent resources, why not put together something we haven't heard a million times over? Easier said than done, I know. But if you want to generate interest in your album — if that's your goal — you need to do something different.

If that's not the goal, then Flipping Out makes a quality yearbook album. It starts with a particularly strong effort on Viva La Vida, which features a nice, full sound and a pretty solid arrangement. But the album quickly regresses a bit and starts offering some pleasant but forgettable material. That's not to say anything here is bad, because it isn't. There's a good amount of energy throughout this record. The group also blends well for the most part, save for a voice sticking out here or there, and a few moments really stand out: One is a strong number and soloist Stephanie Orrico gives a passionate performance on the finale Band Of Gold.

Most of the other soloists, however, are of average quality. And often, the arrangements are repetitive or uninteresting. This makes it harder to come back to the album for a repeat listen.

Flipping Out is a bit above average among today's pool, but that's not quite enough to get it noticed. I wish I could be more enthusiastic about an album that has more merits than demerits, but the fact is, most a cappella albums these days have many merits. What I yearn for continuously is a group and an album with a clear identity and a fresh perspective. Are they out there? I sure hope so.

The Bostonians of Boston College have an average album with a few excellent moments in their latest release, Flipping Out. The middle of the road tracks (Viva La Vida, One, etc.) are all ones that I've heard before, and The Bostonians do them just the same way everyone else has. There are also a few tracks on the album that don't quite come up to par for various reasons. Angel Of Mine seems a bit sloppy on the production end, the soloist for Keep Holding On lets the listener down it parts — there's a need for more emotion and grit for a song like that — and Ordinary People comes off as boring and repetitive.

Now that I've taken you through the average, let's talk about the excellent. Boondocks is by far the best song on the album. The listener can tell that this is most likely the group's favorite song to sing. From arrangement to solo to the "bah"s in the background, this track is perfect. Matt Shineman, an alum who has three arrangements on Flipping Out, knew how to manipulate the original to do exactly what he wanted it to do for the group. I would also like to point out that the soloist, Chris Baxter, absolutely kills it. The listener can really hear that he has a connection with what he's singing about. Well done, Chris.

Flipping Out features fourteen tracks from artists of all different genres. While the variety is appreciated, I think what The Bostonians were lacking during production was focus. Instead of an average fourteen-track album, I'm willing to bet that if they had focused their vision, they would have produced a solid ten-track album. Nevertheless, a few of these tracks are excellent the way they are, and I applaud and thank The Bostonians for these additions to my iPod.

To order this album, visit the group's website, iTunes, or Amazon.