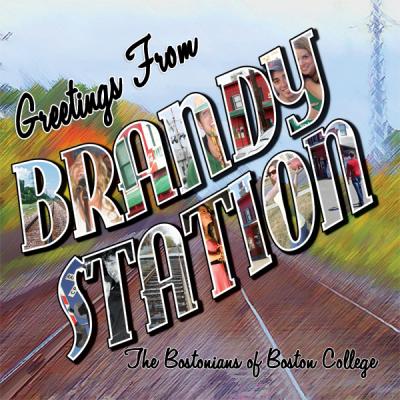 Pleasant voices dominate this new album from the Bostonians. It's a good lead quality; otherwise this album is fairly mundane. The tuning is okay but not great. The arrangements are fine. The solos are soft and fuzzy but don't really knock your socks off. The nice, sequenced vocal percussion is, well, nice sequenced vocal percussion. But it all adds up nice, and that's a nice total package to have.

Brandy Station is quite consistent — no big stinkers, nothing awful to single out and rip up. But that limits the upside potential, too. On repeat listen, I found some things to praise, so here goes.

Casey Girardi does a great job with the solo on I Will Love Again. Alex Chu's arrangement on Soldier's Daughter is a cut above and includes some neat, sitar-like faux guitar riffs toward the end. The Warrior is a nice opening track that introduces the group sound, and it also reassures the listener that nothing bad will happen during the playing of this album.

That's about it for the memorable stuff. Luckily, "pleasant" leaves a pretty good lasting impression.

The Bostonians celebrate their 21st year with the release of Brandy Station, It should come as no surprise that the CARA award-winning group featured on BOCA 2001, 2003, 2004, 2005 and SING 2 has a reputation to uphold. It's a charge they take to heart.

The Bostonians know that leads make the song. The lead talent is always above average. If they have a universal flaw it's that the leads never seem sure of how far to stray from the originals. For my taste, they are usually too imitative, but thankfully, the songs never come to the point of pure karaoke.

The production deserves credit for the Bostonians' all around slickness and probably a good deal of their accuracy as well. The powerful, octavized bass, artificially locked chords and sampled sequenced production all go far towards providing the precision and effect required by the Bostonians' song and arranging choices. It's a stark reminder (albeit unneeded) of how integral production is to a group's success.

Unlike many of their collegiate counterparts, the Bostonians almost always remember that nonsense background syllables shouldn't be overemphasized. Except for a few unfortunate moments, backgrounds do their job: they support the leads, providing texture and drive. It's a pleasure not to be subjected to constant "jen dohs".

The Bostonians prefer pop-rock over R&B, and they keep an up-tempo feel throughout. It's an enjoyable listen, though it's no great departure from the great majority of collegiate a cappella today. One can only imagine what a more original approach might yield.

It's a stretch to dig up a characteristic of Brandy Station upon which to base an album review. For two years, college a cappella albums have challenged me to find any difference between them. Most a cappella albums sound the same. They cover the same songs, they sing them the same way, the same listeners steal albums and ideas from each other. To the outsider, college a cappella groups must have no distinguishing marks. For you, dear reader, I will scratch and scrape at Brandy Station to claw out something of interest.

John Clark's machinations render Brandy Station to a very clean distillation. The album is crisp and clear, breathy yet warm. All rhythms align like cogs in a timepiece. The album is nicely balanced, with rounded bass and warm middle, and crisp highs and sizzly percussion. Clark is an artful engineer; his mixology is smooth and his production is modern. Few engineers achieve the tautness of a Clarkified bass line and drum kit.

Check the numerical scores: Brandy Station opens well, then fades. I held out hope that a 16 song album would finish strong, but it's obvious that the Bostonians should have left the later tracks on the digital cutting room floor. Brandy Station probably should have opened with Unwritten, a plucky take on all the takes that have come before it. The soloist's timing is immaculate, yet she manages to cram expression into the unclaimed spaces. Her energy is engaging and she sings each chorus differently — and better — than the last. The background is a variety of sonic textures: tightly wound vp with crisp tongue rolls, grindy bass, a scoopy alto on "ahhh". The bridge opens and grooves nicely, though it builds half as much as it should.

The Warrior is an ‘80s-style pop song and its female soloist gets it. She smears out her dipthongs just right ("civiliiized", "break owwwt"). She fills out the chorus nicely, thanks to many layers of her solo track. The song is fun, but I wanted more intensity from her in the choruses. Pushing harder on just a few of those extra solo tracks would have made the difference.

Soldier's Daughter opens with an alto country fiddle "down down" and responding bass "hummm". The trick belongs to either John Clark or the Bostonians, and I first fell in love with it on the group's Clark-mixed You Dance. The effect is instantly soothing, placing the listener in a mood to do absolutely nothing at all but listen, listen, listen and relish. The male tenor soloist, the best male on the album, sings with a clear voice and excellent phrasing. He soars and makes it sound easy.

Time, Fallen, Let Go, and Chariot offer nothing new from soloists or arrangers. Soloists evoke the original artists but don't surpass them. The percussion of Let Go puts the "machine" in drum machine. It's remarkably faithful to a synth drum sound, and I'd argue that, except for some uncomfortably close-talking "yah heys" in the bridge, the vp is this song's soloist.

Don't Leave Me This Way and I Will Love Again are the album's femme-fueled dance tunes. You'll hear that The Bostonians love singing Don't Leave Me This Way. A whole group "ahhHHH!" launches the mezzo soloist up an octave and into each chorus, which she sets ablaze. Her girlfriends highlight the chorus with unison lyrics at the end of phrases. The guys take a supporting role, filling out the lower background and laying down a tight dance bass/vp floor. An alto leads I Will Love Again, and her top notes sound tenuous. She falls off some top notes too quickly; she's not comfortable up there, and it shows in her phrasing and tone. But the background is behind her all the way, so to speak, and the song drives nicely with tight bass and drum integration and active arranging.

Stay (Wasting Time) is the best a cappella version I've heard, in part because the group nails the stuttery time signature and horn dissonances. The basses sing in a super low, guttural way; few males are this endowed. The drum kit feels sparse and controlled to my memory of this song, but the sounds are clean. The ladies get the "soul sister" act just right. The trumpet descants and horn stings are spirited. The song earns a "5" for its dynamism and salesmanship.

The album's soloists are good but not great. The women are more charming than the men, though they share the common trait of today's a cappella soloists: good voices, good style, shaky technique. The women, especially the altos, undersupport their higher ranges and the guys are less agile than their solos demand. Producers and would-be soloists will have you believe anyone can sing melisma, yet a drawn-in turn sounds as fake as intonation did when its use first became widespread. Fake female melisma (The Warrior) sounds worse than fake male-isma. An up close and personal miking strategy goes miles in helping out all the album's soloists; every singer's voice feels more intimate from a millimeter's distance.

Brandy Station is an album of the times, with little new material, few original ideas, and a mass of highly processed music that you can listen to if you want to, though you've heard it all before. An outsider to a cappella would find this album fascinating and fun. Insiders will enjoy the earlier tracks, but mostly it will sound all too familiar.