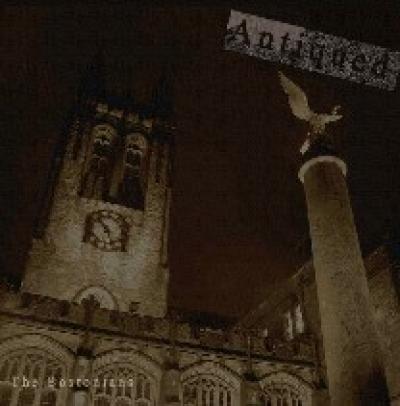 My, how times have changed. The Bostonians' latest album sounds great, nicely topping their not inconsiderable back catalog. But it's also pretty close to the average sound these days, given the vast improvement in collegiate a cappella over the past few years.

This album stood a little above the pack because of its nice solos, lovely layered arrangements, and periodic wonderful touches of texture. I loved the intro to You Dance, the finish to Standing Outside the Fire and the overall shimmer of Turn Off the Lights. I also enjoyed the driving pulse of Holding Out for a Hero and Amy Buchwach's solo on BOCA-selected Breathe.

But the album wasn't a steady string of winners. Many of the songs feel a little disconnected, like the different vocal lines weren't fully merged into a complete song. This effect was pronounced when heard through my fancy new headphones, less so through a pair of old-fashioned stereo speakers. It jarred my interest and knocked the album out of the running for this year's top tier. Rushing was another consistent problem — several of the songs felt ahead of themselves, never quite gelling into a groove. Amsterdam is exhibit A. The song starts too fast, slows down to a great tempo about halfway through, then speeds up again and starts to loose itself once more.

Antiqued has a few sonic curiosities worth mentioning. The percussion features what sounds like an uber-processed snare kick, mixed liberally with more standard VP bass drums and cymbals. That snare was both cool and a little out of place, since everything else on the disk retained a clearly vocal quality. The Bostonians have a clean but definitely vocal sound — no Code Red-type synthesizer impressions or smoothed out, Off the Beat-style texturing here. This quality may or not explain why this album sounded to me like a women's a cappella album, despite its abundance of male solos. The bass lines here sound similar to what the best chick groups are doing with octave doublers, and male timbres are hard to hear in the prominent upper voices.

Anyway, this is a nice album with some interesting moments and a generally respectable showing. Congrats to the Bostonians for keeping up with, and slightly ahead of, the times.

Damn you, you kids these days! All you moneyed college groups are making life difficult for we RARB reviewers! What's happened to bad pitch?! Where did all the bad blend go!? What about sloppy rhythms and cutoffs?!

How am I supposed to review album after album of musically correct music?!?

Back in the good old days, back in… (ahem)… 2002… back when I started this gig, every other album had HUGE flubbed notes! Vocal percussion sounded like a homeless guy trying to hack up a slug! An album with high falootin' "studio effects" meant it had a few seconds of distortion or flange! Back in those days, it was go big or go home! Go for broke! Sing your ass off, lose your voice, do another take! Damn the torpedoes! And that was how we liked it, by God, and anyone who said otherwise could burn in hell!

Now? Now it's hard to find a wonky pitch. It's damn near impossible to hear a rhythm that's off. With nothing technical to critique, my ears are getting soft. I can't believe I'm saying this, but I actually have to listen for — you won't believe it — things like originality! Creativity! Interesting arranging! Emotional performances!

And that's where most of you kids today, with yer newfangled John Clarks, Dave Sperandios, Bill Hares, and Gabe Manns, blow it. Maybe you single-track at home on GarageBand or ProTools or Cubase. Maybe you mix everything yourself. Or maybe you fly your music director and a hard drive across the country to a ProTools-compatible a cappella boutique studio. But most of you miss the point — a cappella singing should be fun. Fun to sing. Fun to hear. Seen t-shirts that say "Cover Bands Suck."? It's true. And what is 90% of a cappella if not voices covering bands? Unless you elevate mimicry to a new level or through a new means, unless you bring a truly new perspective to a song, you are nothing but a cover band. And not even a band, because you don't even play any instruments.

Bostonians, you are not alone. Lots of groups sing Guster, giving the solo to the guy who sounds most like that Guster guy whose name no one knows. Of course that Michelle Branch tune simply must be sung by the cutest, girliest sounding girl in your coed group! And Garth Brooks — c'mon now, fellas, you just gotta' sing that the way Garth woulda' wanted it. So it should be no surprise to any of us that the soloist on that Nelly Furtado song sounds like… And the Madonna song sounds like… And the song by that Mraz guy whose boring, repetitive song is only still on the radio because of the fascinating spelling of his last name sounds like…

Just when I began the thought, "art is dead", I heard a song I'd never heard before. You Dance, arranged by John Clark (yes, that John Clark). How neat! Nice humming, smooth as buttah blend, really breathtakingly beautiful chord building. Crazy raspy/drumlike effects on the vp. Gorgeous solo voices well-suited to this lovely ballad. This song is really worth hearing. Just beautiful.

Queen!? Keep your eyes peeled for overdone and typical! Only, at long last, it wasn't Queen's. It was The Bostonians', and it was the only song on the album that didn't sound pretty much like I'd expect it to. An alto soloist and bubbly femme background establish a show choirish feel, not rock opera. Keep experimenting, gang!

Oh wait, the soloist on The Cranberries' Dreams was way operatic. Didn't see that coming, and I kind of liked it. Too bad the arrangement was so watered down.

Lastly, Madonna's "Open Your Heart" was remarkably dead-on '80s. Hence the remark. The percussion was perfect electronic drum pad and the background suitably effervescent. Impressive considering none of these Bostonians could possibly remember hearing it on the radio in 1986.

A final note to The Bostonians. I'm sorry. You had the bad luck of being of being the album that released some gestalt. I'll have to rely on my fellow reviewers not to snap, providing a more in depth review. Please take solace in your numerical scores, which show you to be quite a lot like everyone else in a cappella these days.

Antiqued, the latest album by the "Bostonians" of Boston College, looks very sleek and has lots of sonic goodies that the group should be proud of. However, there are also a number of things that keep it from reaching a higher level of recognition.

I am at loss for why an album named Antiqued has pictures of Gold Medal Flour and what looks like someone getting hit in the face with pizza dough in the insert. Of course the flour might have gone into the cake hiding underneath the CD well with the message "The Bostonians, we don't s*ck". Um, good for you? The song choices aren't consistently old enough to warrant an "old" theme. Ah, inside jokes…

John Clark does most of the production with a little help from Min-Kyu Kim and Ed Boyer. They do a great job supporting the "Bostonians" sound without overshadowing them in studio effects.

The soloists are for the most part really good. Meg McManama opens the album on Holding Out for a Hero with a solid belting solo with appropriate softer parts in the opening verses. Amy Buchwach is a perfect choice to sing Michelle Branch's Breathe. Dimitrios Kotsinonos provides a gentle but heartfelt solo in You Dance. His solo and John Clark's arrangement make this one of the strongest songs on the album. It isn't often that an a cappella cover makes me want to find more music by the original artist but I will be listening to EastMountainSouth to see what else they have to offer. Open Your Heart is the second strongest song. The Bostonians nail the feel and the production perfectly supports the singing.

There are some downfalls to the album, though. Standing Outside the Fire doesn't explode in the choruses the same way I expect it to. There are too many people singing during the verses and not enough activity during the choruses. Somebody to Love sounds too happy and doesn't quite capture the message of the song. The soloists numerous glissandos near the end spend way too much time on the tense note before sliding up and seriously detract from the song. A random excerpt of "I Want to Ride My Bicycle" doesn't help either, since it doesn't emphasize the lyrics and there isn't enough of it to consider this a Queen medley. If I Am has some slight reharmonizations that makes the song awkward to listen to if you've ever heard Nine Days' original version. The bass is the only voice altered leaving the unadulterated upper voices to act as tensions in the new chords. This makes the arrangement sound too close to the original and the bass line, although well sung, to sound like an accident more often than not.

All in all, there are some great moments rhat would be worth paying for and some moments that aren't. But the Bostonians are definitely on their way to cutting a "must have" album, and I can't wait to hear it.