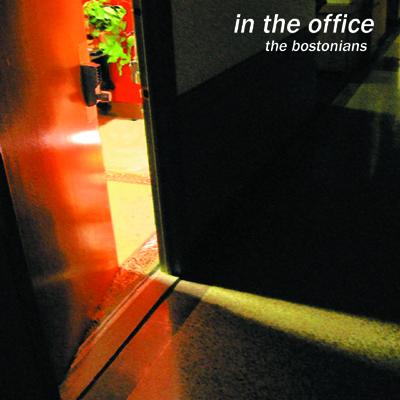 The Bostonians got a lot of things right on their new album. The solos are good, as is the percussion. The production is tasteful. They start the album properly, with their best two songs. This is an effort to be proud of.

In The Office endears with its array of pleasing components. The tuning and arrangements put The Bostonians solidly in the middle of the collegiate pack. But their array of smart decisions makes me want to praise their successes instead of dwelling on where they come up short.

Beautiful Day is a great opener. It's one of the best-tuned songs on the album and definitely the best rocker. I love the alto belt over the chorus, and the layering in the arrangements. Troubled By the Way We Came Together is a nice follow-up, a change of mood that doesn't sink the energy level.

Farther down the disc, things start to splinter a little bit. The arrangements often rely on parallel octaves, where the basses and the sopranos aren't quite in tune. On other tracks, like the joyful Center of Attention, none of the parts are in tune with each other, as though they were recorded at different times at deliberately offset pitches. It's a cute song, with fabulous rhythm, and the solo, duet, and background are practically an even quartertone apart.

But things never go completely to pieces, another point in The Bostonians' favor. Their version of Billy Joel's Lullabye is sweet and sincere, and the last two tracks wrap the album nicely. The overall effect is like a soft-rock radio station — the songs range fairly far afield, but they are all sweet-tempered, and nobody gets too far off the reservation.

It's a nice album, In The Office. The Bostonians have a good grasp of the fundamentals, and it's up to them where they want to go from here.

The Bostonians of Boston College have moved their group in the right direction with their new release, In The Office. Almost everything that I didn't like about their previous effort, Quarter Past Nine, has been improved and then some on this album. The group has got to be thrilled with the release of this album.

Female soloists ... wow. Karleen Green, Stephanie Wolfe, Meaghan Mullholland, and Katie Anson-Chapman are all as solid as they come. I even liked Diane Macedo's lead on My Love Is Your Love in some weird dance-your-butt-off kind of way. The most disappointing female lead was my favorite from their previous album, "Real World" alum Lori Trespicio. I'm not sure what happened, but she just missed on Visions of Love . I think it partly sounded weak to me because of Karleen Green's background vocals that just simply out-powered Lori. I'm sure she's still great, she just didn't capture it on this album.

I wasn't crazy about the bass management on this album. Instead of a crisp bass effect for the foundation of the sound, it sounded like a muddy, sloppy bass orgasm. I'd like to see The Bostonians pay much more attention to the way they arrange and produce their bass lines in the future.

All of the arrangements on this album were well constructed, though it's hard for me to say much about the arrangements when I don't know all of the original songs. Sure, it's easy to listen for the technical aspects of arrangements (voicing, syllables, and movement), but it's the creativity in arrangements that I love, and you can't really compare that when you're not sure about the original. The most notable example of this on this album is in Troubled By the Way We Came Together. In the chorus, when the soloist sings "Stray" (at 1:11 the first time) the bass/vocal percussion comes back into the arrangement and just creates a perfect sound for this song and group. Major kudos to The Bostonians, whether it's a creation of your arrangement or not.

Mike Fasano. This kid is fantastic on Superman. I've heard about a billion (mild exaggeration) college groups sing this song on albums over the last six months and nobody has brought it the way that Mike does. He has such a pure tenor one voice with such subtle and effortless control. Even with all of the amazing female soloists on this project, to me, Mike produced the best lead on the album.

The only two tracks that just didn't seem to fit into the scheme of the project for me were These Dreams and Lullabye (Goodnight My Angel). They felt out of place and probably could've been left off completely or replaced with other songs.

Overall, this is an outstanding effort. The more you listen to this album, the more you're going to enjoy it. It's not the must-buy that they're capable of producing, but it's still a very good album that would be a welcomed neighbor in anyone's a cappella collection.

Like Mandy Moore, Janet Jackson, and Britney Spears, In the Office is a pretty package without much substance. The album is a load of well-polished plain vanilla white bread with only a few glimmers of personality shining through.

The Bostonians favor a silky-smooth, liquid arranging style. Most songs have active rhythms in the background and pure vowels paired with interesting consonants. Rather than choosing to nail power chords, The Bostonians have opted for perpetual motion. Sometimes, though, the flowing arrangements become almost overactive, distracting from the soloist (Buddy Holly, I Wanna Be With You). The group's singing is on pitch and well blended (of course), but most of the arrangements don't build tension or excitement. Strong soloists could make up for the lack of energy. Unfortunately, soloists are not a strength of this album. The overall effect is that each song is on pitch, on tempo, well mixed and … well, not terribly exciting.

Most soloists are uninspiring. Many of the female voices are sugarcoated and pretty, but most are run-of-the-mill in voice quality and classically trained to the point of stereotype. The guys don't do much better, though the soloist for Superman delivers a heartfelt performance and has easily the most interesting and beautiful voice on the album. The soloists on Center of Attention aren't spectacular, but the quirky arrangement and awesome percussion clucking/popping add some desperately needed character. Vision of Love is pretty basic, but the soloist's sultry voice and convincing energy rescue the song.

The Bostonians make full use of studio magic on the album, flavoring many songs with well-used effects, equalization, and fully EQ'ed bass and vocal percussion. Beautiful Day is an impressive combination of active collegiate arranging and studio effects, while Troubled By the Way We Came Together uses minimal effects to great impact.

Despite a few strange judgment calls in the mixing, the studio work is good. The group used effects well throughout the album, supporting its liquid arranging style with liberal doses of reverb and delay. There are isolated cases where overused delay distracts from the solo (Can't Fight the Moonlight, Vision of Love). The kick drum is too prominent in Center of Attention and Someone To Call My Lover and is unnecessarily hyperactive in My Love Is Your Love. Strangely, Center of Attention seems to have been mastered much louder than the rest of the album.

The vocal percussion sounds are so consistent and on rhythm that I thought they were sampled and sequenced. The Bostonians informed me that 99% of the percussion was tracked live, which is impressive.

With In the Office, The Bostonians have shown that they can package an album in which very little is musically wrong. In polishing each song to a shiny gleam, the group has sacrificed the emotion and feeling that inspired some of these tunes. Any group that can get the music right as well as The Bostonians is capable of taking some more chances and pouring some soul into their next studio recording.

In The Office is available for credit/debit card purchase through the Bostonians website.