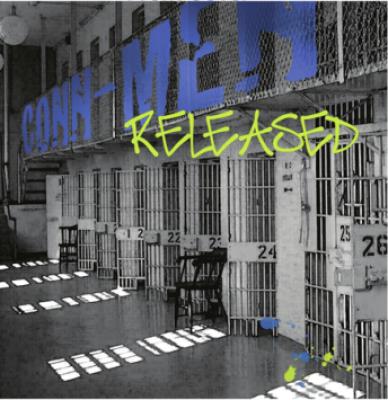 The sound of The Conn-Men's latest album Released is one I'm getting more and more familiar with these days. A strong all-male ensemble, engineered well, but brought down by occasional sloppiness and weak live material. These guys have the right of it, and they've got good people behind the board, but they are strongly limited by their arrangements and, perhaps more importantly, by the limited scope of vision being brought to the table. It is, more succinctly, average.

I am reminded of the last Buffalo Chips album I reviewed (City in Stereo), or perhaps the sound of CDN. Both great live groups, whose power in concert hasn't yet been accurately transferred to recording. What those groups have in common with the Conn-Men is that you can hear how badly they all wanted to get the recording right. Everything is in tune and on the grid, but there's a distinct lack of fun — a sense of missing exuberance, lying just beneath the surface.

What's missing is that the Conn-Men (and groups like them) need to identify what it is about their live identity that's appealing, and then figure out ways to accurately translate that in the studio. Long gone are the days when it was enough to just do your performance set really well in front of mics, and then edit the thing to perfection. Now we want to hear what sets you apart from the hundreds of other groups just like you.

Getting back to Released, consider the arrangements. Hey Girl, with its power "ba ba" backs is probably a great live number, allowing the group to rock out on nice big open man chords. However, put to record and entirely devoid of live charm and energy, it just sounds cliché. Worse, verses one and two are essentially identical, and the group does nothing to differentiate the two with anything in the arrangement. Again, it probably works live where the lead can serenade an audience member. Here we only have the sonic image to entertain, and the guys leave us hanging.

In the absence of an entertaining studio sound, the listener is more likely to pick up on the subtle imperfections scattered about the album, and that's where Released takes a turn from average to a bit below. Groove is a problem for this group. Listen to the verses of All For You where the tenors rush the beat, or Future Love Paradise where the lead can't quite lock into the laid-back tempo. These are nitpicky things I'm not even sure I would notice if I were more interested in the music. Unfortunately, these are the things that become more apparent when the energy and fun aren't there to distract.

I'm being hard on this album because I have a strong sense that the Conn-Men can do better. Their soloists are solid, and despite occasional background blips, their group singing isn't bad. Producer Dave Sperandio peppers the album with neat effects in an effort to enhance the underdeveloped arrangements. He shouldn't have to try so hard. A stronger sense of group identity, expressed in part by more interesting studio-developed arrangements will help propel this group up from average.

The Conn-Men are here, finally! They've been around since 2001, and this is the first album they've been able to release since their inception. It's well done, and easily better than many of the first efforts I've seen. That said, it takes more than being a debut to be a truly excellent album.

I'm not sure why, and I'm not sure how much convincing it took, but I'm excited to see a nine-song album from a new group. Many groups think they need to throw as much music out there in the world as they can in hopes that people notice them. The Conn-Men took the opposite route and took what I assume was the group's nine best songs, polished them, and recorded them to show the group off in the best possible light. This was an excellent decision.

The song choice area itself, however, seems haphazard and a bit uninspired. Sister Hazel's All For You falls into a similar category as the Spin Doctors' Two Princes: it's been done, and is very one-dimensional. Similarly repetitive is the O.A.R. cover Hey Girl, which I lost interest in by the recap after the bridge. Other songs like Comin' Home Baby and Because are collegiate a cappella standards at this point, and the arrangements bring nothing new to the table.

Shining through the mostly average tracklist is Come Around, a song almost entirely supported by Joseph Bates' bouncy, grooving arrangement. It's the only one on the album that really has a hook to it and while the Conn-Men sing it admirably, I give it a "5" with reservation. I like to see debut albums that do their best to show off the fact that this group is talented and worth keeping up with.

That said, there are two arrangements by Jeff May that stand out: Never Tear Us Apart and A Change is Gonna Come. Both are remarkably singable in contrast to the utilitarian and one- or two-dimensional arrangements on the rest of the tracks. They're not incredible or jaw-dropping, but they catch your attention in ways that the rest (with the exception of Come Around) don't. One Of These Nights has similarly interesting motives, but the incredibly long and repetitive outro keeps it from reaching the same level as May's other two arrangements.

Most distressing on this album is the lack of an arc. With nine songs, the Conn-Men had a chance to put together a moving album that pulled you along. Instead, it moves more like a drive over speed bumps. Future Love Paradise's groove is negated by the saccharine "bah digga bah" of Hey Girl, and any momentum built by Come Around is likewise sapped by the similar boppy All For You. I wanted to get to know this group over the course of these nine songs. I know they're here, and I know that they're a bunch of dudes who sing. I don't think this is all there is to the Conn-Men, and I want their next album to tell me what they're really like.

The UConn Conn-Men's latest release, aptly named Released, is chock-full of a whole lot of "ehh". While both the actual singing and production on the album is pretty good, the song choice and arrangement style is pretty dreadful. The best possible way to describe Released is that it sounds like a re-mastered album from a guy group in the early 90s.

The singing is fine. The production value is pretty good. The arrangements (and song choice) are absolutely what kill it for this album. Full of "ba ba ba"s and "doo"s, these songs are seriously straight from early 90s a cappella. It's all around very juvenile.

There are two not-terrible-actually-pretty-good tracks on the album. Come Around, originally by Marc Broussard and arranged by the wonderful Joseph Bates, is by far the best track on the album. Bates gave these guys a gem with his arrangement. It's creative, it's diverse, it's musically challenging. This track really shows off the pipes that these guys have, and if it hadn't been for Bates' arrangement I would have had no idea they could rip like they do on Come Around.

Their take on Comin' Home Baby is also not-awful. There's such energy present in this track. The arrangement is actually very creative, the soloist kills it, and the percussion sequencing is absolutely perfect. These are the types of songs the Conn-Men should be covering: high-energy, soulful songs. No more of that old-school pop crap for these guys — they're much smarter than that.

Unfortunately, two tracks are not enough to save the Conn-Men from their stale, boring, and out-of-date fate. A cappella music has lately been elevated to such a standard that it's hard for collegiate groups to keep up. Groups can no longer rely on just being entertaining; they have to be "smart". There are two choices for the modern day group: be badass or be musically brilliant. Based solely on Released, The Conn-Men are neither of these. Had this album been released perhaps fifteen years ago, I might be humming a different tune, but in this day, Released simply does not meet the bar.