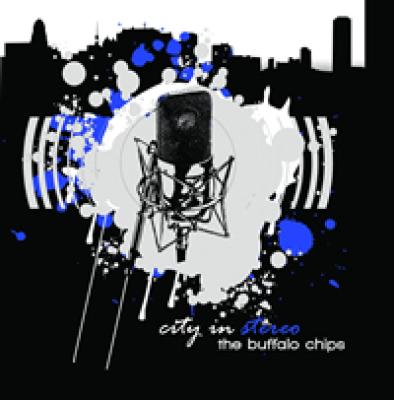 City in Stereo would be a much cooler album if it didn't sound so darn safe! The Chips came up with a neat track list, sang it all pretty well, but left all their heart and soul at the studio door. This album sounds snapped to a grid. Of course I'm sure it is, as are many albums these days, to compensate for poor timing and performances that just aren't quite up to snuff. Still, it's rare that I can hear it to this degree. It's a very clean, bright, pretty sound, and one that works much better on some songs than others.

Perfect example: the harmonies of Justin Timberlake's What Goes Around. The voices intrude from nowhere, loud and static, as though they were part of a MIDI track and this was their moment. Instead of being a sincere part of the song and feeling like a natural progression of the action in progress, they sound foreign and almost non-human.

This is not to say that this album lacks energy. Anything but! The Chips have a ton of excellent energy, and they do themselves a disservice by often holding it back and making themselves sound too perfect. Real performance energy is a little wild, and it's okay to let a little of that imperfection color your sound even while you're trying to present an idealized vision of your music. That color is suggested here, but mostly absent.

The funny thing is, I don't think the Chips need as much editing help as they took advantage of here. It's clear that they can sing, and tracks that are designed to sound more natural (It Don't Have To Change, which I don't think is actually live, but sounds it alongside the over-edited work) are actually well phrased and quite well done. More of this sound would have been welcome on the rest of the album as well.

A word about the Chips' arrangements: they're good, but tend to draw attention to awkward and sometimes overly complicated syllable patterns. Take for example Viva La Vida, a very enjoyable track that opens with a very dorky, in-your-face "jem deh jah ga deh deh jah doh doh", or Everybody Runs which kicks off with a big, bright, blocky "jen sa dooooooh doh". I got some very good arranging advice once: never try too hard to make yourself sound like an instrument to the point where it distracts the audience from the meaning of the song you're singing. I would offer the Chips the same advice. Sometimes being less active with your syllables can be a more appropriate choice for a song.

Despite my many little quibbles, City in Stereo is an undeniably good album from a group that can most certainly sing. Whether or not you'll enjoy the music depends on what kind of aesthetic you're looking for. If straight-edge, earnest male a cappella is your thing, City in Stereo might just be your new soundtrack for life. Personally, I look forward to hearing what these men can do when they can bring the heart to match the guts.

If great choices can elevate otherwise competent efforts, it stands to reason that poor choices can inhibit them. City in Stereo, the latest from The Buffalo Chips ... Well, you know where I'm going with this.

The album leads off with a stilted rendition of Apologize. Robotic phrasing deflates the soulful energy of the original, and the digitized pseudo-Latin percussion sampling gives the backgrounds a karaoke feel. Presumably, these innovations comprise an effort to distinguish this One Republic from many, many others. But that argues against covering the song in the first place.

The Chips follow their opening track with a much stronger cover of What Goes Around..." The breakdown, in particular, takes advantage of the group's full sound. But the song is so stylistically similar to the opener that the listener is numb to the laid-back pop vibe. Neither track has the sort of boldness you want to kick off your album.

Why not lead with Cold As Ice, a nifty arrangement of a seldom-covered track that features the best of Michael Donohue's many commendable solo efforts? And why conclude with Viva La Vida, a song that inherently sets up the listener for more material, especially when a ready-made concluding track (It Don't Have To Change, which even concludes with manufactured applause) appears five minutes prior?

And, really, everything is wrong with Time Is Hysteria, the Muse medley. The transition between the tracks is contrived and plodding, reminiscent of those film medleys favored by varsity bands and choirs. The introductory bass-line is awkwardly mixed so as to preserve the original syllable underlying the effect. Donohue performs the lead throughout, and his reserved, pitch-perfect tenor is particularly ill-suited to the Hysteria interlude. For that matter, Muse's work is particularly ill-suited to medleys.

Oddly, there is another, superior Muse cover on the album. Starlight features a great arrangement, a spot-on solo by Briggon Snow, and excellent production. Time to check Muse off the list and move on to Radiohead, no? There are also two Coldplay and two John Legend numbers. Considering the redundant opening (essentially two Timberlake numbers), the album feels like two EPs melded into an album.

Oh, and the cover art is dated and confusing.

Some of these issues could be addressed if other members of the group took more ownership of the material. Donohue is doing everything here, operating without a safety net. His arrangement style, for example is distinct and effective, exhibiting a mature compositional hand in general and a great sense of when to use block chords (or not) in particular. But someone else needed to step up and just say no to the syllable choices in Viva La Vida.

As well, someone needed to nudge the production beyond the wall of sound and driving bass/snare ensembles that overwhelm tracks like White Shadows and This Is How A Heart Breaks. For all its professional sheen, City in Stereo can be a chore to muddle straight through.

Simply put, City in Stereo is an album in need of some tender loving care. With the Buffalo Chips, the pieces are here for something really great. It is incumbent upon them to make really great happen.

The Buffalo Chips are status quo for the collegiate a cappella of today. Tuned, decent re-makes of the original, and not one ounce of originality. Don't get me wrong, they sound above average to good on City in Stereo. If you like listening to a cappella that is non-offensive, yet solid, this is the album for you.

Cold As Ice? Yawn. I love the '80s, yet there's nothing here to hold onto. Apologize has a nice contemporary sound to it, but what about it makes me want to listen to your version instead of the original? I couldn't find anything.

The Buffalo Chips fare better on tracks like Split Screen Sadness and Heaven that showcases a smooth and mellow men's group sound like New Edition. When they kick it old school and use "oohs" and "ahhs" in their arrangements, it draws me to pay attention and appreciate their voices much more than a straight transcription of Justin Timberlake's What Goes Around. When the Chips sing in this style, it doesn't matter that the arrangement is simple because the human voice has a unique beauty to it that will draw the listener in. In order to be successful in the more contemporary style you have to present a journey to your listener that is unique in comparison to the 300 other collegiate groups out there performing in the same style. Production of this kind is average nowadays, so you've got to impress in other ways.

This Is How A Heart Breaks attempts to break the mold of the preceding seven tracks and you can hear some creativity at the arranger's table. This is a track that grabs my attention even if the soloist is blah. It has a unique energy and feel to it different than the original. These types of arrangements are what draw people to a cappella. Unless you've got a professional sound engineer with professional gear for your live concerts, spare me the straight-to-the-eighth-note re-makes of the Billboard Top 40 hits, because there's not enough else going on to make me want to keep listening. It would be impressive if groups could sound like this live, but the reality is almost none of them have the resources to recreate the sound they are parading around on their recordings. I'm not saying they shouldn't have fun in the studio and experiment with technology. I'm just saying they shouldn't offer a one-trick pony and expect to keep vocal music lovers satisfied. We see what you're doing and we're not impressed.

The live-sounding track It Don't Have To Change by John Legend is a refreshing sound, even though I don't think it's actually live. One thing of concern to me from a programming aspect is having multiple songs from the same artists. Multiple Coldplay, Muse, and John Legend make for a less-than-intriguing listen unless you're a true fan of those artists.

If you liked their re-make of Coldplay's Viva La Vida as featured on BOCA 2009, then you might like City in Stereo because this style mirrors much of the rest of this album (although Viva is more polished). Personally, if the arrangements are going to be boring, I'd rather listen to "oohs" and "aahs" than "zums" and "dens", all things being equal. The bar is rising in collegiate a cappella and production is not getting groups over the hump anymore. Just like in fashion, things usually come full-circle though.

Here's to hoping groups start investing more time in arranging instead of riding on the coat tails of their engineers. This aca-head is bored with the current state of a cappella music. I need more substance in my music.