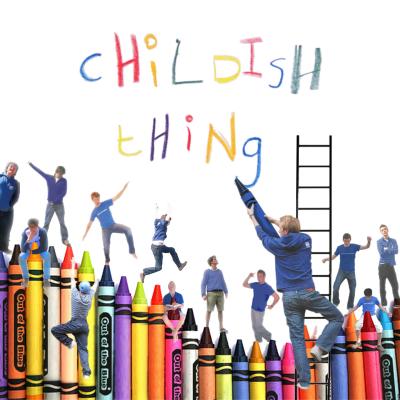 Ten Things I Love About Oxford University's Out of the Blue:

Yes, Out of the Blue is a collegiate group. But unlike so many of their peers, they do not confuse singing all the right notes with actually interpreting music. They show patience, expressiveness and creativity in their arrangements. And where so many slick computer creations leave us with simple, frigid accuracy, Out of the Blue warms us to the core with genuine emotion.

Childish Thing has its imperfections. Some pitch and blend inaccuracies do make it through. Embarrassingly, the credits utterly fail to credit any of the composers and lyricists of the original songs, instead crediting soloists, arrangers, percussionists, producers, editors, and the artists who first popularized the song. First and foremost groups must credit the writers. Everyone else on the list is appreciated but optional.

The tracks could have been mastered with greater care (if they even were mastered; no one is credited for this). As an example, tracks 4 and track 5 have similar "instrumentation", but wildly different equalization. Bill Hare, Tat Tong, James Cannon and Michael Taylor all have their hand in production duties on various tracks and, while each delivers solid work, the end product is ever so slightly disjointed. But these are the gripes of the excessively attentive, not the casual listener.

Ultimately, few are the collegiate albums that bring chills or evoke tears. Childish Thing does both. Out of the Blue sings from a place of dynamic, playful artistry, not karaoke, and that makes Childish Thing, even with its flaws, a worthy addition to any a cappella collection.

I still remember quite vividly that April night five years ago when I sat in Alice Tully Hall watching a group of young men from England storm the stage with versions of Sex Bomb and Fat-Bottomed Girls that earned them a somewhat surprising second place finish in the ICCA finals — surprising, in that their performance was probably 35% music and 65% energy and attitude. But it was also 110% fun. I remember wondering: "Who did these guys actually have to beat to get here? I mean, how many other collegiate groups are there in Europe at the moment?"

With that as my clearest memory of the group (though I believe I've heard them sing live once or twice since then), I wasn't quite sure what to expect from Childish Thing, what is actually Oxford Out of the Blue's eighth studio album. Would I get lots of shtick and only minimal music-making? Or do the guys get serious when they go into the studio and/or have they upped their game in the intervening half-decade?

Further confounding me were the liner notes which include the following: "[Childish Thing] reflects the diversity of our musical tastes and performance styles. This CD is intended to divide opinion." And continues, "There may be bits that are out of tune or less than perfect. But that's what real music is: less than perfect. We hope you enjoy our imperfections."

What a delightful surprise to find, then, that Childish Thing is anything but childish work and does indeed capture the palpable energy that I remember from 2006 together without sacrificing the quality of the singing. I'll admit that I'm now perplexed — and in truth, a bit annoyed — by the liner notes for justifying and/or apologizing for imperfections that have been almost entirely obliterated by the studio recording process. But for Lullaby (which sounds like a live, group recording) and perhaps the intro to Shake Ya, the talents of Bill Hare, Tat Tong and James Cannon haven't left much in the way of tuning or blend imperfections. As a result, the lengths to which the group goes to preemptively explain that which does not really exist only comes off as disingenuous.

But back to the music which, for the most part, is terrific. The best of the uptempo — You Give Love A Bad Name and Harder To Breathe — are full, multi-part arrangements which deftly balance the need for a harmonic center with the sort of internal movement that creates momentum and energy (and some nifty syllable choices, too!). I wish the guys would lay off the tendency to substitute song interpolations (Living on a Prayer, I Don't Wanna Be) for bridges on songs that are too short to keep interesting, but I'll grant them that in both instances, it is done tastefully and nearly seamlessly so it's hard to quibble. As for slower material, the closing Cold Water is gutsy and gorgeous — an almost-choral arrangement that shuns most of the bells and whistles that have been ever-present until that point and shows off these gents' skills as pure singers.

The rest of the album is really a tribute to what energy can do. There's a fair amount that is good but not spectacular, featuring simpler, more unison moving backgrounds and repeating syllable motifs that drone on a little too long. But even in those slightly less-developed arrangements, the energy of the performance is unmistakeable and elevates the material from what would otherwise be just "pleasant" to "still quite enjoyable".

In the end then, my question from 2006 is irrelevant. It doesn't matter who they beat or whether the competition is on their side of the pond. If I had any lingering doubts about what Out of the Blue could really do, a Childish Thing erased them for me. Jolly good, blokes. Keep up the good work.

Even though Oxford University's men's group Out of the Blue remains a powerhouse on the ICCA circuit, it seems like its recording techniques and output have suffered from the increased notoriety. While a good album overall, Childish Thing comes across just as its namesake connotes: something a bit more childish than previous endeavors. The group should be farther along at this stage of the game. The inconsistent liner notes indicate they were going for a more laid back and "less than perfect" recording. They were very successful in accomplishing that goal.

Childish Thing lacks a robust sound and a mature vocal quality from a group that placed second in an international competition. Many of the songs sound like a group of guys simply having a bit of fun in the recording studio, instead of a group of artists putting out an album. And there is nothing wrong with that — the material that they've released works and is enjoyable. But by now the world is expecting a lot more out of Out of the Blue. Whereas it's not exactly anemic, the music doesn't pack the same punch as earlier recordings. There's simply nothing here as brilliant and chewy as Canned Heat from Redshift.

On the other hand, some of what the boys have given us is a lot of fun. And isn't the upside of something being childish. Kinda wild, carefree and exciting. You Give Love A Bad Name, Shake Ya, and Watermelon Man/Daytripper exude a youthful zest and playfulness.

As the opening track, You Give Love A Bad Name skims the cheesy pond without ever diving headlong into its murky depths when the arrangement seamlessly incorporates "Bon Jovi" into the backing vocals. It catches you off guard the first time you hear it, but even upon repeat listening, one should still smile at the inclusion of the band's name. Shake Ya is a great party number. The roughness of the soloist matches the grittiness of the original song while maintaining an OOTB flair for the fantastic. The Hey Ya bridge using "shake it, shake it..." and two verses goes on far too long. And it brings up the issues that many arrangers and reviewers have with medleys. The lyrical ending of "I know we're not both happy here..." doesn't lead grammatically into the joy that is Shake a Tailfeather. The arrangement would have been better if they'd relegated that overlay into a guilty pleasure of a few bars, but its inclusion doesn't diminish the awesomeness that is this track.

But what is wonderful is the combination of the Watermelon Man and Daytripper into one gloriously trippy number. Ed (no last names are indicated in the liner notes) is a genius for creating this arrangement. I wasn't familiar with the Herbie Hancock original song, but have since blipped it incessantly on my blip.fm station. The eclectic opening evolves slowly into this burst of joy and it's infectious!

And does any collegiate album in the new millennium really need two Billy Joel tracks on it? And a purposely out of tune Lullabye at that?

Most of the tuning issues with the recording are emphasized through the jarring disjunction between the soloist and the backing vocals. "Mah feet," really. Ugh ... George overemphasizes the "ah" syllable making Knock Me Off My Feet sound precocious. The same thing happens on Let Love Be Your Energy. The soloist "Harry" stresses the g-dforsaken "meh" vowel sound popularized in the '90s (and lampooned on a recent episode of Family Guy), so that at the song's climactic ending, the background's offering of a pure "me" syllable on the offbeat made me laugh out loud.

Granted, the group has now released three additional albums since Childish Thing was produced in 2009 as a divisive album capturing the live sound of the group. That's a lot of recording in a short amount of time. One can hope that they've recaptured the ballsy nature of the sounds of the past and really stepped up their game. So skip this one if you really don't need another Out of the Blue in your collection, or go to iTunes® and download Watermelon Man/Day Tripper today.