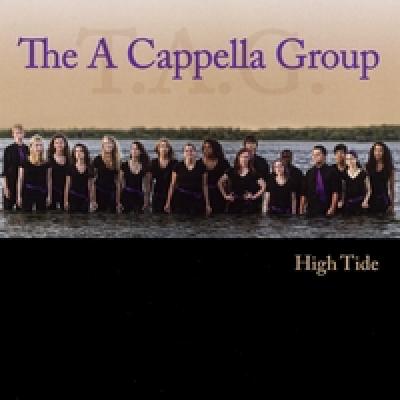 The A Cappella Group might be a high school group, but you'd never be able to tell just by listening to their album High Tide. This album is at the very least on par with collegiate groups these days. The A Cappella Group should be very proud of the album they've produced.

What I'm most impressed by is The A Cappella Group's soloists. Brittani Newland gives Suddenly I See that smiley feel it well deserves. Mama Who Bore Me sits perfectly in Eden Shelton's range. She brings the perfect amount of musical theatre to the solo to fit the song, but doesn't push it too far.

The best song is by far Many The Miles, which also features the best soloist. By the time the last track rolled around the first time I listened to the album, I had allowed myself to get distracted by Facebook. I completely forgot that I was listening to an a cappella cover of Sara B's hit — I was convinced it was the real thing. When I finished browsing through my News Feed and returned to the task at hand, I quickly realized that it was Taylor Nave killing the lead track, supported strongly by the rest of her group.

While the singing on this album is anything but young, there's one area that quickly makes me think that this album is immature: the production value. There are two mastering errors on High Tide that drive me up the wall. One: each track on this album has AT LEAST five seconds of silence tacked on the end before the next track starts, this silence lasting as long as ten seconds between Mama Who Bore Me and Walls Fall Down. These gaps made me feel awkward as a listener, and I found myself in the habit of glancing away from my notes and back to my iTunes to see if the album was over.

Mistake number two: as I uploaded the album to my iTunes, the artist came up as "A Capella Group". I did a quick double take, thinking I must have read it wrong, that the name of the group (also being the name of the genre we work in) couldn't be spelled incorrectly. But I was right the first time — it's spelled wrong. I was surprised by this carelessness. These may be two very simple mistakes, but I find them to be very glaring mistakes that had a huge impact on my first impression of High Tide.

High school a cappella has long been considered the younger sibling of its collegiate counterpart, eagerly following in the latter's footsteps yet lagging ever so slightly behind it. This sentiment more or less sums up High Tide, the latest from The A Cappella Group (TAG) of the Cypress Lake Center for the Arts in Ft. Meyers, Florida.

Let's begin with the song choice. For the most part, TAG stays in familiar territory and never quite manages to escape from the shadow of its older collegiate siblings. The songs are mostly high school standbys (Dreams, Suddenly I See) or "been there, done it better" renditions of collegiate favorites from yesteryear. I realize it seems a bit unfair to compare a high school group to the likes of Divisi, but listening to Mama Who Bore Me and Hide and Seek here made me long for the far superior versions on Roots. The overall sound on High Tide is fairly generic and does not have much passion or group identity. The off-the-shelf arrangements from Randi Stanley, the Kings Singers' Simon Carrington, and Jeff Everett and Laura Quinn of Two Weeks Notice are partly to blame: not terrible, they are not terribly interesting either.

The saving grace of this album comes in the form of three standout performances. Paul Gavin, the sole credited percussionist, turns in some impressive and versatile work throughout. Lauren Davis's earnest and beautiful mezzo is the highlight of the otherwise lackluster Talk To Me. But the real star of the show is Taylor Nave. She bookends the album with two standout performances that are mature, nuanced, honest and powerful: she absolutely wails on The Veronicas' Everything I'm Not (aided by a killer harmony line from Ms. Davis) and pours her soul out to rival Sara Bareilles herself on Many The Miles. College groups, you have been warned.

The wizards of Liquid 5th have brought out the best possible sound from this ensemble, but this is a rare case when I wish I could score Tuning and Blend separately. The tuning is very good, and the overall sound is polished in the way that we've come to expect from modern a cappella. I was especially glad to hear as much bass as I did, given the high female-to-male ratio in this group. The blend, on the other hand, is very uneven, and the issues stem more from timing than anything else. Mama Who Bore Me, for example, seems slower than the group is used to, and soloist Eden Shelton frequently gets ahead of the backing block.

If TAG can work on a tighter blend and make the performances their own (even if the arrangements aren't), I'm sure their next album will do us all proud.

Kids these days! I was lucky enough to have an excellent vocal program when I was in high school, but it was nothing like the a cappella program at Cypress Lake Center for the Arts. Their a cappella group, appropriately named The A Cappella Group, has all the polish and talent of a high-level collegiate group. The group's latest album, High Tide, is a remarkable achievement in the field of high school a cappella.

That being said, it is my job to review all albums according to the same metrics. So that means these high schoolers are being pitted not only against collegiate groups, but also against top notch professional groups. How do these kids hold up when compared to a cappella giants? Surprisingly well, actually.

What really struck me about The A Cappella Group is how mature the soloists sound. These aren't squeaky-voiced teens — they're confident, focused, and technically proficient. The backgrounds are well-tuned and well-balanced, backing up the soloists nicely. The production is fantastic, highlighted by a crisp and clean sound and some of the best sounding bass and vocal percussion I've heard in a while. The arrangements are simple for the most part, but are performed with confidence and energy. The intensity and build in tracks like Mama Who Bore Me and Walls Fall Down is very impressive; this group brings more energy and intensity than most collegiate groups, and many professional groups, too.

Of course, it's not a perfect album. Song choice is a bit of an issue — well-worn a cappella staples like Short People (though with some added vocal percussion) and Hide and Seek make obligatory appearances. And even though there's a lot to praise on the album, none of the tracks really stand out as being exceptional. This is a group that has the potential to produce jaw-dropping tracks, and it's unfortunate that nothing on the album quite rose up to this level. High Tide is absolutely worth your while, though, if for no other reason than to demonstrate that high school a cappella can be as exciting and intriguing as any other form of a cappella.

This album is available at CD Baby and the iTunes Store.