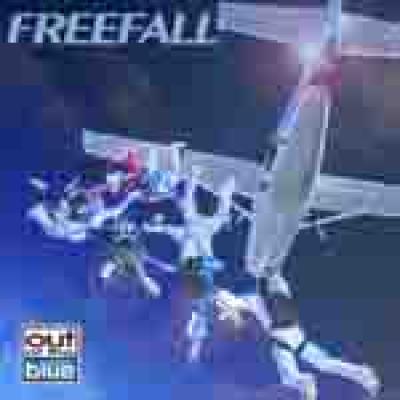 Out of the Blue sounds like a group with a grasp of the modern a cappella sound but a weak understanding of its underlying theory. Freefall wields the studio techniques of contemporary a cappella recording, but the album's arrangements exhibit few of the methods that make a cappella a compelling genre.

Freefall has the sonic hallmarks of today's a cappella album — meaty bass, separately tracked and mixed vocal percussion, and a front and center soloist. Out of the Blue is true to collegiate a cappella tradition, performing the usual collegiate variety of pop/rock covers, from Queen to Maroon 5, Jamiroquai to Seal. Two live recordings are complete with screaming and applause. Yet the album feels behind the times.

Bad arrangements are to blame. Backgrounds are stilted, stalling instead of building through key phrases. They feel blocky instead of fluid (choruses of It Must Be Love) are languid instead of taut (Tribute). Rather than create the illusion of bigness through multi-tracking, a few songs sound like five guys busking on the street (Fat Bottomed Girls). Many syllables are better suited to the dawn of a cappella, when our genre was mostly R&B or ballads, than to contemporary rock. A cappella left "nee noo" guitar solos behind years ago (Faith).

The group's blend is patchy; slower songs are smooth (I Miss You, She Will be Loved) while upbeat songs are ragged (take your pick). Bad pitch haunts many tracks, and reserved soloists don't galvanize the listener to forgiveness. The vocal percussion rhythms are smart, but the VP is forced too often to cover up sloppy background timing (Tribute, 5 Colours In Her Hair).

Most of Freefall's faults violate today's primary a cappella axiom: "trick and surprise the ear". The album seems workmanlike; arrangements are vessels by which Out of the Blue earns the right to sing rock songs in front of a crowd. The great college a cappella groups of our time left this approach behind in the early '90s. The Beelzebubs have evolved into masters of musical mimicry, transforming our too often imitative instrumentation into an art of the highest compliment. Off the Beat seeks to forge the human voice into a force as aggressive as the distorted hard rock guitar, yet more human, relatable, and resonant. Out of the Blue understands basic a cappella mixing, but the group has much to learn about exciting arranging.

Out of the Blue is noticeably stronger on love songs. A widely mouthed bass line and tightly executed percussion establish a fluid mood in I Miss You. The offbeat and constantly moving baritones complement this mood base nicely. A mellow and sensitive solo performance is strong without volume, reserved yet emotive. I don't understand — but I did enjoy — the whistled chirps and hiccuppy tenor line exiting the choruses. This arrangement is the most layered and engaging on the album. Kiss From a Rose feels reserved, lacking soul, but the tuning is good, the percussion accents what the background is doing, and the syllables fit the song's R&B roots. She Will Be Loved, covered to totality in American a cappella, benefits from a smoky voiced soloist and mellow, laid back treatment in the verses. Intonation problems in the higher voices damage the choruses, but the verses are worthwhile.

Freefall is recent songs arranged in dated style and mixed to a semi-mod gleam. Most out of step college groups do things the other way, with layered, spirited arranging and no clue how to record. Out of the Blue has potential, and I encourage the group to spend more time listening to the best of a cappella and exploring the mental side of our craft.

It is good to know that the interests for the average college-aged male seems to be the same on both sides of the pond. In case it isn't obvious from the tracklist on Freefall, the fourth album from Oxford University's Out of the Blue, that would be sex: sex with romance, stalker sex, sex with no commitment and a comedic battle with the Devil. She Will be Loved, 5 Colours in her Hair, Faith, two unnecessary versions of Fat Bottomed Girls and It Must Be Love (or in OOTB's case, "BREASTS", as they shout in the middle of the arrangement) make my case. Nothing like taking a theme and sticking with it, guys: it says a lot for consistency and knowing your subject matter well.

The album is completely average on all accounts. The tuning suffers where it normally does and soloists stretch for upper notes they don't have. The ten arrangements fall on a continuum between overly busy and too sparse to support the melody. Intonation throughout the voices is mired by a buzzy quality that grates on the nerves and the vocal percussion is solid if somewhat square.

But the guys and the songs are just different enough to make the album worth listening to at least once. Unless you are hip on the UK music, you've probably never heard of McFly or Madness, or know the b-side tracks by Blur, Incubus and Ben Folds 5, or realize that Jamiroquai is still a superstar. The enjoyment they get out of singing is apparent on every track (especially the live version of I'll Be There For You. What the group fall short on in terms of strong musicality, they more than make up in terms of passion. Who isn't passionate when singing about sex?

I like arranger Daz Chadwick's use of an ethereal Freedom '90 as the introduction to Faith and the polyphony of songs Michael Humphrey includes at the end of One Angry Dwarf which recapitulates all of the versions of sex-obession on the rest of the album.

I hate that I can't view the video of their version of No Diggity. I'm sure that would have been a treat.

If import costs aren't prohibitive to you and you want some international collegiate flair in your collection, pick up Freefall. Otherwise, let it fall by the wayside and listen to the clips online.

Oxford's Out Of The Blue has surfaced in the United States with their fourth studio album, Freefall, and the album's title is a good descriptor for the sound produced therein. Freefall is not a good album, just barely hanging onto the mediocre label that accompanies so many collegiate recordings these days.

Many issues plague OOTB, and based on the live recordings at the end of the album, it's not just a recording problem. First of all, you can only go so far with middle-of-the-road voice talent. There is not a single standout solo, and the backup parts often suffer tuning issues. Secondly, the songs are not arranged to allow the parts to create a cohesive sound. The voice parts do not complement each other. It is important in recording an a cappella album that each singer knows how his part fits into the song so that it sounds as if all the parts were sung together. Out Of The Blue has not mastered that skill. Another problem is that the arrangements are too busy. OOTB tries too hard to make a creative and interesting arrangement. It works sometimes (I Miss You), but mostly it takes away from the song (Fat Bottomed Girls).

It sounds as if OOTB's success is based on its humor and live performance. That's all well and good, but it's very difficult to directly translate that onto a studio recording. It's a rare skill that few have accomplished (e.g. Da Vinci's Notebook, Moosebutter), and even then it's the professional groups that have found success in it. When OOTB realizes this and adapts their style for their albums, they will be better off.