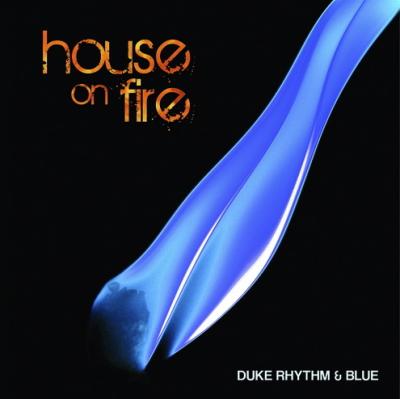 With four 2011 CARA nominations to its credit, Duke Rhythm & Blue's House On Fire is an album you probably didn't need me to tell you to pick up. But if you haven't yet, do yourself a favor and do so immediately.

Five years removed from their merely OK With the Windows Down, Rhythm & Blue have turned out one of my favorite CDs of the year thus far. And not just any old CD, featuring a haphazard collection of songs from the group's current repertoire, but an honest-to-goodness attempt at a "concept" album, telling a story that begins with an alternate definition of the phrase that makes up the CD's title.

In truth, House on Fire might be considered a bit misleading as this is not a CD that burns brightly — rather, it's a slow, steady sizzle, built on a myriad of sampling and VP loops expertly assembled by Dave Sperandio, for whom this sort of thing is a particular specialty. To be honest, there's still a purist in me that resents the burden that this sort of super-human VP removes from the arrangements, which often would be pretty empty and unfulfilling without the technologically-added groove (read: you can't help but wonder how this material comes off in a live setting). But the first "r" in RARB stands for "recorded", and computer-generated or not, the overall, cumulative effect of everything coming together — human or otherwise — on this particular CD is fantastic.

Were it just the post-production bells and whistles, though, I suspect my enthusiasm would be significantly mitigated. But what Rhythm & Blue showcases here is not just good taste for engineers and producers, but also first-rate singing, inspiring energy and killer soloists — that last item being the most thrilling component of this CD. To a woman, the female solos on House on Fire are phenomenal, with Amber Sembly's CARA-nominated turn on Alone being a particular highlight, though Brittany Duck on Soulmate and Abbey Bucher on The Story are right there with her. And lest the men be forgotten, Peter Park shines on the opening and closing tracks, while Matt Campbell does a nifty job with Chris Brown's Crawl and Drew Vincent does a nifty job with the sardonic tone of Alcohol.

A few words on Peter Park while we've on the subject, since his efforts on featured on seven of the ten tracks and he may be one of the only people (if not the only person) I can recall taking solo, VP, and arranging credit on the same track on a collegiate CD (The Sun). As I've said so many times before, it's very hard for one person to keep things artistically fresh and new and interesting on an a cappella CD and Park's arrangements do have a somewhat simplistic feel to them at times, especially when the VP and bass loops are stripped away. But they still manage to work and occasionally, as in the case of Soulmate, even the arrangement — with its development, build, variation and inventiveness — lives up to the excellence of his other contibutions.

So why are you still reading this? Like I said at the top: go buy the CD and enjoy.

House on Fire is the kind of album any collegiate a cappella group would surely like to claim as its own. This album absolutely glistens with competence, confidence, and energy. All of the soloists are great, some of them absurdly so. Really, just a few arrangements that are a bit weaker than the rest keeps House of Fire from being a total inferno of awesome.

Before the customary and well-deserved highlights, I want to discuss this album, and this group, at a more general level. Rhythm & Blue was nominated for 2011 A Cappella Community Awards for both "Favorite R&B or Hip-Hop Group" and "Favorite Mixed Collegiate Group". The R&B/hip hop thing has me a tad puzzled, as I've never seen Rhythm & Blue in this light. Turns out their R&B/hip hop numbers are the best tracks on House on Fire, full of sizzle and punch, but House on Fire is definitely not an R&B/hip hop album (just scan the track list). The trend in the collegiate circuit these days is to include a few such numbers to showcase cool production. But anyway. I just felt it was important to discuss how the group is being viewed.

Now on to the specifics. Rhythm & Blue created House on Fire as a "concept album that chronicles the evolution of a relationship". That it does. I particularly enjoy "The Love" and "The Struggle" era (as noted by the group), which includes The Story and Love the Way You Lie. Lead Abbey Bucher can really, really handle Brandi Carlile. I could listen to The Story all darned day. And the way Brian Watts handles Eminem on Love the Way You Lie is so good it's chilling. When he delivers: "If she ever tries to leave again, Ima tie her to the bed and set this house on fire", it's just so epic and frightening. Definitely the best a cappella rap I've ever heard. Amber Sembly is another soloist who needs recognition, since she absolutely soars on Alone. Rhythm & Blue is lucky to have such keen talent.

Basically the tracks which scored "4"s feature arrangements that could have been more interesting. (Let us not forget that "4" still means "good" around here.) The one that bothers me the most, because the song is so cool and the soloist is so red hot, is Alone. I love the unexpectedness of the overall arrangement, which is very sensitive and poignant, but the Rascal Flatts mix-in on the bridge just pulls me out of the spell every time. Sometimes a good song can just stay, and be what it is. You know?

But overall, I really enjoy House on Fire and respect Rhythm & Blue. This album is definitely one you'll want to own, and one you'll end up recommending to others.

Rhythm & Blue's House on Fire claims to be a concept album, telling the story of a relationship. While I'm not sure about the 'concept' part, they've knocked 'album' out of the park.

House on Fire has, for the most part, a tight, unified style, at least partially due to the multitude of arrangements by sometime musical director and percussionist Peter Park. Park's arrangements run the gamut from the intense, sizzling Closer that opens the album to the triumphant The Sun that closes it. The Sun is particularly nice, moving from turntable to horns in the intro, stepping back into a walking groove and scat feel, crescendoing into staccato horns at the climax, and sauntering off into the distance. All of this is underlaid by a variety of textures from Park's tightly processed but still organic percussion. It is a thing of beauty.

I could write enough about the arranging to fill the entire review, but let me just note a few other highlights. Park's The Story and Matt Emery's Gardenia are very different but equally effective ballad treatments with wonderful attention to syllables. The Story has bell tones in the block shifting through normally obtrusive sounds like "doan" and "blue" and a standard progression of "jin jo"s, but they never become aggressive, Off the Beat-style hard edges. Rather, the syllables become secondary to the sound they create, placing the focus on the overall effect rather than the specific combination of consonants, which is as it should be. Gardenia, on the other hand, maintains its forward motion through and almost sleigh-bell-like effect created by some very effective syllable choices in the block and a contrast between staccato and legato chords.

The top-notch arranging is strongly complemented by Dave Sperandio's tight production, wrapping each track into an exquisite package. In particular, the mixing makes really nice use of the stereo space: many of the lines move quickly between left and right for a feeling of immersion, and the panning in the percussion serves to separate the distinct parts of the vocal kit.

But all of the arranging and production in the world would only do so much if it weren't backed up by solid performance. These guys have chops. Everything is executed with style and panache and just the right level of energy. None of the soloists is a weak link, though the men come off as slightly lesser only because the women are so strong, knocking out Soulmate, Bleeding Love, and Amber Sembly's command performance on Alone, which is not only the first time I've actually enjoyed the song, but also a performance strong enough to pull me back for repeat listens.

This is an album that not only paints well in broad strokes but also captures a host of subtle nuances and nails them all. It stands up well to closer examination, but most listeners won't go that far. They'll be too busy rocking out with Rhythm & Blue.